Look Out, Look Out, the Pannyman: The Bughouse Affair (2013), by Marcia Muller and Bill Pronzini

Well, here I am reviewing a new book!  That doesn't happen too much on this blog.  Still, The Bughouse Affair is a historical mystery, and it's by veterans Marcia Muller and Bill Pronzini, editors of 1001 Midnights, that classic comprehensive compendium of criminally good crime fiction from over the many decades (people who enjoyed Book to Die For and aren't familiar with 1001 Midnights should track it down); so it's appropriate enough for The Passing Tramp. 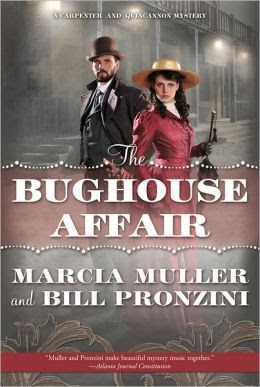 This is not a super-serious crime novel, but rather a lightly entertaining one in the mode, I think, of some of John Dickson Carr's wonderful historical mysteries.  Criminy, there's even a locked room problem!

The novel is interestingly constructed around two separate investigations of two separate problems conducted by Sabina and Quincannon (this is how the authors refer to them)--which of course we know will ultimately connect!

Sabina is trying to catch a pickpocket, Quincannon a housebreaker (or pannyman, to use the criminal lingo of the book).  Chapters are alternately headed Sabina and Quincannon, and we get a good sense of the two authors' distinct writing sensibilities in the chapters on "their" respective detectives.

Sabina is more empathetic and level-headed and less self-centered than Quincannon, who, nevertheless, I found to be a lot of fun (his immodest credo is that he will die in bed at the age of ninety--and not alone).

Once the first murder is discovered about a-third of the way into the novel, the pace picks up and we get an intriguing, fair play puzzle.  The second murder offers no less than a locked room problem, which is always great to see (and unexpected) in a modern crime novel.

Something else I enjoyed in this book (I'm not giving anything here, since it's discussed on the flap) is the presence of a man claiming to be Sherlock Holmes. Quincannon thinks the man is crazy, "bughouse," since everyone knows Sherlock Holmes died at Reichenbach Falls!

The presence of this bughouse Sherlock has been criticized by a few people on Goodreads, I noticed, who have deemed him irritating.  The real Sherlock Holmes was never irritating, they cry!  Personally I was much amused with the demystifying approach to the Great Detective (a parody) that is taken in The Bughouse Affair.

Quincannon finds the bughouse Sherlock especially exasperating, because Quincannon himself likes to be the star of the show and his rival really is rather an insufferable know-all.  Not everyone is as self-effacing as Watson!

The resolution of the novel cleverly finds each detective--Quincannon, bughouse Sherlock and Sabina--making an important contribution in untangling the web of mysteries.

Finally, I should note that I loved some of the passages in the Quincannon chapters, because they so reminded me of a certain detective who shall not be named (let's say he shall be left Nameless):

Quincannon muttered five short, colorful words, none of them remotely of a deductive nature.

[Luther Duff] was short, round, balding, fiftyish, and about as appetizing as a tainted oyster.

I also enjoyed Quincannon's visit--for investigative purposes only--to the "parlor house" Fiddle Dee Dee, and I was deeply intrigued by the reference to the Hotel Nymphomania.  Maybe we will see something of the latter in the next book!

Of course, there's a will they or won't they? aspect to the relationship between Carpenter and Quincannon left unresolved at the end of The Bughouse Affair.  For the answer to that question and what will assuredly be another good mystery, I await the next novel in the series!
Posted by The Passing Tramp at 2:48 PM