It was X in the Bedroom with the Candlestick: Written in Blood (1994), by Caroline Graham

Actually, they don't have bedrooms in Clue/Cluedo, do they?  Or bathrooms?

I suppose they must all be on the upper floor (surely the Boddy mansion has an upper floor).

Anyway!  In the book under consideration here today, Caroline Graham's Written in Blood, the victim, Gerald Hadleigh, indeed is murdered with a candlestick--at his home, Plover's Rest, not long after a meeting of the Midsomer Worthy Writers' Circle, to which he belonged.

That's about where the similarity to the game Clue ends, however.

Although Written in Blood triumphs as a puzzle (see near the end of this review), much of the interest in it lies with Graham's amusing, satirical writing and well-conveyed characters.

Written in Blood centers on the members of the aforementioned Midsomer Worthy Writers' Circle, a group of would-be (some more likely never-to-be) authors in one of those classic English villages that make such enticing settings for horrible murders. 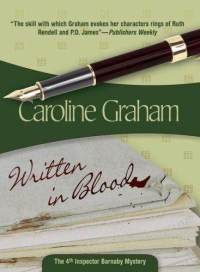 These people are, along with Max Jennings, the bestselling novelist they somehow managed to get to come and speak to them, and Graham's series characters Chief Inspector Barnarby and Sergeant Troy, the key figures in the novel.

Some fans of the long-running Midsomer Murders series, which originally was directly based on Graham's short series of detective novels, have complained that Barnaby and Troy (particularly Troy) are not as likeable in the books as on television.

I can well see this in the case of Troy--though I've never actually seen an episode of Midsomer Murders, bar The Killings at Badger's Drift many years ago--since Troy is a boorish, sexist homophobe who cheats (or tries to) on his wife.

Does Graham endow Troy with any virtues at all?  Well, he likes his two-year-old daughter--though that doesn't stop him from cheating on her mother--and he likes dogs.  That's about it, I think!

Yet there are times when Troy actually is funny, or I think so (but then I like Joyce Porter's Dover mysteries).

Here he is with Barnaby during the questioning of a suspect:

Troy was taking advantage of the lull to despatch as many Garibaldis as he was able without appearing to push them non-stop into his mouth.  He was starving.  Parched too (down went the tea), plus, needless to say, desperate for a fag.  He caught the chief's eye and replaced morsel number five on the plate.


Then there's this, when the suspect is about to suggest that Gerald Hadleigh must have been killed by a burglar:

In the books, Barnaby and Troy really don't like each other much at all, and their antagonism/indifference can be kind of amusing.

I liked this terse exchange between the duo, which takes place when Barnaby and Troy visit the law firm Jocelyne, Tibbles And Delaney.  While waiting for the murdered man's lawyer finally to appear, they encounter a striped cat curled up, fast asleep, on a chair (note that one of the novel's plot strands involves Barnaby and his wife having to take care of their daughter's rambunctious kitten, Kilmowzki):

Graham's team of Barnaby and Troy rather reminds me television's Inspector Morse and Sergeant Lewis and Ruth Rendell's Wexford and Burden (granted, a less personable version, especially in the case of the underlings).

Like Wexford, Barnaby is happily married and having to diet on account of his health (though unlike Wexford, he can understand computers).

Troy also partakes, methinks, of Reginald Hill's Dalziel, although there of course the roles are reversed, Dalziel being the man in the superior position.

Although Written in Blood was published in 1994, it already seems like an eternity ago!  I was struck by the fact that in the book women are virtually non-factors in the police force.  Indeed, part of the interest of this novel, I found (somewhat to my mortification), is that it already feels like a piece of social history.

Fortunately, there are interesting women characters among the suspects: Amy and Honoria Lyddiard, Sue Clapton and Laura Hutton.  In fact Graham grants three of these women character arcs.  We read Written in Blood not just for the puzzle, but because we become concerned about what will happen to these characters.

Laura was madly in love with the murder victim and joined the writing group just to get closer to him.  She's a sensible, successful woman (an antique shop owner), who was, however, becoming an obsessed stalker.

Graham is at her most scathing with Honoria Lyddiard and Brian Clapton, both of whom make Sergeant Troy look like a candidate for Mr. Congeniality.  Both are unbearable class snobs, Brian of the inverted variety.


Honoria is of the old gentry, and obsessed with her lineage (she's compiling a book on the subject).  Brian is a radical leftist, ashamed of his bourgeois upbringing.  He teaches avant-garde--and absolutely hopeless--drama to toughs at a local comprehensive school.  At times, this sub-plot starts to feel like it's running away with this long (435 pages) novel, but it's very funny and, at times, rather pathetically sad (incidentally, the way Graham portrays British comprehensive education is devastating, if anywhere close to the truth).

Brian is so self-deluding ("Brian, now so relaxed he had put his slippers on, was explaining [to Barnaby and Troy] how he had rejected Cambridge as too elitist choosing instead Teacher Training College in Uttoxeter") that one is tempted to feel sorry for him, but Graham gives Brian not a single reed of redeeming personal virtue for the would-be sympathetic reader to grasp.  Instead, all one's sympathies go to his long-suffering (and genuinely talented) wife, Sue.

There's pungent satirical lines scattered all through Written in Blood.  I feel I must quote some of them: 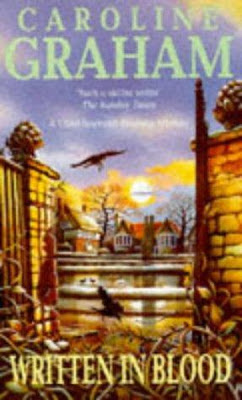 Barnaby could imagine [Honoria] on the seashore forbidding waves their approach.

And the net-curtain brigade, those invariable peepers at life's rich pageant.

There was a permanent obstruction in her throat that only liquids over forty per cent proof seemed able to bypass.

On top of all this, the puzzle in Written in Blood is excellent.  There's one aspect to it that I quickly grasped, but the bigger picture eluded me.  Realistically, I think the reader should be able to pare the suspect list down to three individuals, but the true motive is splendidly, though fairly, hidden, I think.  One might quibble about the way a couple characters behaved, but overall I was really pleased with the mystery's resolution.

My one real complaint is that there is a confrontation at the end that struck me as overly melodramatic (perhaps it played better on television).  I think that as a novel Written in Blood would have been stronger if this confrontation had been dialed down several notches.

Oddly enough, in some ways Written in Blood reminded me a bit of Freeman Wills Crofts' Golden Age police detective novel, Sudden Death (1932).  Its ending went over-the-top as well, in my view.

Also, as a matter of personal taste, there are a few instances of scurrility I could have done without (a couple images I'm still having trouble getting out of my mind, ugh!).

For me, then, Written in Blood may just miss the very top mystery drawer, but it's very good indeed and heartily recommended to fans of classic satirical English village mysteries, a noble line descended from some true Golden Age classics by Agatha Christie

Five of Graham's mysteries have been reprinted by Felony & Mayhem, so check them out, if you haven't!
Posted by The Passing Tramp at 9:58 AM