However, Australia aside, there is not a great deal in common between the earlier book and the later ones.  Highly satirical, Death of an Old Goat is an entertaining tale (at least if one is not Australian), yet still a 'prentice effort.  The later works, Last Post in particular, represent Robert Barnard at mature talent.  In fact, Last Post is the best modern-day, classical-style English detective novel that I have read in some time. 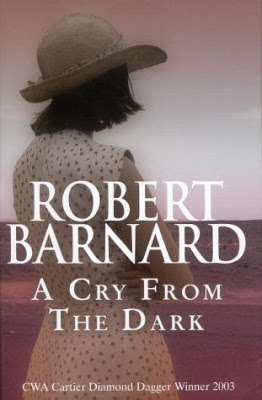 Much of A Cry from the Dark--as its title, which borrows rather obviously from the Oscar-nominated 1988 Meryl Streep film A Cry in the Dark, suggests (though no dingoes are involved)--is set in Australia, but only in the past, in the Australia of 1938.  Half the novel takes place in the then present day of 2003, in Britain.

A Cry from the Dark tells the story of Bettina Whitelaw, an esteemed octogenarian grande dame of British literature writing the memoirs (or a fictionalized novel) of her earlier life in the outback Australian town of Bundaroo.  The narrative intercuts from modern-day events in Britain to Bettina's past life in Bundaroo in 1938, when a shocking act of violence occurred that forever altered the course of her life.

Now in 2003 it seems that Bettina is again threatened with violence.  Who is the source of this new threat?

Barnard's American publisher, Scribner, insists on calling Barnard's crime novels "novels of suspense," which I find rather an anachronistic term that fails to do them justice.  Some suspense-hungry modern day readers may find them, in fact, too slow-moving, with their emphasis on elderly characters, lack of overt sex and violence, explorations of events in the past and deliberate conversations.  Personally, I find many of Barnard's books fascinating.

Especially interesting in A Cry from the Dark is Barnard's portrayal of Bundaroo, such a backward place that it makes the New South Wales city of Armidale--also mentioned in Cry and ridiculed by Barnard in Death of an Old Goat--look positively sophisticated by comparison.

Much of A Cry from the Dark succeeds as a sort of coming-of-age novel (indeed, I couldn't help wondering whether Barnard might not have been better off setting the entire book in the past).  In contrast with Death of an Old Goat, Barnard's portrayal of Australia in A Cry from the Dark is rather nuanced--and all the more convincing for that.

The final explanation of the twin mysteries is the sort that is bound to generate debate and disagreement, I would think, though I feel Barnard sets up the psychological path that he follows (whether one buys it or not). 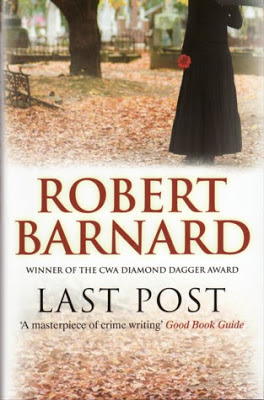 Only a small section of Last Post takes place in Australia, yet like A Cry from the Dark, Last Post concerns events in the past and has a large cast of elderly characters.

After the death of her recently retired school headmistress mother, Eve McNabb, at her mother's home settling affairs, gets a letter in the post that unsettles everything she thought she knew about her parents.

Eve begins an investigation into her past, with the help of an Omkar Rani, an English cop of Indian origin.  What they find results in murder in the present day....

Last Post is one of the most "Christie-esque" novels by Robert Barnard, a modern crime writer who, in contrast with some of the big names in the field today, greatly respects Christie's contributions to the crime genre.

However, in his "Appreciation of Agatha Christie," A Talent to Deceive (recommended, by the way), Barnard writes rather dismissively of some of Christie's late novels, including By the Pricking of My Thumbs (1968):

Begins rather well, with a vicious old aunt of [Tommey Beresford's] in a genteel old people's home, but declines rapidly into a welter of half-realized plots and a plethora of those conversations, all too familiar in late Christie, which meander on through irrelevancies, repetitions and inconsequentialities to end nowhere (as if she had sat at the feet of Samuel Beckett).

Certainly By the Pricking of My Thumbs meanders, but I find it rather an enjoyable book nonetheless. And, indeed, it would seem that Robert Barnard himself really does so as well, because Last Post is quite obviously influenced by Thumbs (I won't say it's "all Thumbs," so to speak, but it is partially so).

Besides the basic plot pattern of the investigation of mysteries from the past (which is a recurrent pattern in Barnard's work as well as Christie's), there is a vicious old lady named Aunt Ada in Barnard's book--obviously an homage--and there also is a garrulous old lady named Mrs. Lancaster (any reader of Thumbs will remember Mrs. Lancaster).  Probably not coincidentally, Last Post was published in 2008, forty years to the dot after By the Pricking of My Thumbs.

Another thing Last Post has in common with Christie's work is the uncommon finesse of the plotting.  I don't want to go into detail, but there are a couple twists--one on the last page--that show Christie-like genius in conception and execution.  Fair play and psychologically acute clueing of this order is a rare and precious thing and Barnard in my view has not been sufficiently praised for it.

Last Post is a book that deserved more recognition, in my opinion.  I believe that it is superior to the novels P. D. James and Ruth Rendell have been writing for the last dozen years or so.  It also is the best book by Robert Barnard that I have read since his A Scandal in Belgravia (1991).

If there is a flaw in Last Post, it is in the romance that blooms all too quickly between Eve and Omkar.  I admire Barnard's verbal economy--all too rare in these days of self-important crime novels--but perhaps here he needed a bit more spaciousness for full believability.  Still, love at first sight is a classic convention of fiction, after all, and it certainly was common enough in Golden Age mysteries.

This nitpick aside, however, I found Last Post a superb crime novel.  Reviews of Barnard's last novel, A Charitable Body (2012), were not great--indeed, this work has been compared, ironically, to late Christie for being meandering and confusing--and it seems that Robert Barnard may now have retired from writing fiction.  If he has indeed done so, at least Last Post should stand as a last testament to the work of a genre master.

Last Post delivers.
Posted by The Passing Tramp at 5:35 PM