Opinions differ over the matter of what is "the best" crime novel by Fredric Brown (1906-1972). Some people say The Fabulous Clipjoint, some Night of the Jabberwock, some say The Screaming Mimi, some The Far Cry, some yet something else.

In the 1990s Vintage's excellent Black Lizard imprint reprinted some Fredric Brown titles, including The Far Cry, but it has since let him lapse.*

*(last year a $75 edition of The Far Cry was issued by Centipede Press in a limited edition of 300 copies, now sold out; that is very nice, but surely there is some middle ground between high-end and dead-end!).

This is good for these writers, but too bad for Brown!  I think Brown's comparative neglect is a shame, because he is my personal favorite of the bunch.

It is hard to see why a book like The Far Cry is so overlooked today. Unlike Brown's Murder Can Be Fun, reviewed here last week, The Far Cry is not remotely humorous or "light."

The Far Cry has that "noir" quality of despair and impending doom that is all the modern rage, combined with a Christiesque plotting skill that is rather less respected today (among Brown's contemporaries, I would compare his plotting deftness to that great psychological suspense writer Margaret Millar).

In his critical biography of Fredric Brown, Martians and Misplaced Clues (1993), Jack Seabrook has written acutely about The Far Cry, though he gives away plot spoilers right and left and I can't do this, here, on a blog.  So I will try to be circumspect!

George Weaver, a Kansas City real estate man--married, rather unhappily, with two kids--is recovering from a nervous breakdown near Taos, New Mexico (there appears to be quite a bit of autobiographical detail in The Far Cry, as well as Brown's usual depiction of nearly non-stop alcohol consumption among his characters, which also may well be autobiographical).

In Taos George comes across an eight-year old local mystery in the "Lonely Hearts" knifing murder of pretty Jenny Ames by an artist named Nelson. He sees a chance of making some money by writing an article about the murder, but he becomes increasingly fascinated with the case for its own sake--or, really, for the sake of Jenny Ames. Meanwhile George's slovenly wife, Vi, comes to join him in New Mexico, and the novel develops two wicked prongs of interest. At this point, it takes an abstemious reader indeed to stop reading. 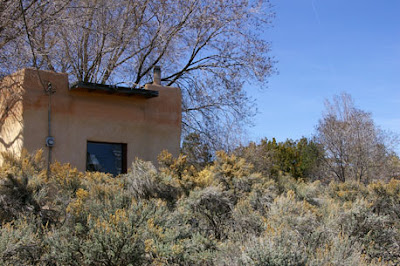 With its strongly-conveyed setting, high degree of narrative suspense and deft plotting, The Far Cry is a classic among crime novels.  Why it does not get the attention of a number of Jim Thompson or David Goodis titles I don't know (the two latter authors have now both been canonized by the Library of America). Could it be Brown's plotting genius that is held against him? In some literary circles it seems that cleverness can be something of a crime.
Posted by The Passing Tramp at 7:37 PM