There was a lot of good British crime fiction published in the 1980s and 1990s, when I was in high school, college and graduate school, by what I think of as the "Silver Age" of detective fiction generation, those who were actually born during the Golden Age of detective fiction (c. 1920-1940): P. D. James, Ruth Rendell (and Barbara Vine), Caroline Graham, Dorothy Simpson, H. R. F. Keating, Reginald Hill, Peter Lovesey, Robert Barnard and others.

A writer born after WW2 who joined the ranks of these authors in the 1990s was Minette Walters.  In rapid succession she published the much-praised trio of novels The Ice House (1992), The Sculptress (1993) and The Scold's Bridle (1994).  I had never read her next book The Dark Room (1995) and in fact did not like some of her later ones; but having mentioned her in a recent blog post I decided to take a look back at some of her work again. 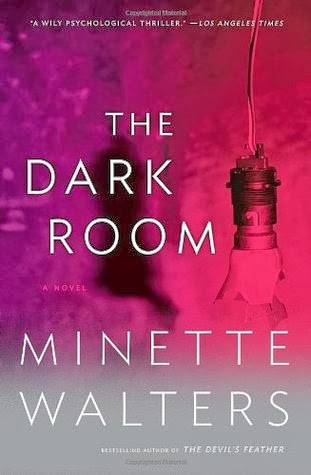 In The Dark Room, we are dealing with that old chestnut, the person who wakes up in the hospital, afflicted with memory loss.

In this case, it's only the last few weeks that the woman, Jinx Kingsley (prominent photographer and millionaire's daughter, as the back of the book blurb says), has forgotten. The police believe she has twice attempted suicide in that interval, and worse news is yet to come.  It seems there has been a savage double sledgehammer murder, and Jinx and the various members of her family are implicated....

This is a smoothly written book that reads quickly despite its length, as is characteristic of the better modern crime fiction, in my view.  In her 2002 Desert Island Discs interview, Walters spoke of her work as a "clash" between Agatha Christie and Patricia Highsmith and I think this is a fairly apt characterization.

In many of her books, especially in the 1990s, Walters deals with the village and upper class white social milieus that are familiar from classic British crime fiction from the 1930s. Of course there is also a greater coarseness and franker depiction of "unpleasantness," with a good sprinkling of f-words and sexual material, as well as, in The Dark Room, some thuggish, misogynistic cops.

For all that, however, The Dark Room is really not so different from Christie.  Lower-class characters are practically invisible, and those that one does see tend not to be impressive specimens.  There is also a parvenu rich family that wants to marry into the landed gentry. Then there's the stage" gay character (i.e., campy as hell, with a lot of darlings! and I mean, reallys! and such) and though black people are referred to, they remain out of the picture.

Even the pathologies with which Walters deals are not unknown in what P. D. James dismissively and uncharitably refers to as "Christie-land."  Christie so rarely gets credit for the darkness of some of her books (And Then There Were None, Endless Night) or her willingness to deal with outright mania.

When I finished The Dark Room I found myself thinking, well, it's really not so different from, say, Christie's Murder Is Easy (this is not a tip-off to the identity of the culprit in The Dark Room). And of course Christie is famous for her unreliable focal characters and the reader will be wondering for much of The Dark Room just how reliable Jinx is with her recovered memories.

All in all, Walters has fashioned a suspenseful and complex narrative that is reminiscent of Christie's crime fiction, as well as Ruth Rendell's (though it's not really a fair play mystery, unfortunately).

I did feel a certain hollowness when I finished the book, however.  I doubt the characters will stay with me as they do in the best work of James and Rendell (or, dare I say, Christie). Even Caroline Graham's less obviously ambitious Written in Blood had stronger characterization, I think. In the end, Walters' book comes off mostly as an exercise in narrative cleverness, which, ironically, is precisely what a lot people say when they want to dismiss Agatha Christie.
Posted by The Passing Tramp at 1:42 PM