Worsleying Around with the Golden Age of Detective Fiction: A Very British Murder: The Story of a National Obsession (2013), by Lucy Worsley, Part One 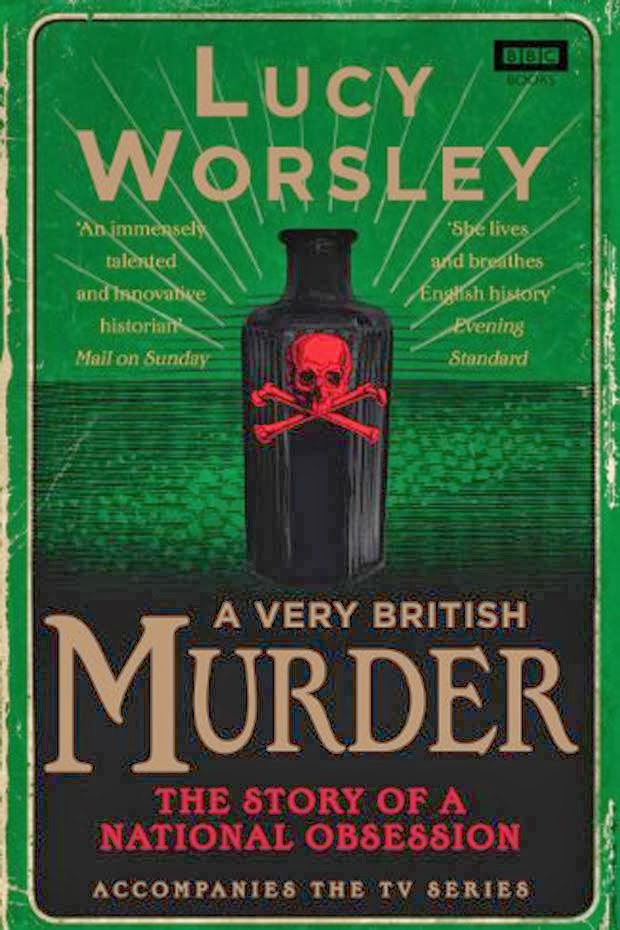 The latest book by popular historian and British television presenter Lucy Worsley is A Very British Murder: The Story of  a National Obsession (2013), which details, in about 80, 000 words, Britain's remarkable fascination with murder in fact and fiction since around 1800 into the mid-twentieth century.  It is the companion volume to a 2013 three-part British television program.

About a-third of the book's text addresses the Golden Age of detective fiction.  This is what I shall deal with here, as this is my special area of interest in the mystery genre.

In her note on sources, Worsley particularly highlights the following works:

This list indicates to me why Worsley's Victorian section is better than her Golden Age section.

Julian Symons' Bloody Murder remains a valuable source on crime fiction, but it is marred, in my view, by the author's determination to drive home his thesis that Golden Age detective fiction was fatally restricted by artificial conventions (the so-called "rules"), making it inevitably inferior to the "crime fiction" of modern times, with its much-heralded psychological and social realism.  And P. D. James' Talking about Detective Fiction, a very brief book of about 45,000 words or so, is more problematic than Bloody Murder as a source for a general history, in my opinion.

James shares Symons' view that modern crime fiction is clearly superior to Golden Age detective fiction, though she is more favorable than Symons to the Crime Queens Dorothy L. Sayers, Margery Allingham and Ngaio Marsh (on the other hand, Symons is more favorable to Agatha Christie).

James is always an elegant and enjoyable writer, but in Talking she does not really add to what Symons already did and sometimes gives us much less. James' discussion of American mystery writing, for example, would lead an uninformed reader to believe that virtually all American crime writers wrote hard-boiled mysteries, which is far off the mark indeed.

Relying mostly on James and Symons (Colin Watson's chestnut Snobbery with Violence, 1971 gets tapped too), Worsley has produced an account of the Golden Age that to me is often unsatisfactory.

In the years following the First World War, people wanted leisure reading to numb, not to stimulate, their capacity for experiencing horror.

However, by 1939 something had come to seem a little too cosy about elderly ladies solving puzzles in vicarages.  Graham Greene, with his insights into the mind of a killer, and James Bond, the swaggering spy, made them seem completely old hat.  The old-fashioned detective may dodder on in fiction today, but since the Second World War he or she has been eclipsed by nastier, more violent colleagues in the thriller section.

Yet the years following WW1 also saw the flowering of horror and supernatural literature, as well as highly visceral and lurid thrillers by Edgar Wallace, Sapper, Sax Rohmer and many others.  Then came the psychological crime novels of Anthony Berkeley Cox  and others, and the manners novels of the Crime Queens.  The Golden Age doesn't seem to have been all about artificial and superficial village cozies until the time Hitler launched the German attack on Poland.


How many elderly ladies in vicarages solved crime puzzles in the 1930s, anyway? Gladys Mitchell's Mrs. Bradley isn't exactly what I would deem a "cozy" lady. Yes, there was Agatha Christie's Miss Marple in The Murder at the Vicarage (1930), but this was in fact the only Miss Marple novel that appeared prior to the outbreak of WW2 (she also appeared in one collection of short stories).

Would most mystery fans in 1939 even have been able to name Miss Marple (Hercule Poirot, yes)?  It's always seemed odd to me that Miss Marple has come to symbolize the alleged coziness of the Golden Age, when in fact almost all her novels were published after the Golden Age ended.

The same point holds for Patricia Wentworth's Miss Silver, probably the most famous English spinster detective after Miss Marple.  Of the 32 Miss Silver mysteries, only three appeared before 1940.  29 of them appeared on both sides of the Atlantic Ocean between 1940 and 1961, that period when, according to Worsley, Graham Greene and James Bond (one an author, one a series character) made "elderly ladies...seem completely old hat." Apparently more than a few people in the forties and fifties liked old hats.


Speaking of James Bond, let me clarify that although Worsley makes it sound as if James Bond came along in 1939, obviously she doesn't mean that because later in the book she refers to his first appearing in 1952 (except wasn't it 1953?).  But, in any event, to what extent are Graham Greene and Ian Fleming the prime culprits in the alleged killing off of the classical English detective novel?

There are six short chapters by Worlsey in the Golden Age section of her book:

The Women Between the Wars (on the Crime Queens)
The Duchess of Death (on Agatha Christie)
A Life Less Ordinary (on Dorothy L. Sayers)
The Great Game (on the Detection Club)
Snobbery with Violence  and The Dangerous Edge of Things (on the decline of the Golden Age detective novel)

Next post I will be looking in depth at these chapters and how in my view they tend to come up short analytically.
Posted by The Passing Tramp at 4:35 PM