Simon Brett recently restarted his Charles Paris mystery series, after over fifteen years of dormancy. That's quite a lapse of time!  The series already had been slowing down over the course of the 1990s. Between 1975 and 1989 there were thirteen Paris mysteries, but during the 1990s just four.

Finally in 2000 Brett shifted over to the village cozy "Fethering" series (fifteen in fourteen years!).  But in the last two years there have been published two new Charles Paris mysteries, so I thought I would take take a peep at Paris again, first looking at one of the older novels, Situation Tragedy (1981).

I see Simon Brett as bringing up the rear guard of the first generation of post-Golden Age British crime writers (those born roughly from 1910 to 1945, who first started publishing mystery fiction in the period that extended from the waning days of World War 2 up to the mid-1970s).

All these authors grew up when Agatha Christie was very much alive, striding over the world of British mystery like a cozy Colossus (first edition Christie mystery novels were published from 1920 to 1976). Some of these authors, like Julian Symons, very consciously tried to lay out a new course for British mystery, while others, like Patricia Moyes, largely worked within the tradition; still others occupied more of a middle ground.

What Simon Brett helped bring to the genre with the Paris series that was more original was his emphasis on humor and satire.  Though this in itself was not new--there was plenty of humor and satire in Golden Age British mystery and what followed--Brett's Paris novels seem to me to place more emphasis on these qualities relative to actual clueing and detection.  I think readers of Brett's Paris mysteries probably are more interested in what satirical wrinkle he will come up with next, rather than the mystery puzzles per se. 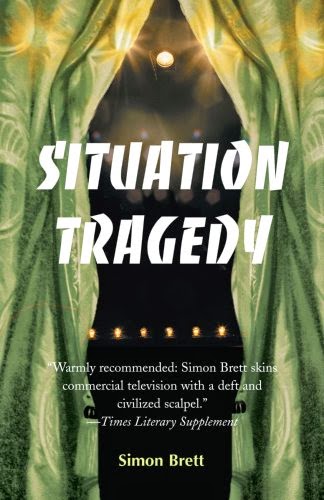 For the Charles Paris mysteries Brett was able to draw effectively on his career in British radio and television, as his protagonist is a small-time actor, as preoccupied with drinking and bedding as he is with detecting.

In Situation Tragedy, the "bit" is that Paris has gotten a part on a British sitcom spin-off series, "The Strutters." Soon people involved with the show are dropping like ninepins, murdered in various memorable ways. It's rather like something out of Seventies Vincent Price horror film.

This allows Brett ample scope for satire aimed at the people in the television business, from the producer (hopeful notes from him are interspersed throughout the text, looking increasingly oblivious as the body count rises), to scriptwriters (there is an almost-too-twee-to-be-believed married scripter couple that Charles rightly finds maddening), to the production crew (i.e., what Brett calls "the men in lumberjack checked shirts whose only function seemed to be to wear lumberjack checked shirts"--labor unions are a great object of satire in this novel).

As far as social detail goes, there is quite a bit of interest in this novel. It shows its age a bit when Brett refers to a character visiting a "home for spastics"; and there is a quite positively portrayed, though stereotypically flamboyant, gay character ("his every movement had the desired effect of advertising his proud overt gayness"). "Like many others in television," Brett observes of another character, "he had been recently divorced"; and when I read this, I wondered how many today would ever have been married in the first place.

Charles' detection is fitful, but there is an interesting plot at the heart of the book that eventually implicates a long-forgotten detective novel series from the 1930s.  Reference is made to Freeman Wills Crofts and E. R. Punshon--how often do you ever see that in a modern British mystery?

The resolution, implausible but inevitable, has, as the title indicates, the elements of tragedy; yet Brett does not play this note as hard as he might have. With the last page the the mask of comedy again looks back at us.

Incidentally, Brett's portrayal of avid detective fiction collectors is not a pretty one.  But then it is hard to sympathize with the sort of collector who doesn't have any interest in actually reading the stuff!
Posted by The Passing Tramp at 4:30 PM