Irish crime writer Nigel Fitzgerald (1906-1981) was born at Charleville, County Cork and read for the bar at Trinity College, Dublin, but left school to become a stage actor.  During the Second World War he served in the British army as an artillery officer in Africa and Italy. He published his first novel in 1953, a mystery, when he was 47.

In total Fitzgerald authored a dozen crime novels between 1953 and 1967 (11 of them between 1953 and 1963), a number of them true detective stories, like 1958's Suffer a Witch, which Jacques Barzun and Wendell Hertig Taylor selected as one of their 100 Classics of Crime Fiction.

Suffer a Witch is set, like most of Fitzgerald's tales, in Ireland, this time in the western town of Dun Moher, where witchcraft rumors run rife. Could there be an actual witch cult in Dun Moher?

Margaret Murray's The Witch Cult in Western Europe (1921), seems, along with various works by Montague Summers, like The History of Witchcraft and Demonology (1926), to have sparked an interest in witchcraft among Golden Age mystery and thriller writers, which we see in novels like Francis Beedings' The House of Dr. Edwardes (1927), John Buchan's Witch Wood (1927) and Miles Burton's The Secret of High Eldersham (1930). Probably the greatest Golden Age mystery in this tradition (certainly that I have read) is John Dickson Carr's The Burning Court (1937). And of course the writer Dennis Wheatley made an entire writing career out of this stuff! 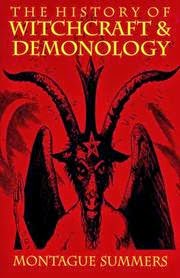 Murray's and Summers' depictions of a widespread European witch cult was debunked by academic scholars over the years, but they kept a firm hold for a long time on the popular imagination, particularly Summers' lurid depictions of bloodthirsty Satanists.

Nigel Fitzgerald's Suffer a Witch is a later manifestation of the classic Golden Age detective novel that makes effective use of the literary devices witchcraft and Satanism. The title of the novel of course is drawn from the Exodus line "Thou shalt not suffer a witch to live."

For modern authority Fitzgerald even quotes Robert Fabian, a Scotland Yard superintendent who authored a number of popular true crime books after his retirement and had a 1950s BBC television series, Fabian of the Yard, based on his memoirs, declaring that "The practice of diabolical sacrilegious rites in the heart of London is undoubtedly on the increase." Fabian himself had investigated a supposed "witchcraft murder" in England in 1945.

I think this belief in witch cults has led to outrageous cases of public hysteria and abuses of justice, like the West Memphis Three case, though, to be sure, it can make for good crime fiction, like in Suffer a Witch.  In this novel Fitzgerald depicts a mystery surrounding the murder of a fifteen-year-old girl who believed herself to be a witch. Somehow she vanished from the Dun Moher post office (see map), only to be later found, naked and strangled, in a country house associated with a history of witchcraft.

The vanishing is a genuine Carrian/Queenian miracle problem, well-presented, and there is impressive ratiocination concerning the identity of the murderer by Fitzgerald's series police detective, Superintendent Duffy. Local color is excellent and there are some fine eccentric Irish characters and even a love story.

Suffer a Witch seems something of a transition between the more anodyne detective fiction associated with the Golden Age and the more gloomy (i.e., realistic) stuff of PD James, etc., in modern times. Much of the novel feels light, yet the cruel murder of a disturbed adolescent girl, quite a sympathetically presented character really, should give the reader a genuine pang of distress, and the author does not balk this. Perhaps the balance of elements is uneasy at times, yet there is much in this novel that is really excellent.

Traditionalists will be pleased to find not only a map but a timetable provided.  And they are actually relevant!  How often does one see that in 1950s mystery fiction?
Posted by The Passing Tramp at 8:34 AM