My mother's biopsy was Wednesday and it's possible we may hear results today so I am praying for the best possible result and would love you to do so too.  I thank all the very kind people who commented on my last post and in fact a comment from Kathy Whalen inspired me to post a "shop" post.  I know there are people out here with grave difficulties in life to be dealing with who enjoy this blog and I don't want to let anyone down despite my being so upset about my own family situation.  So I thought I would try a short post.

In fact I was expecting this month to do a lot of of discussion and interviews for the Murder in the Closet essay collection to which so many fine people have contributed.  I will have to see if I can mentally get that all put together.  But for now I thought I would talk about Elizabeth Gill (1902-1934), another forgotten woman mystery writer from the Golden Age of detective fiction who is being reprinted by Dean Street Press.

I wrote a general intro and sub-intros for Gill's three detective novels, The Crime Coast (1929), (1932) and What Dread Hand? and Crime De Luxe (1933), all of which tell of the sleuthing exploits of Benvenuto Brown, French Riviera artist and amateur sleuth.

You will notice that Gill died when she was only 32.  Had she lived longer I feel confident she would have emerged as one the more notable British women crime writers from the Thirties.

Gill was born Elizabeth Joyce Copping in Sevenokas, Kent 1901 prominent illustrator Harold Copping and second wife, Edith Louisa Mothersill.  Her father was best-known for his Biblical illustrations, especially "The Hope of the World," a depiction of a beatific Jesus Christ surrounded by a multi-racial group of children from different continents that became an iconic image in British Sunday Schools, and the pieces collected in what became known as The Copping Bible, a bestseller in Britain.

Young Miss Copping married for the first time, when she was only nineteen, Kenneth De Burgh Codrington, a brilliant young colonial Englishman then studying Indian archaeology at Oxford.

Codrington, a correspondent with T. S. Eliot on matters of religious philosophy, would become one of England's premier authorities on Indian antiquities.  However, his marriage with Elizabeth lasted less than six years.

Her second husband, whom she married in 1927, was a talented English painter, Colin Unwin Gill, one of the notable names in English art to arise out of the Great War.

(See below for two of his paintings, Heavy Artillery, 1919, and King Alfred's Longships Defeat the Danes, 1927.)

The new couple occupied a ground floor studio flat at the Tower House at Tite Street, Chelsea, an abode of artists and writers for decades.

(Indeed, in a coincidental pairing of artist ancestors and detective writer descendants the Gills occupied the very same flat the famed artist James Whistler, great-uncle of mystery writer Molly Thynne, had before them.)

Two years after the marriage, Elizabeth Gill, who also dabbled in watercolors (a great-grandfather was a prominent watercolorist) and dress design, published her first detective novel, Strange Holiday (The Crime Coast in the US, the title under which Dean Street Press is reprinting it.) Three years later came What Dread Hand?
Both novels concern murder in England, though investigation takes the characters to southern France, a region with which Gill obviously was quite familiar, and the home of her amateur sleuth, the brilliant artist Benvenuto Brown.  Crime Coast deals with artists, while Dread Hand expands the canvas to include stage personalities.

The third Gill detective novel, Crime De Luxe, takes place on a luxury transatlantic ocean liner traveling from the UK to the US, where Brown is giving an exhibition of his works.  This clever and thoughtfully-written novel actually is one of my favorite shipboard mysteries.  The author traveled several times to the US with her husband and seems to have had a high opinion of the country.

Literate, witty, well-plotted and altogether charming, Elzabeth Gill's trio of detective novels were reprinted in the US, where they were very well-reviewed and her untimely death was reported nationally; yet after her death the books remained out-of-print for over eight decades.

Happily, that has now changed, with their reprinting by Dean Street Press.  I hope you give them a look and enjoy them. 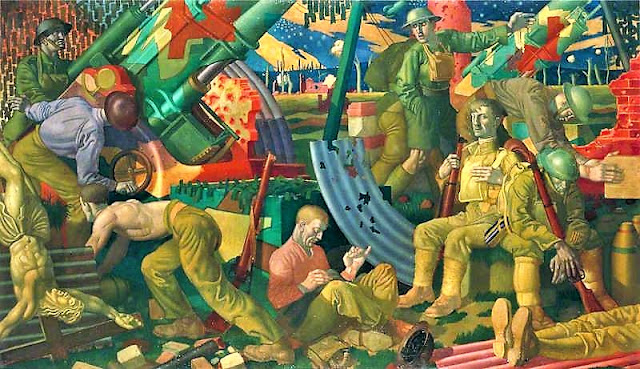 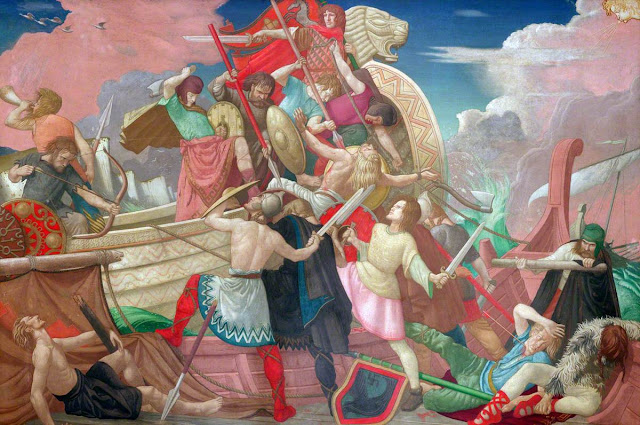 Posted by The Passing Tramp at 2:46 AM