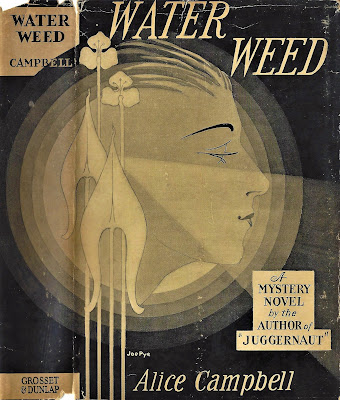 Anglo-American author Alice Campbell's mysteries had, in my opinion, some of the best jacket art from the Golden Age.  Unfortunately I have very little of it, but it is accessible in facsimile editions, plus Dean Street Press in its new editions is using some of the original art.

Here are American editions of two of Campbell's first three novels, Juggernaut, Water Weed and Murder in Paris (Spiderweb in UK), all of which have very attractive designs.  (I could not fit Murder in Paris in here, but it's coming later.)

The Water Weed jacket, one of my all time favorites, is credited to "Joe Pye," an obscure figure (to me, anyway) who also drew the cover of Clifford Orr's very popular The Dartmouth Murders from the same year.  That book, by the way, was reprinted a few years ago by Coachwhip, with an introduction by me.

With Water Weed I love the way water is suggested by the circles emanating from the woman's hair, it's like a whirlpool.  Lovely stuff, but sinister too!  Water weed does not let go. 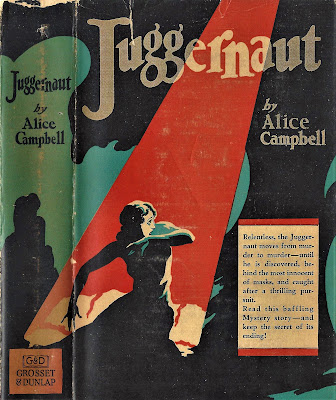 The Dartmouth Murders actually is advertised in the back pages of Water Weed, so Farrar & Rinehart must have commissioned "Joe Pye" originally to do the covers to both of the books.  The name is associated with the plant Joe Pye weed, which supposedly got its name from a Native American herbalist from long ago.  Which makes me wonder if "Joe Pye" the putative dust jacket artist was a really pseudonym, though there actually were people named Pye.

These American jackets all have the attractive deco feel of the period, as do other Alice Campbell jackets in both the US and UK.

My two favorites by the Collins Crime Club probably are The Click of the Gate and Keep Away from Water, pictured with their imperiled heroines in facsimile editions below. 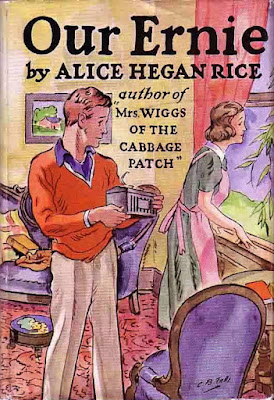 Alice Campbell's No Light Came On was published in England in 1942 with a drab, plain Collins jacket, but appeared in the US, after a three year lag for some reason, with Scribner's.  The art is signed by "Falls," who I assume is C. B. Falls, or Charles Buckles Falls (1874-1960), an accomplished American illustrator.

I don't know of his doing any other mystery cover art, although he did do 1939's Our Ernie, a humorous novel by American author Alice Hegan Rice (of Mrs. Wiggs and the Cabbage Patch fame) that, however improbably, has an espionage subplot.  You can see the resemblance between the styles of Our Ernie and No Came Light On, I think.

The appropriately colorful The Corpse Had Green Hair (1950), Alice Campbell's last book, was published in the UK only, by Campbell's longtime British publisher Collins.

I cannot read who the artist was, my copy being very worn, but it's a nice jacket and a nice sendoff for the author.  Alice Campbell, who had blonde hair, died five years later, two days short of her sixty-eight birthday, her blonde hair now now white. 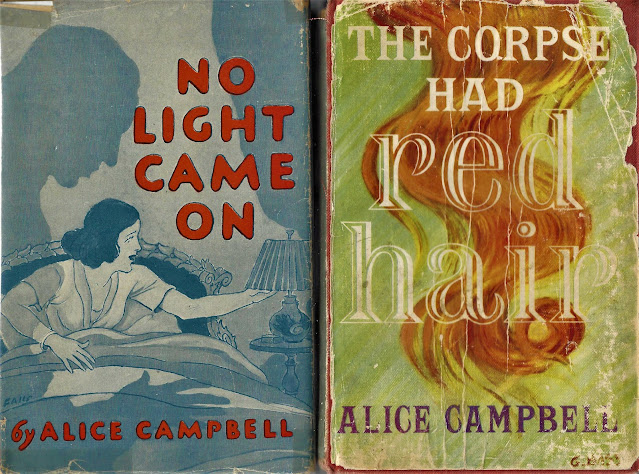 Posted by The Passing Tramp at 3:04 PM