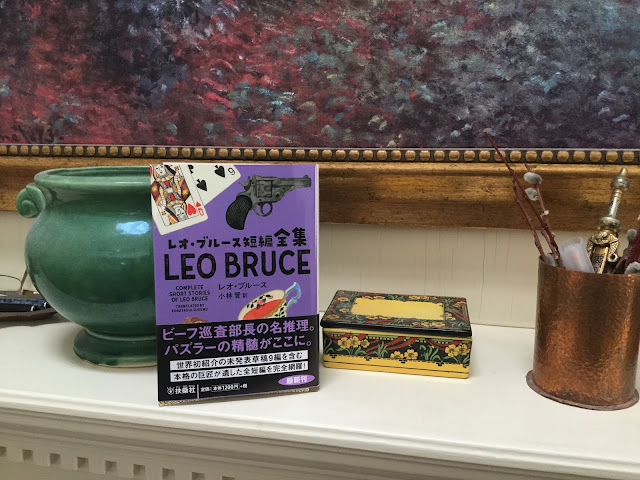 This attractive volume, The Complete Short Stories of Leo Bruce, published in Japan recently, was the brainchild of my friend Susumu Kobayashi, who asked me to write an introduction to it after I discovered additional Leo Bruce short crime stories, during the course of my researches a little over a decade ago.  Twenty-eight Leo Bruce short crime stories were collected by Barry Pike in Murder in Miniature: The Short Stories of Leo Bruce, published three decades ago by Academy Chicago back in 1992, but the eleven additional short stories which I found raises the number of known Bruce short fiction opuses by close to a-third, to thirty-nine.  Fourteen of them feature Bruce's first series sleuth Sergeant Beef, a comical, homespun British copper who nevertheless proves a most perspicacious crime investigator.

So far an English language version of the Japanese volume has not come into being, but in the meantime, English readers may enjoy getting to read my introduction to the Japanese volume.  Leo Bruce, for those of you who do not know, was the mystery writing pen name adopted by the fine English writer and memoirist Rupert-Croft-Cooke (1903-1979), best known today for his detective fiction.

One bit of news in this introduction is that Bruce contemplated bringing back his retired sleuth Sergeant Beef, shelved in 1952, as late as 1966.  Sadly, his publisher gave him what can only be termed a polite brush-off, regretfully stating that Sixties readers would find Sergeant Beef a "complete anachronism."  Happily retro murders are all the rage today.

Introduction to The Complete Stories of Leo Bruce

As a writer British novelist and memoirist Rupert Croft-Cooke (1903-1979) is best known today for the fine detective fiction that he published between 1936 and 1974 under the pseudonym Leo Bruce. Under this pen name there appeared thirty-one detective novels, eight of them featuring Sergeant Beef, an inelegant but perspicacious village policeman who becomes a London private investigator, and twenty-three featuring Carolus Deene, an independently wealthy schoolmaster and keen amateur sleuth.  The Beef novels appeared between 1936 and 1952 and the Deene novels between 1955 and 1974.  Why no Beef novels appeared after 1952 is not known but arguably this lapse resulted from the fact that in 1953 Rupert Croft-Cooke and his secretary and companion Joseph Susei Mari were scandalously arrested, tried, convicted and sentenced to prison terms for acts of “gross indecency” allegedly committed upon two navy seamen.  After their release from prison Croft-Cooke and Joseph left England for the city of Tangier, Morocco, where they resided for the next fourteen years.  Safely ensconced there, Croft-Cooke in 1954 wrote The Verdict of You All, a damning indictment of his unjust arrest and imprisonment, and At Death’s Door, his first Carolus Deene mystery, in which one of the murder victims is a British policeman.  It seems fair to conclude that after his shameful mistreatment by British legal authorities Croft-Cooke no longer relished having a cop headline his detective novels as series sleuth.

The taste of Beef lingered, however, in Croft-Cooke’s short detective fiction.  The author early on established himself as an able practitioner of fiction’s shorter forms, under his own name in 1926 publishing a sinister short story titled Banquo’s Chair, which later served as the basis for a famous episode of the American television program Alfred Hitchcock Presents.  Beginning in 1950 with “Clue in the Mustard,” “Leo Bruce” began publishing mystery short stories, primarily in the newspaper The Evening Standard, but also in the magazines The Sketch, where the author was concurrently employed as a book reviewer, and Tatler and Bystander.  The bulk of these stories, fourteen of which featured the redoubtable Sergeant Beef, appeared between 1950 and 1953, before Croft-Cooke’s legal troubles commenced, although there were as well a few stragglers, including a major Sergeant Beef tale, “Beef for Christmas,” which popped up later in the decade.  In 1991 twenty-eight Leo Bruce short stories—ten of them with Sergeant Beef and eight of them with a comparatively featureless substitute police sleuth, Sergeant Grebe (a grebe is an aquatic diving bird)--were collected by mystery scholar Barry Pike and published in the United States under the title Murder in Miniature: The Short Stories of Leo Bruce.  It was believed at the time that this was a complete collection of the Leo Bruce short fiction, but this belief proved mistaken.

Two decades later, when I was doing research at the Harry Ransom center at the University of Texas at Austin in 2011, I discovered, to my surprise and pleasure, a cache of eleven forgotten (or never known) Leo Bruce short stories, ten of them in Joseph Susei Mari’s original typescript.  Two of these stories, “Beef for Christmas” and “The Inverness Cape,” both of which featured Sergeant Beef, had been previously published, the former in Tatler and Bystander in November 1957 and the latter in The Sketch in July 1952.   The other nine stories, however, appeared never actually to have been published.  In February 2013 I wrote about this exciting discovery in “The Lost Short Stories of Leo Bruce,” an article at my blog, The Passing Tramp; and since then “Beef for Christmas” and “The Inverness Cape” have been reprinted, the former in Silent Nights: Christmas Mysteries, edited by Martin Edwards, and the latter in Bodies in the Library I, edited by Tony Medawar.  Now these two tales and the nine additional ones which I discovered are appearing for the first time in one volume, The Complete Short Stories of Leo Bruce, along with the original twenty-eight stories from Murder in Miniature, making a full plate indeed (a red plate special, if you will): thirty nine stories, fourteen of them with helpings of Beef and eleven with portions of Grebe—a true feast for carnivorous fans of vintage detective fiction!

The added Beef stories are the aforementioned “Beef for Christmas” and “The Inverness Cape,” as well as “Rigor Mortis” and “Spontaneous Murder.”  At some 4500 words, “Beef for Christmas” is the most substantial of all the Sergeant Beef short stories.  It is a highly traditional tale of murder at a millionaire’s mansion taking place during a Christmas house party and the investigation into the dastardly holiday slaying which Beef conducts is chronicled by Lionel Townshend, Beef’s snooty “Watson” from the eight novels.  Both “Rigor Mortis” and “Spontaneous Murder” are clever tales in which Beef finds solutions to murder problems brought to him by “young Thackeray,” a former constable of his who is now a Scotland Yard detective.  “Rigor Mortis” concerns the murder of a prosperous “village Lear” with three sets of daughters and sons-in-law and a niece-housekeeper.  When his battered body is discovered under a heap of coke in a boiler room, the question of whodunit tests even Beef’s acumen, not to mention the reader’s.  In “Spontaneous Murder” Mabel Gimmetts’ dead body is found in some woods, half covered in leaves.  She has been brutally beaten to death, but was she really the victim of a purse snatching gone too far, as Thackeray thinks, or was there some other motive behind her murder?  (For some reason Croft-Cooke later recast this tale as a Sergeant Grebe story, “A Case for the Files,” which was included as part of the set of Leo Bruce stories collected in Murder in Miniature.)  In the last added Beef story in this collection, “The Inverness Cape,” ne’er-do-well Richard Luckery seems the all too obvious culprit in the violent murder of his wealthy aunt, but Sergeant Beef, who relates this challenging case retrospectively, finds that the matter prove rather more fiendishly complicated than that.  “My wife said that case would be the death of me,” he recalls.

The added Sergeant Grebe stories are “A Smell of Gas,” “Behind Bars” and “The Devil We Know.”  To me this trio of clever tales is reminiscent of Freeman Wills Crofts’ Inspector French short stories, in that they turn on small points of error made by the murderer and spotted by gimlet-eyed Grebe.  In “A Smell of Gas,” which is retrospectively related by Grebe, “sour disgruntled” Nora Godalming seemingly committed suicide at her and her frequently absent husband Archie’s “gloomy little bungalow” by putting her head in the oven and turning on the gas, but oddly she left behind no note to explain her fatal action.  Could Archie have had a hand in her death?  Or widowed local farmer John Buck, with whom Nora appears to have been rather more than friends?  “Behind Bars” takes us to a favorite haunt of Rupert Croft-Cooke: the circus.  Here Grebe investigates the death of a certain George Bush (!), lowly assistant to Baron Lukas, the noted Balkan animal trainer.  Bush’s dead body was recovered from the locked lions’ cage, but, as Sergeant Grebe puts it, there is “[n]ot a scratch on him.”  In “The Devil We Know,” Connie Edgett has been receiving anonymous phone calls from a man advising her to prepare herself for her imminent death.  When she is indeed found dead, viciously strangled in her bed, does it mean that this devilish telephonic unknown got to her—or is there some other explanation for her murder?  Sergeant Grebe knows the answer!

Three of the four remaining added stories—“Name of Beelzebub,” “From Natural Causes,” “Murder Story”--have no sleuths and indeed are not proper detective stories at all.  All are tales of irony, the first concerning the fate of an amateur village card-reader who finds to his fright that in telling his own fortune he keeps drawing the death card, the second concerning a World War Two veteran and petty criminal who reflects on how he once killed a man; and the third concerning an aspiring writer looking for good material who at a bar happens upon a bibulous woman with a story to tell about a murder, if he can only get her to focus on it.  Finally, there is a coda in “The Door in the Library,” a teasing piece of flash fiction which tells how a determinedly inquisitive lady mystery writer, Alicia Glynn-Tasker, “a thin-faced woman with rimless spectacles,” solves the locked room death of the previous Lord Flitton while viewing the late aristocrat’s country home in a tour party led by the current Lord Flitton.  Seemingly neither Sergeant Beef nor Carolus Deene was needed this time.  Or were they?

Despite his longstanding animus against the British police for their beastly treatment of him in 1953-54, Rupert Croft-Cooke actually contemplated bringing Sergeant Beef back on two occasions, once in 1958 and eight years later in 1966, at the height of Swinging Sixties.  In his short story “Beef for Christmas” Croft-Cooke obviously had the basis of a new Beef novel, but instead he elected to employ some of the ideas from the story in a new Carolus Deene mystery, A Louse for the Hangman (1958).  Eight years later he wrote his editor at his English publisher W. H. Allen & Company, querying whether Allen might be interested in revamping the Sergeant Beef series, allowing him to put Carolus Deene in mothballs for a bit.  With the letter Croft-Cooke sent Allen a copy of his first Sergeant Beef novel, the satirical tour-de-force Case for Three Detectives (1936), in which Croft-Cooke not only constructed an outstandingly ingenious murder mystery but successfully parodied famed fictional sleuths Father Brown, Hercule Poirot and Lord Peter Wimsey.  His editor at Allen praised Case for Three Detectives, which had been out-of-print for three decades, as “marvelously ingenious,” but countered that

….as far as the good Beef is concerned, frankly I think he is too comic a character for the second half of the sixties.  Your characters considered him strange in 1936, and it might be that readers would consider him a complete anachronism in 1966.

On the whole, therefore, I recommend that you continue with Carolus Deene—but I would not have missed [Case for Three Detectives] for anything, and I am most grateful to you for having drawn it to my attention.  In view of the fact that it is probably one of your few remaining copies, I am returning it to you under separate cover.