The Adventures of Rufus King: The Making of a Major Vintage Mystery Writer

What to do after college is a perennial question for graduates.  Some gets jobs.  Some go to grad school.  Some take a gap year.

Future mystery writer Rufus Franklin King, the only child of successful New York doctor Thomas Armstrong King, was supposed to enroll in law school in the fall at Columbia University when he graduated from Yale in 1914 at the age of 21, but things didn't work out that way.

When Rufus balked at the prospect of "taking silk," speaking loosely, his father "put him to work in a silk mill" (Rufus' words) at Paterson, New Jersey.  (Dad had his hand on the purse string, don't you know.)  This was just a year after the famous general strike at Paterson in 1913, which was a great progressive celebrity cause of its day.

Rufus stuck it out in the grim wilds of New Jersey, 20 miles from his native Manhattan, for just two years, until 1916, when he joined Squadron A Calvary, a unit of the New York State National Guard composed of "many of the foremost young society men of New York," to serve adventurously in the Mexican expedition against the forces of Mexican revolutionary leader Francisco "Pancho" Villa.

When, with American entry into the Great War in 1917, Squadron A was reorganized the following year as the 105th Field Artillery, King served overseas in Europe in Battery A from June 5, 1918 through March 13, 1919.

During this time King performed with great valor and was awarded the Silver Star Medal for his heroism during the Meuse-Argonne Offensive, which was conducted over seven weeks in the fall, culminating in the German armistice on November 11, 1918, after over 26,000 Americans had been killed, along with a like number of Germans.  It remains the deadliest battle in US Army history.

At the large wood known as the Bois de Sachet, Lieutenant King stepped into the breach with his pair of guns after the wounding of his Captain, "displaying great initiative, energy and unusual military ability."  As Rufus later put it in a publicity blurb, he "was cited for holding the front line in the Bois de Sachet with two French .75s."

After leaving the US Army in 1919, Rufus bloody well wasn't going back to a prosaic life in Paterson, New Jersey.

Instead of going back to the silk mills, he became the senior wireless operator aboard the steamship Annetta, which was leased to a fruit company, and spent much of his time in Latin American ports, enjoying many adventures.

Off Pernambuco, Brazil he "salvaged a ship...and hauled it into port" and "he beachcombed along the waterfront of Buenos Aires."  An attractive and charismatic blond American still in his twenties, "Rufe" doubtlessly collected some fetching objects on his waterfront wanderings.

It was in Panama that Rufus completed a manly adventure story and sent it on to the pulp magazine Argosy.  On his next return to Panama, so the story goes, he found an acceptance letter from the magazine along with a check; and he thereupon resolved to return to the US and make his living from fiction writing.  (Of course being the only child of a wealthy doctor didn't hurt, but the publicity material never mentioned that little detail.)

Presumably this career-altering tale was the serial "Dirty Weather," which appeared in Argosy in three parts in October 1922.  Still, on returning to the US he worked for a time in the maritime division of the New York City police (boats again), so he hadn't exactly bet the farm, so to speak, on writing.

"Dirty Weather" was followed in Argosy by the serials "Dirty Work" in May 1924, "Tuned Out" in September 1924 and "North Star" in February 1925.  "Tuned Out" was later repackaged as a mystery (which is isn't) and published as The Fatal Kiss Mystery in 1928, as a follow-up to Rufus' first mystery novel, a very Roaring twenties affair entitled Murder De Luxe (1927).

"North Star," a "dog tale" about a heroic German shepherd who rescues his dumb master from disaster, became Rufus' first published novel in 1925.  It was a substantial success and was adapted as a fifty minute silent film, released on Christmas Day of the same year and starring Strongheart, a doggy rival to Rin Tin Tin, and, in a sixth-billed part, a 24-year-old Clark Gable.

Rufus is said to have based his canine hero on his own German shepherd police dog.  I wish I had a picture of them!

The next year Rufus published another dog novel, Whelps of the Wind (this time the dog democratically is a "mongrel," as they used to say, i.e., a pooch made of mixed breeds).  This book was well-received too, although no film was made from it.  Perhaps Strongheart held out for more dough--dog biscuit dough, that is. 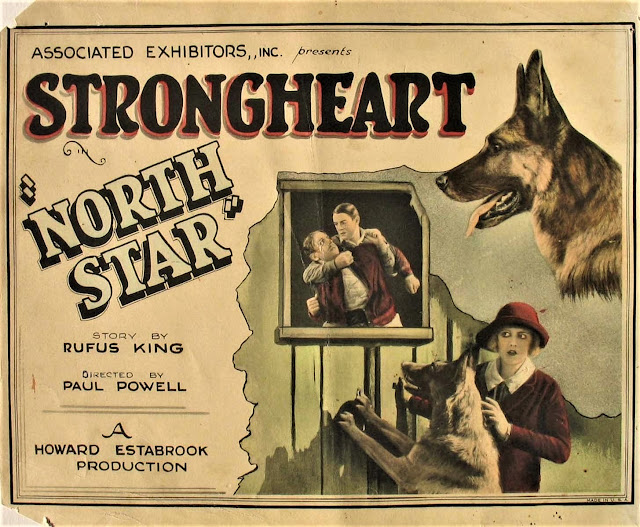 The first actual film based on a Rufus King story was an espionage film set in the Panama Canal, called The Silent Command.  The film, which starred none other than Hungarian actor Bela Lugosi in his first American film role (the lead villain, natch), opened in August 1923 and was quite well-received.  Was this one of the early Argosy serials originally?

It was not until 1927 Rufus published his first actual crime novel, the aforementioned Murder De Luxe, having torn up his third dog novel after reading Gladys Bronwyn Stern's novel The Dark Gentleman, which the deemed the last word in dog tales.  He followed Murder De Luxe in 1928 with The Fatal Kiss Mystery, which was really a Wellsian light sci-fi story masquerading as crime fiction.

Finally in 1929, a year after the death of his father from pneumonia at the age of 62, Rufus, whom the will of his father had hedged in with a trust fund and trustee, published his first Lieutenant Valcour detective novel, Murder by the Clock.  It was a huge success and set his career firmly on the course of mystery fiction.  The leap in sophistication from his previous books is indeed remarkable.

What critics liked so much about Murder by the Clock was not its puzzle plot per se but the characters with which Rufus peopled it.  Unbeknownst to critics, they had discovered a crime novel, a serious story about people impacted by a crime.  In my view Murder by the Clock stands as one of the great American mystery debuts of that year, alongside Dashiell Hammett's Red Harvest and Ellery Queen's The Roman Hat Mystery, and is something of a compromise between them. 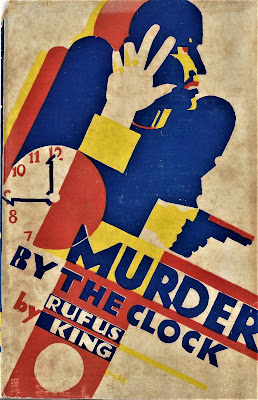 It's too bad Rufus King was one of the mystery writers whom Julian Symons reread, when writing the first edition of Bloody Murder in the early Seventies, and damningly deemed to be not "anything like as good as I remembered" from adolescent days. In truth it's exactly the sort of thing that Symons should have liked: a dark story of warped personalities, morbid psychology and aggressively presented sexuality, with the rapid narrative pace of Red Harvest, one of Symons' favorite crime novels (and rightly so).

This was the first Rufus King novel which I ever read, about twenty years ago, and I'll admit at the time I didn't like it, being in my full "Humdrum" phase in those days.  It seemed too thinly plotted to me.

On recently reading the novel, however, I thought it simply superb.  John Norris at Pretty Sinister Blog reviewed it over a decade ago, back in January 2012, which seems like practically ancient history now.  My first Rufus King rave, of Rufe's third Valcour crime novel Murder by Latitude, came later that year, and Mike Grost at his mystery fiction website also posted a good deal about Rufus King around that time.  I think all that led to Rufus getting republished in 2014, although unfortunately I was never involved with that particular publisher.

I quote the conclusion of John's review below, because he really nails it to the masthead, as it were:

Murder by the Clock is unlike any other American mystery I have read from this era.  Ture, there is detection and the policeman hero is doggedly determined to being in the villain of the piece, but the emphasis here seems to be less on the mechanics of the criminal investigation and more on the after effects of the crime as it alters the lives of the Endicott household.  In this respect King's novel is far more modern than one would expect from his era.  He may have been one of the earliest writers to explore the real drama inherent in crime and its aftermath rather than exploiting a fictional murder as a mere puzzle entertainment.

There's a great deal of truth here, a'though I always recoil from the term "mere puzzle/s."  Indeed, that's one of the chapter titles, ironically used, in my books Masters of the Humdrum Mystery, a defense of the classic, puzzle-oriented mystery, which was published in 2012 as well.

I love me a murder puzzle with meticulously detailed detection and I truly believe a good puzzle is never "mere," but there's something truly thrilling with Murder by the Clock in seeing such a mature embodiment of the crime novel way back in 1929, one that doesn't have to resort to thuggish brutal violence like Red Harvest (good as it is) to score its points about human nature.  Rufus King is writing about a much more sophisticated New York milieu than Hammett's Wild West extravaganza, but his perception of the horrid darkness often found at the core of the human heart is just as acute as Hammett's.

Rufus King reminds me a great deal of another handsome and sophisticated gay vintage mystery writer, one who will be very familiar to readers of this blog: Hugh Callingham Wheeler (1912-1987), who over three decades wrote crime fiction, both with his partner Richard Wilson Webb and, after the two men broke up, solo.

Although he was a full generation removed from Rufus, Hugh Wheeler and Rufe are rather similar writers.  Both men were precocious college students possessed of copious amounts of personal charisma, both were extensive travelers and lovers of the life aquatic, and both took writing seriously as an art form and were desirous in their mystery fiction of doing something more than mystifying their readers.  Both men had multiple films adapted from their works too.

Hugh Wheeler ultimately abandoned crime writing for theater and film writing, publishing his last crime novel in 1965, although Seventies works like the stage musical Sweeney Todd and the black comedy film Something for Everyone certainly have criminality in them.  Rufus King first abandoned his series sleuth Lieutenant Valcour after eleven books in 1939 and then left long form crime writing altogether in 1951, although he continued publishing short crime stories, primarily in Ellery Queen's Mystery Magazine, throughout the Fifties and Sixties, up to his death in 1966.  But they both left sizeable and important mid-century crime fiction legacies and there's no doubt in my mind that they were two of the genre's most significant and distinctive authors.

Posted by The Passing Tramp at 8:22 PM