Making a Killing: A Review of Agatha Christie: Murder in the Making, by John Curran 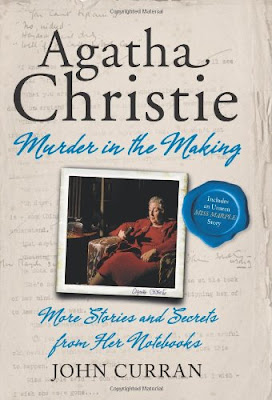 In this second volume of extracts from Agatha Christie's notebooks and personal papers, author John Curran offers further illumination into the working life of Agatha Christie and how Christie became the world's most successful mystery writer.  In contrast with his first such foray, Agatha Christie's Secret Notebooks, Curran this time adopts a chronological approach to his material, which I think works quite well.  Christie fans and fans of Golden Age mystery more generally will surely not want to miss this fascinating volume.

Curran structures Murder in the Making by decade (1920s-1970s), so that we read about The Secret of Chimneys, say, on pages 95-109 and Passenger to Frankfurt on pages 375-382.  This is a more cohesive and coherent approach then was used in the first book, in my view, and it enhances the newer book significantly.

Additionally, there are interesting scraps tossed in the pot here and there: a trial section deleted from Christie's first detective novel, The Mysterious Affair at Styles; Christie's manuscript version of her article "How I Created Hercule Poirot"; a different--and superior--version of a Miss Marple short story; Christie's copious references to poisons in her notebooks; Christie's booklists and unused ideas (did you know she considered writing a detective novel based on the famous mystery game Cluedo/Clue--I didn't!).


Curran's opening chapter, however, is an assessment of how much Christie adhered to the detective fiction tropes established by Edgar Allan Poe and the rules for writing detective fiction promulgated by Ronald Knox and S. S. Van Dine.  Curran supports the view that Christie "mischievously"  and "gleefully" and "joyously" tweaked, bent, "broke" and "shattered" the rules set down by Van Dine and Knox.


This makes for interesting reading (and Curran obviously knows the Christie books like the back of his hand--better than the back of his hand probably!), though I think Van Dine's and Knox's rules can be overemphasized.  There was no requirement that, like Jews and Christians with the Ten Commandments, Golden Age mystery novelists devoutly follow the "Rules" in detail (as Curran notes, Van Dine's injunctions are especially fussy and fiddly).  Even "Humdrum" detective fiction writers like Freeman Wills Crofts and John Street broke the rules on occasion (one of Street's books even anticipates by a quarter century a rules-bending trick used by Christie).  Heck, even Van Dine broke his own rules!

I tend to agree with Alfred Walter Stewart, who wrote Golden Age mysteries under the pen name J. J. Connington, that there was "only one reasonable convention" in detective fiction, that of the very basic principle of fair play: "The reader should always know exactly as much as the detective is supposed to know, and certainly not less than this."


I believe Christie adhered to the fair play convention (though she certainly pushed boundaries). Whatever critics like Van Dine and Raymond Chandler may have said, there is nothing unfair about the solutions of The Murder of Roger Ackroyd and Murder on the Orient Express.

"Only a halfwit could guess it," complained Chandler of the solution to Orient Express.  Guess who didn't guess it.

I have this feeling that certain very intelligent people (like, oh, S. S. Van Dine and Raymond Chandler) did not like being fooled by this unprepossessing, everyday English gentlewoman named Agatha Christie. But fooled they were--and fairly fooled too.


I think the majority of Golden Age critics and readers were with me on this one.  Curran is too knowledgeable to repeat the popular canard that Christie was threatened with expulsion from the Detection Club over her solution to Roger Ackroyd (the Club did not exist when Roger Ackroyd was published), but he does write that the "civilised outrage that followed the publication of The Murder of Roger Ackroyd in 1926 showed what a serious breach of the rules its solution was considered at the time."  I would like to see some evidence of the extent of this "outrage."  I have seen contemporary reviews praising the book in glowing terms.

This carping of mine aside, Murder in the Making is filled with notable insights, a good many of which I will list:

Curran points out that despite the fact that country house and village whodunits "have become synonymous with the name of Agatha Christie," in fact only a minority of her books--about one-third--actually take place in such settings.

We learn from Curran that Christie adapted her perennially popular mystery thriller The Secret of Chimneys into a play.  Curran deems both novel and play entertaining but "littered with loose ends, unlikely motivations and unconvincing characters" (though clearly a huge fan of Christie, Curran does not hold back from occasional negative criticism).  He is right when he asserts that the thrillers The Man in the Brown Suit and The Seven Dials Mystery "are, if not more credible, at least far less incredible" than Chimneys (and I think as a result they are superior).

Curran is right to stress the great popular appeal of Christie's miraculous combination of ingenuity and simplicity (the plot of Lord Edgware Dies is "audaciously simple and simply audacious," he writes). Accomplished detective novelists like R. Austin Freeman and John Street often are ingenious, but their rigorously applied scientific methodology can seem trying and "heavy" to some modern readers, no doubt.  The same is true, one might argue, of many of Dorothy L. Sayers' clever plots.


Curran notes the sophisticated milieus of both Lord Edgware Dies and Three Act Tragedy.  It may surprise condescending Christie critics today, but many critics and fans in the 1930s considered Christie a witty and sophisticated writer, just like Sayers, Margery Allingham and Ngaio Marsh.

Curran discusses the discrepancy between the motives given for the killer in the American and English editions of Three Act Tragedy (something I noted last year in an article), but unfortunately the reason for this discrepancy is one mystery the notebooks do not solve!


Curran notes Christie's deepened interest in character development in many of the 1940s tales, like Sad Cypress, Five Little Pigs and The Hollow, a point that cannot be made often enough as far as I am concerned.  Christie's condescending journalistic critics have missed this point completely, though academics have been aware of it for some time now.  I think you can see this trend beginning in the late 1930s with Death on the Nile, however (it has far more interesting characters than, say, the earlier Murder on the Orient Express).

Curran accurately notes the darkness at the heart of The Body in the Library, a book recently rather mocked by P. D. James for its alleged artificiality and supposed lack of forensic credibility.


Curran provides a brilliant analysis of Hercule Poirot's under-appreciated swan-song, Curtain, the best such I have read.  Curran shows the idea for Curtain percolated several years in Christie's brain before it was written (probably in 1940). Fascinating stuff here!


Curran shows Christie considered including the egregiously jolly Tommy and Tuppence in They Came to Baghdad.  Blessedly, she had second thoughts.  She also thought of including Ariadne Oliver and her brother (?!).  Now this would have been interesting.  Curran notes that Christie took over 100 pages of notes for Baghdad and that the lightweight thriller gave her more trouble with plotting than many of her much more complex whodunits.

Curran praises Cat Among the Pigeons, despite what he terms its "abundance of femininity."  Well, it is set at a girl's school!  Interestingly, there is a Freeman Wills Crofts detective novel, Mystery on Southampton Water, that has not a single female character in it.  Maybe the two books should be read concurrently, as gender antidotes to one another!


Curran contends that Christie "used poison as a murder method more often than any of her contemporaries."  I would like to test this assertion against Christie's contemporary John Street. Though John Street was the Golden Age Master of Murder Means and could design practically any way humanly (or inhumanly) conceivable to kill a person he, like Christie, loved poison and used it a great deal in his books.  He wrote over 140 mysteries.


Curran contends that Christie wrote only two "pure whodunits" in the 1960s: The Mirror Crack'd from Side to Side and A Caribbean Mystery.    He deems her best novels from this period The Pale Horse and Endless Night, a judgment with which many Christie fans (including this one) would agree, I think. Yet I think that he is a tad hard on The Clocks*("an inexplicably disappointing offering" he calls it) and I believe At Bertram's Hotel has its appeal, even if the plot is a bit dodgy.  Curran reveals that as she aged Christie increasingly relied on a Dictaphone, to the detriment of her work (the same thing happened with John Street).

(*note to John on The Clocks--could "Florence Elks" be the American woman mystery writer Craig Rice?)

Curran shows that the notebooks reflect Christie's slackening grip on plotting in the 1960s and 1970s. There is the narrative shakiness of Third Girl, for example, the novel which Curran deems the weakest of Christie's 1960s mysteries.  "This [narrative] uncertainty [in Third Girl] is mirrored in [Christie's] notes," writes Curran.  Similarly, By the Pricking of My Thumbs has notes "more unfocused than usual."  There are good ideas, to be sure, but they are shakily developed.

Curran is equally forthright about the weaknesses of Christie's 1970s books. Nemesis "is more impressive in its emotional power than its plotting....rambling and repetitive"; "there is little in the way of plot at all in Passenger to Frankfurt....the only reason that [it] was even published is that it had the magic name of 'Agatha Christie' on the title page"; "Postern of Fate is the poorest book of [Christie's] career...one which, in retrospect, should never have been published" [very true--and yet it's still in print and is still being read--the name "Agatha Christie" indeed is talismanic!].

Despite the weakness of the 1970s novels and the confusion in the later notebooks, Curran notes that Christie started up with a new plot idea in late 1973, right after the publication of the dreadful Postern of Fate.  He thinks the idea a quite intriguing one that would have marked a "radical departure" for the aged Queen of Crime (it is rather psychological in approach).  But, unfortunately, Christie, who had just over two more years to live and whose health was rapidly declining, was unable to carry her bright idea beyond its initial jottings.

There is additional interesting material in Murder in the Making besides the notebooks and Curran's analysis of them.

From Christie's 1938 essay on Poirot (written in 1937) we learn that Christie, sounding rather like her esteemed sister in crime Dorothy L. Sayers, is taking "more interest in my characters" and seeing "them more as real people and less as pawns in the game."

Especially interesting is the Miss Marple short story "The Case of the Caretaker's Wife," appearing in this version for the very first time in Murder in the Making.  Curran is right that this version of the tale is vastly superior to the earlier published version, "The Case of the Caretaker."  Indeed, it is now one of the best Miss Marple short stories, with a much better-grounded village setting.  Yet the basic problem remains that Christie cannibalized the story for one of her most admired novels, Endless Night. Probably most people still will prefer the novel to the story.

As I come to the close of this long review, I will just express my hope that I conveyed some of the interest Murder in the Making has for the Christie fan.  No true fan of the Queen of Crime would want to miss it.  Moreover, all admirers of Golden Age mystery fiction in general should give it a look as well.
Posted by The Passing Tramp at 3:54 PM