Murder in the Family: The Warrielaw Jewel (1933), by Winifred Peck

In 1933, Catholic priest and writer Ronald Arbuthnott Knox, one of the talented Knox siblings, children of Edmund Arbuthnott Knox, former Anglican Bishop of Manchester, published The Body in the Silo, a detective novel.

This was not really a surprise. Father Knox, best known in the mystery genre today for having formulated an influential set of “rules” for the writing of detective fiction, had before 1933 already published three well-received detective novels and been enrolled as a founding member of England's Detection Club in 1930.  There was a five year lag between The Footsteps at the Lock (1928) and The Body in the Silo (1933), to be sure, yet the appearance of the latter could not exactly be called unexpected.

However, another Knox sibling also published a detective novel in 1933: one of Ronald Knox’s sisters, Lady Winifred Knox Peck (1882-1962). Entitled The Warrielaw Jewel, this mystery tale by Peck, a once successful though today mostly forgotten mainstream novelist, received extremely favorable reviews and holds up well today. Like her brothers, Peck clearly had a first-class mind, reading Modern History at Oxford before her marriage to James Peck, a prominent figure in Scottish education.


The Warrielaw Jewel deserves reprinting as well.  Jewel is notable as an early example of a Golden Age mystery that, in its shifting of emphasis from pure puzzle to the study of character and setting, helped mark that gradual transition from detective story to crime novel which Julian Symons celebrated in his influential history of the mystery genre, Bloody Murder. 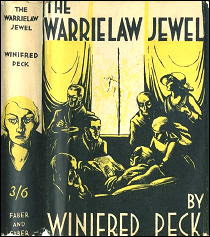 A tale of deep Victorian/Edwardian familial dysfunction, Jewel rather resembles such Golden Age mysteries as Margery Allingham’s Police at the Funeral (1931) and More Work for the Undertaker (1948), Mary Roberts Rinehart's The Album (1933) and S.S. Van Dine’s The Greene Murder Case (1928).


The writing in Jewel is excellent, in my view on a level with that of Rinehart as well as Allingham and her Crime Queen contemporaries Dorothy L. Sayers and Ngaio Marsh.  As one pleased reviewer noted of Peck’s mystery novel, “the writing, atmosphere, and characterization” make the story “something quite distinct."


The Warrielaw Jewel actually is set in the Edwardian era, 1909 specifically (“that period, so far away from modern youth," writes Peck, "when King Edward VII lived, and skirts were long and motors few, and the term Victorian was not yet a reproach”).

The narrator, Betty Morrison, wife of the lawyer for the eccentric, decaying gentry family of Warrielaws, tells the tale from the vantage point of the early 1930s, looking back over those shocking events in the vicinity of Edinburgh, Scotland, which included the death of elderly family head Jessica Warrielaw and the trial of her favored nephew for murder.

Involved in the affair is a treasured family heirloom, a so-called fairy-jewel, said to have been given to the Warrielaw family centuries ago by a glittering enchanted lady carried off and married by a dark and brooding laird ancestor. A curse is said to have been laid upon the jewel. Certainly dreadful happenings, whatever the cause, overtake the family in 1909.

There is investigation and detection, performed by a retired policeman friend of Betty Morrison’s husband; yet it is Betty herself who provides the final, crucial piece of evidence. The mystery itself is engrossing, although the best elements of the tale are found in the characters — particularly the various odd Warrielaws and their remaining retainers –and the Edwardian Scottish atmosphere.

I hope that one day Winifred Peck’s The Warrielaw Jewel is republished and honored as one of the more literarily accomplished mysteries of the Golden Age, for it certainly is deserving of such recognition, in my view.

When one reviewer declared The Warrielaw Jewel “in a class by itself” and added that “it looks as if [Mrs. Peck] were going to beat [Father Knox] at his own special game,” he was not, in my view, exaggerating.

Note: Winifred Peck went on to produce mostly mainstream novels, though after World War Two she returned to genre, writing a supernatural tale, Unseen Array (1951), and one additional mystery, the provocatively titled Arrest the Bishop? (1949).  Judging from The Warrielaw Jewel, both of these later novels would be worth seeking out.--The Passing Tramp
Posted by The Passing Tramp at 1:27 AM