John Dickson Carr's first detective series, which chronicled the exploits of French magistrate Henry Bencolin, is a short one, comprised of four novels Carr published from 1930 to 1932, plus a final volume, The Four False Weapons, that appeared in 1937.

Castle Skull (1931) is the third of the Henri Bencolin mysteries.  Like the other early novels in the series (It Walks by Night, The Lost Gallows and The Corpse in the Waxworks), it has  a splendidly lurid title, redolent of exoticism, the outre and horror.  Although Carr continued to employ these elements in many of his books over his long and successful mystery writing career, he toned them down somewhat from the early novels, where the horrific really predominates (as has been observed, I believe, by S. T. Joshi, It Walks by Night might be a pulp horror novel title). 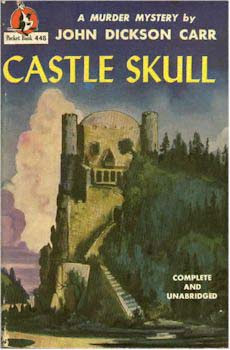 Certainly Castle Skull is steeped in the outre.  To begin with there's the highly Gothic setting, in the German Rhineland.

Many mysteries of the Golden Age take place in country houses, but how many take place in castles?  And what a castle is Castle Skull!  Yes, its highly eccentric owner, the larger than life magician Maleger, deliberately designed it to resemble a skull.  This 1940s Pocket edition captures the castle rather well, I think (except for the lovely sunny sky).  Not only does the castle look like a skull, but it is equipped with all the creepy paraphernalia you could ever ask for in such an abode; and Carr, as was his wont, makes the most of this.

The novel opens with quite a bit of back story.  Maleger, we learn, was murdered some twenty years earlier, his body thrown out of a train carriage into the Rhine.  Somehow this was accomplished even though Maleger's carriage was under observation the whole time and no one else was seen entering it (one of Carr's patented miracle problems, very nicely worked out too).

Maleger's estate was left to two friends, a Belgian banker named D'Aunay and a prominent English stage actor named Myron Alison.  A few weeks before the novel opens, something very bad happened to Myron Alison.  He was shot several times and then for good measure set on fire.  His blazing body was espied on the crazily grinning battlements of Castle Skull.

Just imagine what an opening this would make for a film! It strikes me once again what opportunities modern filmmakers are missing in treating John Dickson Carr as mystery's Mr. Cellophane, even as they film the umpteenth version of a Miss Marple mystery (now with rewritten ending!).  Unfortunately Carr himself does not make the most of it, because the the story of the murder is told secondhand to Bencolin and his young Watson, Jeff Marle, rather than being shown directly to the reader.  Obviously, it seems to me, the novel should have opened with the immolation scene.  We know from such later bravura Carr set-pieces as the exploding hot-air balloon sequence in Carr's wonderful historical mystery novel Captain Cut-Throat (1955) that Carr was absolute aces at directly depicting evocative action scenes.  But enough about that--back to further developments at Castle Skull!

Henri Bencolin is brought into the case informally and is soon investigating with good old, forgettable Jeff (first in a long, long line of many writer stand-ins for the author).  Across the river from Castle Skull is the country house of Myron Alison, where a house party was taking place during Myron's murder, conveniently providing us with our suspects.  There's Myron's sister, Agatha, known as "The Duchess"--even though she's not one; a famous violinist; D'Aunay and his wife; a young English gentleman; and a nice young woman, though modern.  There's also a middle-aged journalist hanging about the place, who happily is chock full of nuggets of Maleger-Myron Alison back story.

Soon Bencolin and Jeff are joined by Baron Sigmund von Arnheim, one of those stock monocled, know-it-all Prussian types common to Anglo-American books and films of that era. Von Arnheim and Bencolin are longtime rivals, so the two engage in a competition to solve the case, bandying much surfacely polite, improbably theatrical language with each other, in the highly archaic fashion that Carr, who seems to have wanted to live as an English cavalier in the seventeenth century, so much admired.

Just 25 when this novel was published, Carr handles the solution section of the novel (40 pages!) with laudable dexterity.  Von Arnheim solves the case!  Or does he....

Besides being grippingly narrated, the solution is eminently fair play, I think.  One has to admire not only Carr's ingenuity with murder designs--a skill John Street, for example, had too--but also Carr's admirable clue placement, which at times rivals the great Agatha Christie.  My only complaint (besides the absence of a castle floor plan--but see this extraordinary webpage on this matter) with Castle Skull is that the characters really don't do justice the superb setting.

The two really interesting characters in Castle Skull are Maleger and Myron Alison, both of whom, as murder victims, are off the stage when the novel opens.  As Douglas G. Greene has noted in his superb biography of Carr, John Dickson Carr: The Man Who Explained Miracles (1995), Carr somewhat softened Bencolin in Castle Skull, making him "slightly more human," but this softening "doesn't fit the personality that Carr has developed for Bencolin"--it merely makes him duller.  As for the country house crowd, they are sticks, with the exception of Agatha Alison, who is interesting because she is such an outlandish and improbable character.  I would have sworn Carr meant her to be a broad parody of Dorothy L. Sayers, but Carr would not have known Sayers in 1931.

Here is Carr's description of the stout, mannish, Duchess (who also smokes cigars, drinks stout and plays poker), which really does seem to foreshadow Sayers at Detection Club meetings in the 1940s and 1950s (judging by the uninhibited recollections of Christianna Brand): "She floundered in, her bulk compressed into a tight black gown which caused startling bulges in extraordinary places."

But it's the way the Duchess talks that's really extraordinary:

"Come right in, young fella-me-lad!  Have a bottle of stout.  Always drink three, myself, before I turn in."

"Well, well, you just tell the old Duchess about it!  Plague take me!  When all your fancy detectives are stumped, I'm going to take a hand!"

And so on.  All this conversation is uttered while Agatha is sitting "behind her table in a flaring negligee, drinking Guinness' stout."  From the words--especially recalling how Carr's later series detective Sir Henry Merrivale loves baseball too--I felt certain the Duchess was really Sir Henry Merrivale in drag, perhaps on a secret undercover mission in this very queer castle.

Heck, even now I still think "she" may have been, although this was one question even the great Henri Bencolin did not resolve!

Well, this finishes for now my Continental tour.  I'm headed back to the States (There's no place like home!), but will be stopping off briefly in a desert clime.  Who will I visit there?  Stop by tomorrow and see!--The Passing Tramp.
Posted by The Passing Tramp at 2:59 PM