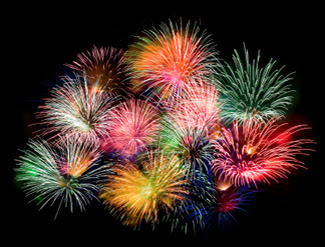 I hope to review at least that many in 2013, with at least some more recent books!  But, as stayed before, I'm a historian of the genre and plan to keep the focus on the past.  After all, the past keeps expanding, and there's a lot of ground to cover already.  So! On to....

The 2012 Best Blogged Books on The Passing Tramp.  So far we have:

Now to the Top Five: 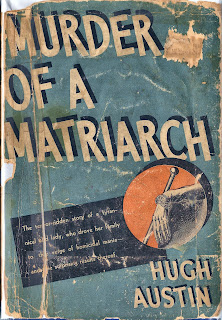 Hugh Austin's short-lived 1930s series of Peter D. Quint mysteries was highly regarded by detection aficionados.  In the 1960s Anthony Boucher still remembered the PDQ books fondly and called for them to be reprinted (no one listened).

The third volume in this five-book series, Murder of a Matriarch concerns the killing of one of the most repellent murderees in GA mystery fiction, one of those tyrannical wealthy old people we often see in this genre who seem to make it their mission in life to thwart their families in the cruelest ways.

It takes a long time for Hortense Farcourt to be sent to her reward, but this part of the novel is still quite engrossing, because of the strength of Austin's satirical writing.  The situation is amusingly presented, but there's pathos behind it all too.

After Hortense is murdered, the novel moves into high gear, and a very clever plot unfolds.  The author dares the reader to get the solution right.  Most people who read the book won't (of course, unless the book is reprinted someday, most people will never get the chance to read it, because it's extremely rare).

The second installment in Rufus King's Lieutenant Valcour maritime trilogy, Murder on the Yacht has the distinction of perhaps having been read by John Dillinger shortly before a famous shoot-out with the feds (really).  It's also the great Golden Age hurricane mystery and a viscerally thrilling read (maybe even Dillinger thought so).

Have Poirot's endless drawing rumor lectures before the assembled suspects in the David Suchet Agatha Christie productions become staid and boring to you?  Well, you won't be bored with the Valcour's here, I can assure you!  It's something truly unique in genre history....

The first in the maritime trilogy and one of the genre's great ocean liner mysteries.  A seemingly unstoppable fiend is committing a series of murders on a ship as it makes its tortured, desperate way from Bermuda to Halifax. There's terrific suspense, some fascinating characters, beautiful writing and a diabolical twist.  Now, what more could you ask for than this?

The Oklahoma Choctaw mystery writer Todd Downing considered Rufus King the greatest mystery writer of the 1930s, better even than Dashiell Hammett, Ellery Queen, John Dickson Carr, Dorothy L. Sayers and Agatha Christie.  He particularly liked the two Rufus King novels listed above.  Their influence can be seen in the use of an isolated setting (a train traveling from Laredo to Mexico City), the interesting character studies and the extreme state of tension achieved by the author.

Another influence Golden Age mystery fans will discern is Agatha Christie's Murder on the Orient Express (1934), which Downing considered an exemplary piece of detective fiction.

Admittedly, Downing's book lacks the strikingly original solution of Christie's classic tale, but, on the other hand, it's a much more exciting read.  And it is a fairly clued, genuine detective novel. 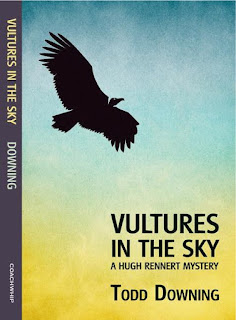 Finally, Vultures in the Sky offers a fascinating exploration of Mexican culture, by one who knew the country and its people well.  Downing, who taught Spanish at the University of Oklahoma for ten years, also authored a highly-praised non-fictional 1940 study of the country, called The Mexican Earth.

Happily, Vultures in the Sky has been reprinted in an affordable, quality paperback edition, along with most of Todd Downing's other detective novels.

In my view this Ruth Rendell novel, published under Rendell's Barbara Vine pseudonym, is a great tour de force of mystery fiction.  I generally feel a great deal of crime fiction of the last two decades has been too lengthy (more actually can be less sometimes, I think), but in this case the high page count is amply justified. 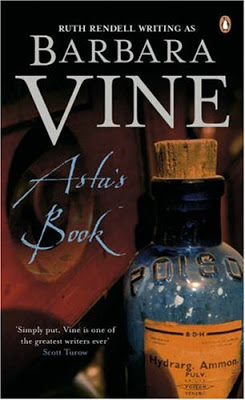 And, it must be emphasized, a fascinating puzzle plot.  Will you be able to untangle this great Crime Queen's fiendish web of mysteries?  Try and see.  Reading Asta's Book is a tremendously rewarding experience.

I do hope mystery fiction fans so inclined can track down some of these books (as well as others blogged here)!

Five of the Top 20 are currently in print, though of these only the Downing is a Golden Age work (the others in print are from the last half-century or so: the James, the Symons, the Macdonald and the Vine).  Let's hope publishers make a New Year's resolution to get some of the other books back in print in 2013!  TPT
Posted by The Passing Tramp at 2:30 AM