The Mother of all Murders: Murder of a Matriarch (1936), by Hugh Austin

Hugh Austin is one of those Golden Age writers about whom very little is known, yet his short run of Golden Age detective novels about quick-thinking police detective Peter D. Quint (P. D. Q.) was much praised in its day and fondly remembered afterwards as something really rather clever, even by the gold standard of that oh so very clever era of mystery writing.

In the 1960s critical eminence Anthony Boucher called for reprinting the entire series of five novels, which ran from 1935 to 1938, but sadly no one has heeded that call even to this day.

So, what do we actually know about Hugh Austin in 2012?

Well, his full name is Hugh Austin Evans (hey, perhaps a relative!) and he lived from 1903 to 1964.  Besides his Peter Quint series novels (which all had "Murder" in the title), he also published the non-series Lilies for Madame  in 1938 and and three additional, rather odd sounding mysteries in 1948-1949 (one of these latter books is reviewed over at Mystery*file.

On the endpapers of the Peter Quint mysteries, one finds a rather gimmicky but irresistible "Note to the Reader," wherein the author assures his readers that his books play absolutely fair with them:

"In short, this mystery can be solved on the basis of the clues that are given, and the solution is the one and only possible solution.--H. A." 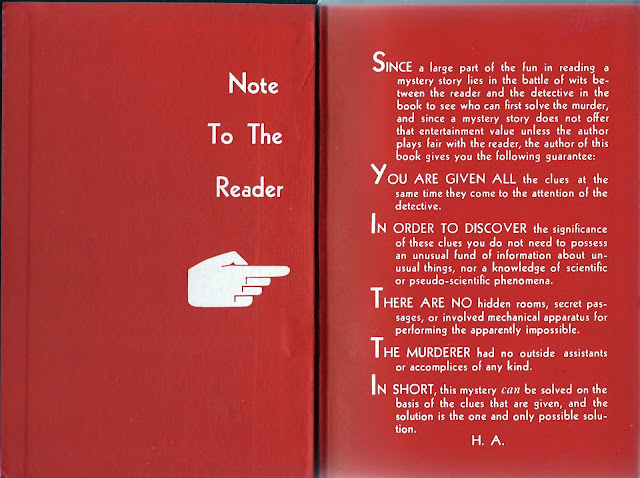 In the first Peter Quint novel, It Couldn't be Murder! (England, ever dignified, dropped that frantic exclamation point from the title when the book was reprinted across the pond), Quint solves the case in 24 hours.  With his second case, detailed in Murder in Triplicate, he becomes even speedier, catching the murdering fiend in but three hours!

By the time of Murder of a Matriarch, Quint has slowed down a bit (it's on day three that he makes his exposition before the gathered suspects), but it's still a very interesting case indeed.

"I don't want him arrested for trying to break my leg.  It is only the attempts to kill me that I feel I must chastise."--Murder of a Matriarch

Half of Murder of a Matriarch actually is quite leisurely, compared to the first two books in the series,  detailing events leading up to the murder of wealthy, elderly Hortense Farcourt, widow of a much henpecked chemical manufacturer.

The jacket flap of the novel calls Mrs. Farcourt "as hateful and hypocritical an old lady as you're likely to meet," and hoo boy! is this the truth.  The selfish and sanctimonious (and really rather sadistic) Hortense Farcourt is one of the most repellent characters I have ever come across in mystery fiction, and I was really glad, to be honest, when she finally went to her just reward.

Before that blessed event, we meet the various members of household, who all justifiably despise the evil, old bit-, erm, lady:

Hortense's unlikable daughter Clara, who married
Dwight Irvin, who works for the Company, but was never given the position he was promised
Hal Farcourt, a nephew, an amiable tippler and something of a betting man
Willie Jeddle, Hortense's brother, in his dotage, but carrying his hatred for his sister with him to the grave
Nan Rogers, Hortense's much put-upon, twenty-year-old great niece
Jeddle Rogers, Nan's nine-year-old brother, who wants a puppy
Mrs. Scroggins, the bad-tempered cook
Bertha Jablonski. the eavesdropping maid
Nelly Wagg, the gossipy laundress

All the characters are memorable, but perhaps best of all is Jeddle Rogers.  Rarely are children portrayed in Golden Age detective fiction, and usually when they are, they come across as distinctly stagey (Gladys Mitchell is a great exception here).  However, young Jed is the real deal.  He's just a normal boy, who wants to be able to play with a water pistol and to have a puppy, but his standard-issue boyish desires are cruelly thwarted by his perpetually disapproving Great Aunt, who is constantly threatening to send him to reform school for the mildest of infractions.

There's a wonderful passage where Jeddle is subjected to morally improving readings from his Great Aunt.  Gr'aunty Hortense, it seems, is a firm admirer of "that lovely authoress for children, Priscilla Prunella Spinter," who gave the world that beloved (by certain adults) series of books about the intolerably upright Rose Girl and Billy Boy.

[Billy Boy and His Friend] was to Jed much less real than any story of goblins and giants.  When he became excited he could almost believe in goblins and giants; but the idea of Billy Boy having a friend was just too much for his imagination.

Jed's favorite was Billy Boy and His Enemy.  By a happy misunderstanding it was also the volume most often read to him....Like the rest of Miss Spinter's works the tale was a simple one.  For nine tenths of the book the Enemy practiced assault, battery and mayhem upon an all-forgiving Billy Boy...[Jed] dutifully identified himself with the Horrible Example and avidly lived through the delectable experience of punching Billy Boy's nose, pushing him into a mud puddle, giving him a black eye, and--Jed thought it the finest climax in literature--knocking one of Billy Boy's teeth right out of Billy Boy's head!

The sardonic and wise humor of such passages as this one reminds me of the brilliant short story writer Saki (particularly his short story "The Storyteller").

Austin also can be poignant (actually, I found the above scene poignant too, underneath the humor), when pointing out the psychic costs, to suspects and investigators alike, of murder cases.  Here's Detective Quint's mordant thoughts upon seeing at Nan Rogers after Gr'aunty is finally shot:

She looked very wan and young and pathetic in the dead black of her garb of mourning.  Quint wondered irrationally why other policemen envied the head of the Homicide Bureau.  Oh, yes.  It was the publicity.

Austin does a great job at portraying not just the family but the servants, tradesman and cops too.  There's an exchange between a plumber and a policeman that is a fine instance of the use of American idiom in the Golden Age detective novel.  Austin also manages to depict a very credible police investigation, with numerous players and multiple ethnicities, including Italian, Jewish and Slavic (not just Irish!).

As for the puzzle, it's good!  Austin constructs a fairly clued, materially dense plot that keeps one guessing.  There's even a form of Ellery Queen's Challenge to the Reader on page 250.  My only complaint is that this is one mystery where we really did need a map of the house and grounds.

With lively characterization, pointed satire, a clever puzzle and credible police procedure, Murder of a Matriarch is a classic Golden Age family murder case.  One of the best crime books I have read this year, without  a doubt.  In fact, it's something of a crime in itself that this novel was last in print the year Franklin Roosevelt trounced Alf Landon.
Posted by The Passing Tramp at 2:53 AM