After he read Valentine Williams' mystery novel The Portcullis Room, the American detective novelist Todd Downing remarked that the novel's setting in a Scottish castle reminded him of the poetry of Sir Walter Scott.

Having read the tale myself, it's easy for me to see why Downing made the comparison.  The Portcullis Room is redolent of antique and eldritch Scottish atmosphere (appropriately, one of the characters is reading Shakespeare's  Macbeth).

As I've discussed previously, Valentine Williams was a man of action and even when he was writing a detective novel rather than a thriller, he deemed it imperative to make the story zip along.  "A murder story has to move," Williams avowed in World of Action.

Although a third of The Portcullis Room passes before a murder actually takes place, one doesn't cavil at this, for the interesting setting and lively characters and plot development keep one engrossed until a body obligingly drops.

Here Williams has smoothly fashioned the classic closed setting, or isolated location, situation, so beloved by Golden Age mystery fans today (even P. D. James is quite partial to it).

Visiting Toray Castle, located on an island, is a rich American (query: is there any other kind of American visitor to Great Britain in Golden Age mystery?) named Stephen Garrison (maybe a relative of mine--Garrison is a family name).

He's come on his private yacht, naturally, along with his longtime business assistant Philip Verity, his new girlfriend Phyllis Dean and, just to make things all right and proper, Phyllis' mother, who is quite intent on seeing that Stephen actually marries Phyllis.

Phyllis Dean is a memorable character.  She is very modern and very "American" and says things like this (when first surveying Toray Castle): "Quaint old dump!....Do you suppose they have a bathroom?"

I definitely could see the brash Miss Dean swanking it around Gosford Park or Downton Abbey at some future point.

The laird, a fine, courtly gentleman who is sadly pressed financially, is interested in selling the castle to Garrison, but his daughter Flora McReay is firmly opposed.  "It's hateful, you Americans and your money!" she plaintively cries at one point.

But there are worse problems for the McReay clan than the arrival of the wealthy and American Mr. Garrison.  Ensconced at Toray Castle is another, quite disreputable, group of guests, headed by the silky Comte d'Arenne ("gigolo and chard-sharp") and the shady Oscar Berg ("clumsy clothes and vulgar manner").

The Comte was a friend of the laird's late black sheep son, who died in the Foreign Legion, but what, oh what is the story behind the presence of the objectionable and ill-bred Mr. Berg (who, by the way, we are pointedly informed is not Jewish but Scandinavian; in fact he seems almost like a stand-in for Williams' famous Prussian-esque German villain Clubfoot)? 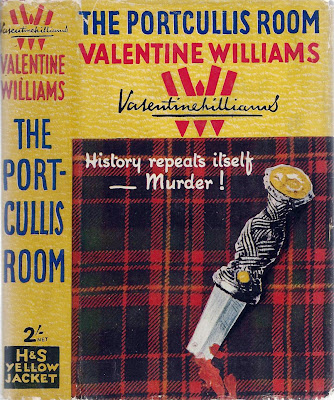 When one of the guests is found dead in the portcullis room (which legend says is haunted--of course!), the laird's ceremonial dirk sticking out of his back, those still alive find to their further dismay that Castle Toray is cut off from the outside world by a storm (of course!).  Will Death strike again before the police can get there?  Of course!

Dorothy L. Sayers strongly praised The Portcullis Room, declaring that it was "full of colour and suspense."  The reviewer for Punch speculated that never had a thriller "been furnished with a neater or more ingeniously contrived solution."

What do I say about the solution?  Check in on Saturday and see, when I complete my look at Valentine Williams' interesting life of crime.
Posted by The Passing Tramp at 3:27 AM