Eden Phillpotts' Golden Age mysteries and crime novels were published in the United States by Macmillan, who did the author proud.  Here are some of nice examples of Macmillan's work: 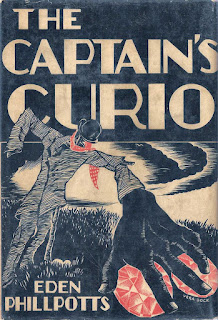 This jacket design by the talented Vera Bock (b. 1905), whose mother was a Russian concert pianist and father an American banker, conveys the pastoralist setting of Daleham-on-Exe, a village left "horror-stricken" when old "Martin Knox is stabbed through the heart and left dead on the floor of his bedroom."

Implicated in the shocking criminal affair are "two rubies of great value." 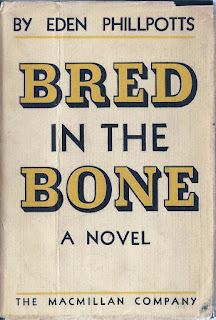 Nothing fancy here, but certainly the stark, blunt jacket design gives an impression of the deadly seriousness of this  Phillpotts tale.  "This is much more than a murder story," we are told on the inside flap.  "It is a study of character as it develops in a man and a woman under stress of terrible happenings."  Wonder of wonders: Could we have evidence here that "crime novels" were written in the Golden Age of detective fiction too?! 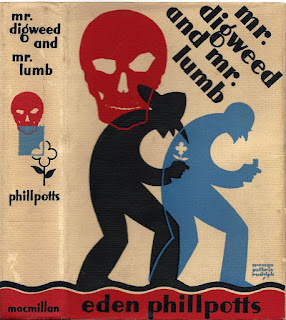 This jacket is by Norman Guthrie Rudolph (1900-1985), a Pennsylvania artist.  I think it does a great job capturing the simple, archetypal quality of this modest but charming Phillpotts' detective story, about murder and "two elderly bachelors": Mr. Digweed, who "lived only for his garden," and Mr. Lumb, whose "only interest was his stamp collection."  This is one of Phillpotts' shortest and most straightforward detective stories.

Macmillan even went the extra mile with the book boards themselves, where the jacket design of the "two elderly bachelors" with their prized possessions is repeated. 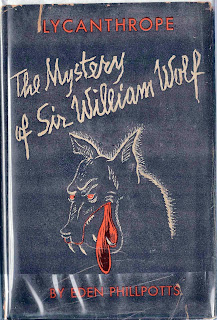 A scary jacket design for this novel, called "a masterpiece of the macabre" by Macmillan. "[A]long with suspense and horror," Macmillan adds, "the novel has a dark complexity, a plot that will require all the reader's skill to unravel."

Well, I didn't find it quite that hard to solve!  And the loquaciousness of the archaic characters will dampen interest for some modern readers, I suspect.  Still, I do think Lycanthrope has a certain elemental power. 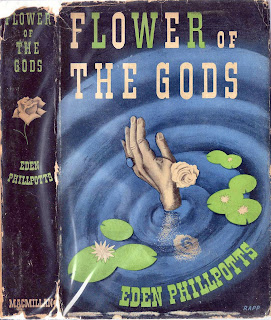 This late Phillpotts mystery, published in the United States when the author was 81 years old, bored Anthony Boucher to tears, yet others liked it.

Whatever people think of the novel itself, the jacket, seems to me undeniably splendid.  Involved in the tale is "a rare plant from the jungles of the Andes...."

Coming next week, an in-depth look at another important English crime writer from the Golden Age of the detective novel.
Posted by The Passing Tramp at 4:06 PM