Man of Action! A Review of World of Action (1938), by Valentine Williams

When one writes about mystery writers of the past, one finds oneself wishing that many more of them had penned autobiographies.

Yes, Agatha Christie and Ngaio Marsh, for example, both did so, yet even those works are characterized as much, if not more, by reticences as by revelations.  And perhaps this is only fitting.  Mystery writers of the Golden Age often seem to have embraced mystery fiction, surely the great genre of concealment, precisely because they were emotionally circumspect by nature.

What would the highly private Ngaio Marsh have thought about a modern biography that attempts to prove Marsh was a lesbian, or Agatha Christie about books that obsess over her infamous 1926 disappearance?

Probably they would not be too pleased with them, I imagine, because these were reticent women who valued keeping their private lives private.  But the thing is, when a person becomes an accomplished writer, inevitably people want to know more about that person, and how her/his life reflects on her/his work.

What I would have given for biographical reminiscences by the subjects of my Masters of the "Humdrum" Mystery!  Actually, Cecil John Charles Street (John Street for short) wrote about his Great War experiences, but there was so much more of interest about his life that in fact illuminates his own fiction writing.

Although Street has been portrayed as a "Humdrum," in his fiction he often defies unthinking expectation, I find. For example, Street wrote sympathetically of unorthodox women and unusual marriages, a characteristic of his work that one understands better when one discovers that Street, estranged from his wife, lived with another woman as his spouse for over two decades.*

*(Street finally was able to marry the second woman, Eileen Waller, upon the death of his first wife; the pair lived happily together for fifteen more years, until Street's own death.)

The devout Christian Freeman Wills Crofts is interesting by virtue of his virtue, you might say; but  Alfred Walter Stewart, who wrote fiction under the name J. J. Connington, was a highly opinionated, acerbic and unconventional chemistry professor who could have penned a fascinating autobiography, I'm sure.  Alas, however, he failed to do so (though his correspondence with the now celebrated horologist Rupert Thomas Gould, discussed in my book, itself is fascinating).

All this brings me (finally!) to Golden age mystery writer Valentine Williams, who did pen an autobiography, in 1938, when he was 55.  This volume is called World of Action. 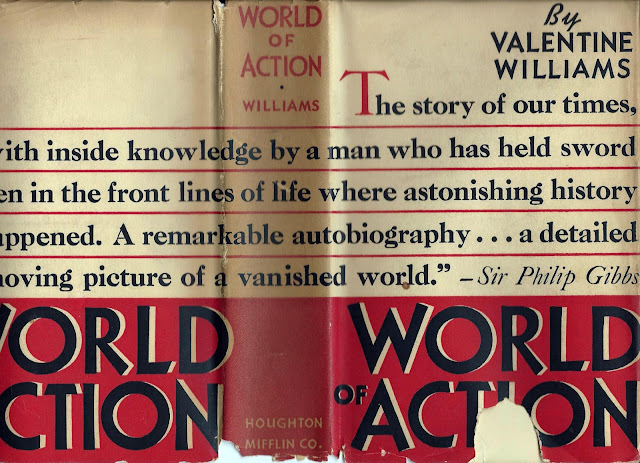 World of Action is filled with engrossing accounts of Williams' life as a journalist and experiences in the Great War, but additionally, I'm also pleased to note, it does not stint on the author's life of crime writing (as, oddly, do some lives of mystery writers).  For instance, Williams discusses the creation of his great master spy criminal, "Clubfoot," noting that the "villains of fiction, rather than the heroes, were ever my meat.  Fagin, Count Fosco, Doctor Nikola, Count Dracula, those were the boys for me."

The Man with the Clubfoot was published in 1918, writes Williams, "and has continued sell ever since," being "translated into French, German, Italian, Spanish, Russian, Polish, Hungarian, Finnish, Swedish, Danish, Estonian, Dutch and Japanese.  For some reason, when it first appeared it was considered suitable reading for the young, and several men have told me it was read out to them at their private schools."

So many Golden Age British mystery writers saw service in the Great War, but relatively few of them wrote about their experiences in any detail.  John Street and Valentine Williams are exceptional in this regard.

During the Battle of the Somme, Williams tells us, a British "shell landed beside me, and blew me sky-high."  This errant shell changed the course of Williams' life.

Shell-shock is the result of the wearing down of the normal nervous resistance beyond nature's ordinary guards.  I have seen men suddenly smitten with shell-shock after a spell of sharp bombardment, led, sobbing and shrieking, like people possessed of the devil in the middle ages, from the trenches.  I was not in as bad a pass as that, but the reaction came when I found myself installed in the Empire Hospital, Vincent Square....Every night I would dream of corpses, mounds of them....

Over a long convalescence, Williams found mental refuge in composing an escapist spy thriller and the deliciously nefarious Clubfoot was born.

In World of Action Williams also has interesting material on the United States, a country he visited frequently in the 1930s.

We learn that the American gangster Vincent "Mad Dog" Coll (the baby killer with the matinee idol looks) was the inspiration for a character in Williams' US-set 1933 Trevor Dene mystery novel The Clock Ticks On (Nicholas Cage played Coll fifty years later in the 1984 film The Cotton Club).

Contrary to the image of the Golden Age British mystery writer as a hopelessly obtuse reactionary, Williams writes sympathetically about Franklin and Eleanor Roosevelt and with perception about the place in modern American life of the burgeoning metropolis of New York:

And here let me interject a word about the familiar dictum that "New York is not America."  It may be that the seven-million metropolis with its tremendous foreign-born population--its one and a half million Jews, its Italian elements growing in numbers and powers so rapidly that they are ousting the Irish in city politics, its Irish and Poles and Greeks--appear to millions of God-fearing, puritanical New Englanders and Middle Westerners, to millions of southerners steeped in the Cavalier tradition, as a blot on the face of the Republic their fathers wrought; it may be that for voting purposes the raucous cacophony of Manhattan and its four allied boroughs is not the authentic voice of America.  But with every year the social and cultural influence of New York over the rest of the country is becoming, for better or worse, more marked.

Interesting words to note, not long after the divisions seen in the recent 2012 political campaign in the United States.

Coming this week, more on Valentine Williams' thoughts on crime and mystery writing, a review of one of his novels and Todd Downing news!
Posted by The Passing Tramp at 10:22 PM