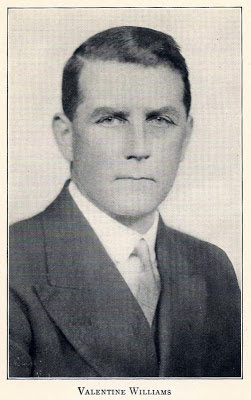 While convalescing from shell shock suffered during the Great War, the English journalist George Valentine Williams, who served as a captain in the Irish Guards, took up writing "shockers" on the advice of the prominent genre writer John Buchan.

With The Man with the Clubfoot (1918), Williams introduced Dr. Adolph Grundt (or "Clubfoot"), who became one of the great "master criminal" villains of thriller fiction of the 1920s and 1930s and launched Williams on a lucrative career as a crime writer.

Many of these works are master criminal thrillers in the Edgar Wallace/E. Phillips Oppenheim mode (some with Clubfoot, some not), but some are detective novels (or at least "mystery" yarns) as well.  I believe all the following works, close to half his output, would qualify as such:

Williams' series detectives were Trevor Dene, an English policeman (though most of his cases seem to take place in the United States), and Mr. Treadgold, a Savile Row tailor and amateur sleuth.

Williams also authored some interesting essays on the writing of detective fiction and thrillers and contributed to the round robin mystery novel Double Death.

He often traveled to the United States (in fact he died in a New York hospital, where he had come for treatment of his ultimately fatal malady) and his works often reflect convincing familiarity with Americans and the American scene (in contrast with many other British-authored mysteries!).

I will have a piece up in the next day or so on one of the above-listed books, so stay tuned!
Posted by The Passing Tramp at 2:42 PM