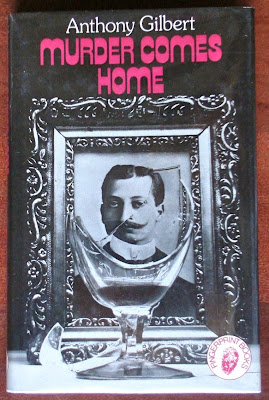 The 1950 Anthony Gilbert mystery Murder Comes Home is the best pure detective novel I have read by this author (who actually was a woman, Lucy Beatrice Malleson).  It has the qualities characteristic of Gilbert mysteries--a sprightly writing style and good characterization--plus, less commonly with this author, a murder problem that holds the reader's interest till the very end.

It all starts with a nice young couple being called in by a doctor to witness an old lady's will.  Not long afterward, the nice young husband finds in the newspaper that the old lady was murdered, smothered to death apparently.

Evidence provided by him and his nice young wife leads to the arrest of the old lady's insolvent sister and brother-in-law, both of whom are out-of-work actors. This pair were the beneficiaries of the old lady's new will, which is rather odd, since they had for years been estranged from the old lady, on account of the sister having run off long ago with --gasp!--an actor.

Anthony Gilbert knew London well and her portrayal of the locals--particularly landladies and housekeepers--is first-rate.  Further, the novel was published at the time of the many sudden changes wrought by the aftermath of World War Two and the rise of Labour; and there's a good deal of interesting social observation regarding all this sprinkled throughout the novel.

And there's some pithy writing too:

Mrs. Bennett looked rather startled.  She wasn't used to people quoting the Bible in her own lounge.

With noticeable regularity widows frequently express themselves better off without their blessedly dead husbands, while wives regret the ones they have.

Indeed, there's not one happy marriage in the book that I recall, besides that of the nice young couple (and give them a few years!).

"Father had the most old-fashioned ideas.  He thought it was beneath his daughters to work in a shop or an office but not beneath them to marry anyone who could provide them with a roof and three meals a day."

This sentiment clearly expresses Gilbert's own life experience.  When her stockbroker father suffered financial reverses in the 1910s and the family's standard of living precipitously declined, Gilbert found that her genteel ladies education failed to provide her with the qualifications she needed to get good work.

Fortunately with her natural talent and intelligence Gilbert eventually attained success and a steady income as a mystery writer.  Yet she never forgot her troubles earlier in life, which won't surprise the reader of Murder Comes Home.

(Still some more to come on this writer, next week I think! TPT)
Posted by The Passing Tramp at 6:18 AM