After Margery Allingham's untimely death in 1966, her husband, Philip Youngman Carter ("Pip") briefly continued the Albert Campion mystery series until his own untimely death in 1969. Pip completed Margery's Cargo of Eagles (1968) and then wrote two Campion novels of his own, Mr. Campion's Farthing (1969), said to be based on an idea of Allingham's, and Mr. Campion's Falcon (1970), published posthumously.


Like a lot of fans, possibly, I passed for years on reading the "Pip" Campions, simply because they aren't by Margery (they were reprinted by Carroll & Graf twenty years ago, but more recently Felony & Mayhem seems to have opted not to when they reprinted Allingham's novels).  But Barry Pike, who after all should know, assures us they actually are quite good.  I'm halfway through with the first one and I have to say that I agree so far.

Youngman Carter's writing, like Allingham's, is fluent, colorful and expressive.  He tells an interesting story and peoples it with some memorable characters.

How much does his work resemble that of Margery Allingham's?  Quite a bit, actually.

Mr. Campion's Farthing, which I discuss in this part, has turns of phrase and types of characters that are quite reminiscent of Allingham's work.  Campion himself is rather sober and recessive, but then as I recall it he is rather so in Allingham's later work as well.

Written at the midst of the Cold War, the plot of Farthing involves Russians and spies and is somewhat thrillerish, but, again, that resembles some of Allingham's later work (The Mind Readers certainly), as well as some of her earliest work (Sweet Danger).

In Farthing, sinister events converge on Inglewood Turrets, a great Victorian pile in metropolitan London, now operated as a house museum by Lottie Cambric, great-niece of the original builder, with the help of her nice Perdita Browning. 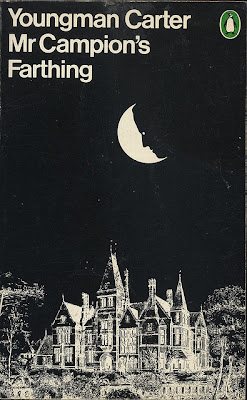 Miss Cambric specializes in entertaining the the great (and the greatly talked about) at her ancestral mansion.  Among her frequent guests are international diplomats.  One of these personages, a Russian named Vassily Kopeck (i.e., Farthing), disappears after staying at Inglewood Turrets.  Soon the Russians, as well as the British, are looking for Kopeck.

And Mr. Campion is concerned in the matter as well, of course.

The grafting of an Eric Ambler/John le Carre international espionage plot onto all this Victoriana may be offputting to some Allingham fans.  However, the Victoriana is really well done.

As for the characters, grande dame Lottie Cambric is a classic Allingham personality ("I hate getting out of period but sometimes one has to be modern"), and Perdita Browning and her young man Rupert are a charming pair of Allingham-ish nice young lovers.

Here's an exchange that gives you an idea of Lottie Cambric:

"You have a full house next weekend?"

Yes, Albert, a full house next weekend.  Twelve, or thereabouts.  I cheated--just a little--by inviting Molly and Jack Croesus, who are as poor as church mice and have been ruined by their name.  I asked her once why she didn't change it but she said her maiden name was Gold and that was nearly as bad.  They're sculptors and never pay any bills anyhow, but very good entertainers--always on my free list.  I hope you'll be here?"


Youngman Carter has rich descriptive writing as well.  Some of the passages definitely reminded me of Allingham.  He even uses the that/which sentence construction Allingham loved so much ("the buzz of conversation had reached that particular pitch of intensity and warmth which to an experienced ear spells success").  And there's much employment of clever verbs, adjectives and adverbs.  An oil stove, we're told, "sulked ineffectively in the fireplace."  The "first impact" of an explosion at Inglewood Turrets is described as "more insulting than terrifying."

There is plenty of pithy stuff here.  One character declares that one of Lottie's employees, an Indian,is a "suspicious character" because he "reads Chairman Mao and Trollope in his spare time."

I couldn't help wondering if one character, Felix Perdreau ("a theatrical figure more elegant than reality by the merest fraction"), wasn't a bit of a self-portrait by Youngman Carter, who is known to have philandered quite extensively (we have learned of late, for example, that in the early 1950s Youngman Carter fathered a child with writer Nancy Spain).  Here's Lottie Cambric on Felix:

He likes admiration but he gets bored very easily and I think that the trouble is that the girls he finds entertaining mentally don't attract him in other ways and, of course, vice versa.  It so often happens with that sort of man.

And here's Youngman Carter on the fashionable set, c. 1969:

About them circulated the latest and least repressed of modern novelists, a couple of drama students of indeterminate sex and a picture dealer whose fortune was as new and outrageous as the imitation tattooing which covered most of his mistress's shoulders.


In this late Campion tale, Lugg is nowhere to found, nor Campion's wife.  However, Guffy Randall is mentioned (I recall him from Sweet Danger).

At one point a villain mocks Campion as follows:

"You're a friend of old Guffy Randall, who's a member of my club, and I've heard him yakking about your talents.  Tedious.  Both of you seem to be as up to date as a model T Ford....You're not with it, old man."

Of course, even in the Swinging Sixties, Campion is the one who proves he's still with it!  And Youngman Carter was with it as well--at least sufficiently to make Mr. Campion's Farthing an enjoyable tale.
Posted by The Passing Tramp at 3:29 AM