J. B. Priestley (1894-1984) and Gerald Bullett (1893-1958) were respected mainstream writers who occasionally dabbled in the crime fiction genre (the former writer is still relatively well-known today).  In this case of the 1933 thriller novel I'll Tell You Everything, the two men dabbled jointly, to good effect. 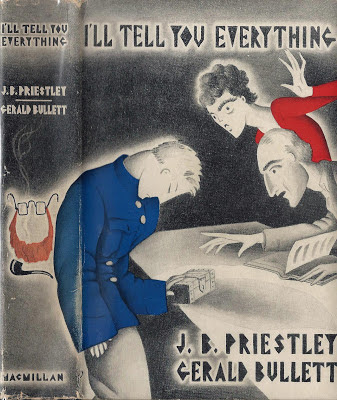 I'll Tell You Everything is a joyful send-up of the Golden Age thriller, where the emphasis is on suspense and excitement, not the measured and logical ratiocination of a murder problem.

This type of book once was associated most with such hugely popular authors as the astonishingly prolific Edgar Wallace, the bestselling writer in England in the 1920s; "Sapper," creator of that fearless, jingoistic dunderhead Bulldog Drummond; and Sax Rohmer, father of the fiendish criminal mastermind Dr. Fu Manchu.

However, today the most read Golden Age thrillers probably are those titles, such as The Secret Adversary, The Secret of Chimneys and The Seven Dials Mystery, tossed out occasionally by Agatha Christie as respites from her much more onerously plotted Hercule Poirot detective novels (though Poirot himself got ensnared in one Christie thriller, The Big Four).

Christie's thrillers themselves were pastiches of Wallace, Sapper and Rohmer, which makes their survival when works by the originators have disappeared rather ironic (it should be noted, though, that the the Fu Manchu series is being reprinted). 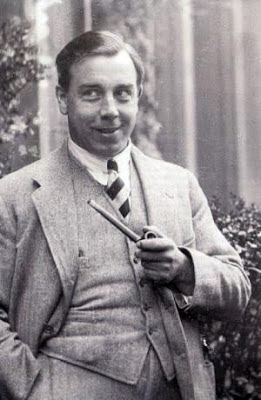 Be that as it may, the fact that people still enjoy books like The Secret Adversary and The Secret of Chimneys in 2013 should encourage some bright publisher to reprint Priestley's and Bullett's I'll Tell You Everything; for it is quite as enjoyable, I think, as Christie's thrillers, if not more so.

The novel is a highly literate delight, somewhat in the manner of the 1940s/1950s thrillers of Michael Innes, like The Secret Vanguard (1940), From London Far (1946) and Operation Pax (1951)--though not so self-consciously literary.

The great suspense director Alfred Hitchcock is famous for, among many other things of course, popularizing the idea of the MacGuffin in film.  The MacGuffin is the item that the various parties at odds with each other are pursuing.  In Priestley's and Bullett's I'll Tell You Everything, the MacGuffin is a small silver casket, which changes hands a great deal over the course of the novel.

The protagonist in Everything is Simon Heath, "lecturer on Ancient and Earlier European history at the University of Cambridge" (he's "already quite an authority on the Dark Ages").


On a train to London to spend his vacation with his jaded journalist cousin Oliver, Simon encounters in his passenger compartment a highly agitated Italian professor, a Dr. Pianella, who, pursued by an obvious ruffian, exhorts Simon to take the casket, which, he avows, hold "the leetle bones and ashes of the Iron Prophet," Yann:

"Of him you have heard in your history, eh?"
Simon rapidly searched his memory.  No, he confessed, he had never heard of the Iron Prophet, the Prophet Yann.  "It's rather out of my place and period," he added, feeling that something of the sort must be said for the honour of Cambridge scholarship.

The ingenuous Simon ("He'd believe anything you told him," says his cousin Oliver of him, "provided it had all happened since the eleventh century") hides the casket in his suitcase and is launched on an adventure involving multiple crooks, a pretty girl (Zoe--perhaps not her real name) and by my count six new, entirely different versions about what precisely the casket does contain, all prefaced with the pregnant words, "I'll tell you everything."

There's amusing satire of naive Cambridge lecturers, facetious, fabricating journalists, detectives who like to don outrageous and unconvincing disguises and the conventions of the thriller genre itself.

Additionally--and at odds with the typical ideological orientation of Golden Age thrillers--British xenophobes and anti-intellectuals are satirized in the form of the patriotic political group known as the Britishers:

In the bar were three gentlemen of a military cut, yapping together like fox terriers.  They were straight, stiff, well-groomed men in their middle forties, and to Oliver's eye they were all exactly alike.  They had little close-clipped moustaches, and a staccato, close-clipped manner of speech, admirable for commanding doomed battalions to attack impregnable salients.

This is a clever, genially satirical book, with lively characters and situations.  J. B. Priestley and Gerald Bullett obviously enjoyed themselves writing I'll Tell You Everything and you should enjoy reading it.