Short Form 2: The Casebook of Jonas P. Jonas and Other Mysteries (2012), by Elizabeth Ferrars

Crippen & Landru has published a new collection of short stories by Elizabeth Ferrars (1907-1995), over three decades after her first collection, Designs on Life (1980), was published (in the United States she was known as E. X. Ferrars, which is the name Crippen & Landru uses).  I thought it would be nice to review these two books in succession.  I meant to have this posted Monday, but flu intervened!  Even passing tramps get laid low by sickness occasionally.  Must be the food.

The Casebook of Jonas P. Jonas and Other Mysteries includes seventeen Ferrars crime tales, ranging from the near "short shorts" (the six cases of Jonas P. Jonas, "Suicide" and "Look for Trouble") to longer works like The Trap and The Handbag that read more like novelettes.

The shorter shorts are unique in Ferrars' short form output in being pure tales of ratiocination.  The Jonas P. Jonas tales also offer, obviously, a series sleuth: a garrulous retired private detective, who tells of his exploits to his niece in the hope that she will write his memoirs.  All six of these stories originally appeared in the Evening Standard in the second week of December 1958.  Four were reprinted in Ellery Queen's Mystery Magazine.

My favorite of these was "The Case of the Blue Bowl," which is illustrated on the cover.  In four pages Jonas P. Jonas tells of the clever little problem of the disappearance of a reputed village miser.  Has her nephew committed foul play?

The key clue is a piece of Chinese porcelain (Philo Vance would be pleased) and there's also a neat bit of social history concerning milk bottle deliveries.  It's an impressive achievement to pack this much incisive plotting into such a short tale.


"Suicide?" and "Look for Trouble" were originally published in The Saint Mystery Magazine in 1964.  Both offer solid little murder problems.

Ferrars later reworked and slightly expanded "Look for Trouble" as "The Canceling of Mrs. Arbuthnot," her contribution to the eightieth birthday festschrift for Julian Symons in 1992, but I think the original version, involving a murder that implicates the personnel of a hair salon, is superior.  My only complaint is that the shortened title doesn't make much sense (however, the original, longer title, gives away the mystery).

Between the novelettes, I most enjoyed The Handbag, which tells of theft and murder during one of those English stately home tours.

The Handbag, which originally appeared in 1960 in the magazine supplement to the Toronto Star, has many of the elements found in Ferrars' novels: a murder in genteel surroundings, a nice young woman in peril and a bit of romance. 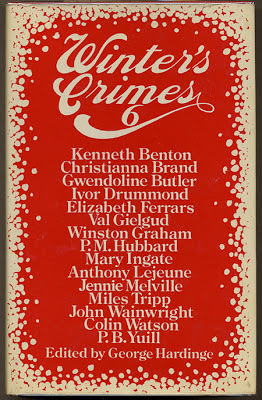 Six of the other stories in Casebook appeared originally between 1972 and 1992 in Winter's Crimes, the fine English crime story anthology series.  None of these is as good as Scatter His Ashes, Ferrars' Winter's Crime's contribution that was included in Designs in Life, but all are worthwhile.

Three of these Winter's Crimes stories were reprinted in Ellery Queen's Mystery Magazine, though not my two favorites of the bunch, "The Long Way Round" (1972) and "Sequence of Events" (1977).

"The Long Way Round" resembles one of those splendid Roy Vickers inverted murder tales, telling of Leo's plot to murder his wife's uncle in Cyprus.

I don't know why this story was never reprinted in EQMM.  Perhaps there was too much for EQMM about the instability in Cyprus owing to conflicts between Greek and Turk Cypriots (Cyprus had achieved independence from Great Britain in 1960).  I found all this very interesting, however, and it's cleverly worked into the plot.

"Sequence of Events" is an overtly humorous story about a local village feud that starts with stolen carnations and ends with multiple murder (or does it?).  I can imagine Ferrars sharing a laugh with her husband, the prominent plant physiologist Robert Brown (1908-1999), over this winning tale.


I should also make note of Instrument of Justice (1981) and Stop Thief (1992).  The former tale concerns a desperate wife who will do about anything to get her hands on some blackmail photos of herself.

The latter tale, Stop Thief, was Ferrars' last original short story, published when she was 85.  This is another pure crime suspense tale, about a husband whose wife, having recently suffered a miscarriage, is engaging in an escalating pattern of shoplifting.  It's set in the village of Lexdale--one of those charming, genteel communities in the English home counties, where, despite the charms, bloody murder runs rife, at least in the fictional work of Elizabeth Ferrars--and is a fitting last testament to Ferrars' work in the short form.
Posted by The Passing Tramp at 2:42 PM