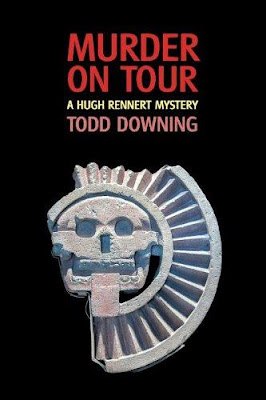 It's out now!  Todd Downing's first published detective novel, Murder on Tour, which introduced sleuth Hugh Rennert.  The original edition of this book is so rare even I never had a copy of it.  It's a great thrill to be able to make it available again, after eighty years, to fans of classical mystery fiction.

There is also a new introduction by me, never published before, with new information about Todd Downing, courtesy of his sister Ruth's son. It's titled "Day of the Dead: Todd Downing and Murder on Tour."

Without further ado, here is the publisher's blurb to the book:

U. S. Customs Agent John Payne was hot on the trail of the party he suspected of smuggling Mexican antiquities across the Texas border into the United States. Too hot on the trail to be left alive! On October 27, 1933, Payne was found dead, strangled, in his San Antonio hotel room. Three days after the discovery of Payne's savagely slain body, senior Customs Agent Hugh Rennert is in Mexico City to join the thirteen members of the Inter-American Tours party, late of San Antonio. Rennert is hunting for Payne's calculating and callous killer. The party of American tourists seeing the sights around Mexico City initially seems innocuous enough, yet in actuality Murder travels masked among them, patiently waiting, as the macabre Mexican holiday Dia de los Muertos (Day of the Dead) approaches, for the opportunity to strike again. Who will be the next to die by violence, before Hugh Rennert finally cracks the case and corners his quarry? First published in 1933, Murder on Tour is the first in Todd Downing's acclaimed series of seven Hugh Rennert detective novels. Read it and see why the New York Times Book Review proclaimed Murder on Tour a "well fashioned baffler" with "characterization . . . contrived with unusual skill."

It has been about fifteen months since I visited Todd Downing's birthplace of Atoka, Oklahoma, and decided to do my bit to revive his work.  It has taken some time and effort, but I'm glad I did what I did.  Working with Coachwhip, I will continue to do what I can to help get other Golden Age mystery authors back in print.  There is yet another middle American mystery writer coming back soon.  Stay tuned!
Posted by The Passing Tramp at 11:50 PM