Castle to Let: The Intrusive Tourist (1935), by Mrs. Baillie Reynolds

Gertrude Mary Robins (c. 1854?-1939)--or to use the Victorian-style matronly name under which she wrote, Mrs. Baillie Reynolds--is, like another Golden Age mystery writer with a similar married-name moniker, Mrs. Victor Rickard (Jessica Louise Moore, 1876--1963), an almost entirely forgotten writer, though she once appears to have enjoyed a certain popularity, being published on both sides of the Atlantic over several decades.  Her birth date is not even certain (another source gives 1875, but then states she was married in 1890, which seems unlikely if she was born in 1875).

Gertrude Robins was the daughter of Julian Robins, a barrister.  Another Robins uncle was a solicitor, an aunt married a vicar (a Reverend Joy; one assumes it was a happy marriage) and two final uncles were clergymen, one the Rector of Eccleston, Cheshire and the other Arthur George Henry Robins, Chaplain to Queen Victoria at Windsor from 1878-1882.

Robins was educated at the South Hampstead High School for Girls.  After her marriage to Louis Baillie Reynolds, she had three sons.  Her first novel, Keep My Secret, was published in 1885, under the name Gertrude Robins, five years before her marriage to Mr. Reynolds.  She once served as President of the Society of Women Journalists and was a suffragist and cyclist.  Here is a link to her National Portrait Gallery photograph, from around 1916.

I'm not sure how many novels with criminous content that Gertude Robins wrote, but her novels were published in the 1930s by Hodder & Stoughton (Britain) and the Doubleday, Doran Crime Club (United States), indicating definite criminous content! 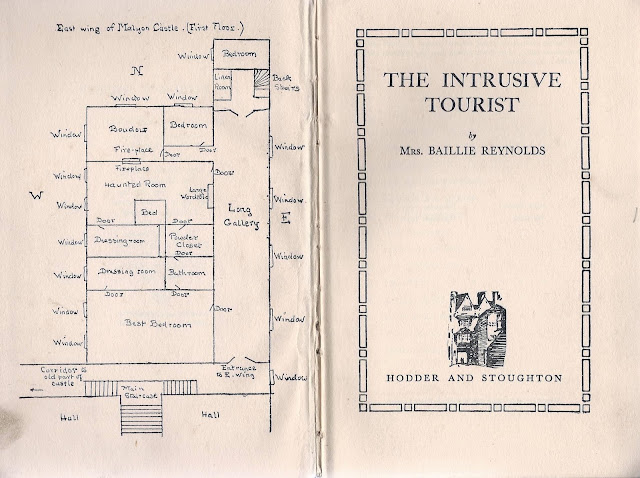 Gertrude Robins' The Intrusive Tourist (1935) essentially is a Jane Austen or Georgette Heyer novel with mystery elements.  We have a handsome hero and a lovely heroine who spend most of the novel bickering, but we just know they will get together at the end.

It's very charmingly done, but surely also of appeal to the mystery fan is the mystery element in the plot. A mysterious American, Gerard Athred, has turned up in England, evincing interest in an ancient English estate, Malyon Castle, owned by Sir Rodney May, brother of the lovely, young Valnora May.

It seems that long ago there was a dastardly murder among the local gentry and that murder has implications for the present-day characters.  There's quite an exciting climax, involving the castle's proverbial "haunted room."

I quite enjoyed this novel, though it's really more a romance story with mystery elements, rather than a detective novel.  But it's appealingly written (there's a floor plan--important to the tale--as well as Americans who don't constantly speak in American slang) and it makes me want to seek out more of the author's works.
Posted by The Passing Tramp at 2:07 PM