Christopher St. John Sprigg (1907-1937) died before his thirtieth birthday, killed fighting for the Republican side in the Spanish Civil War. Between 1935 and 1937 Sprigg rapidly developed into one of the foremost English exponents of Marxist critical theory.  Whether he would have kept producing detective novels had he survived the Spanish Civil war is highly doubtful to me (after his Marxist conversion he referred to his detective fiction as "trash").  However, while he lived he produced seven mystery novels (the last published posthumously).  These are:

Sprigg also published a psychological crime novel, This My Hand, in 1936, under the name he used for his Marxist criticism, Christopher Caudwell.

Copies of Sprigg's detective fiction have always been rare since I started following his fictional work; the last few years it seems to have completely vanished.  This is a shame, because Sprigg produced an interesting, if small, body of crime fiction.

Fortunately, Oleander Press has reprinted Sprigg's Fatality in Fleet Street as part of its "London Bound" series (paperback and eBook).  I hope someday caution can be thrown to the wind and all of Sprigg's crime fiction reprinted!

Fatality in Fleet Street is the second of four Sprigg mysteries with Charles Venables as amateur sleuth.  Sprigg clearly modeled Venables after Dorothy L. Sayers' Lord Peter Wimsey.  With his monocle and his facile wit, Venables immediately reminds one of Lord Peter, though Venables is without both a title and a Bunter--both handy things to have in life!

In Crime in Kensington, Venables, a society page reporter, solves a murder at a bizarre London guest house.  There is a certain love interest for Venables in the novel, though we learn in Fatality that he and Lady Viola broke up a month earlier over a bad bridge bid. Charles finds a new love interest in Fatality in the form of Miranda Jameson, the woman's page editor.  Charles, incidentally, is now the crime reporter for the Mercury, on the strength of his having cracked the aforementioned crime in Kensington. 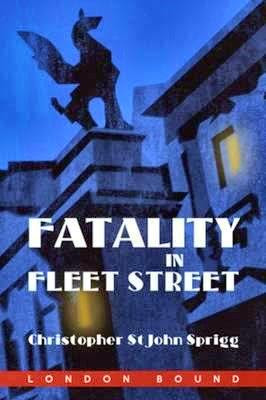 In Fatality in Fleet Street, Charles' own boss, Lord Carpenter, Governing Director of Affiliated Publications (36, 563, 271 readers), is stabbed to death in his office, just as he is preparing to launch a press propaganda campaign that will drive Britain into a war with the Soviet Union.

Quite a lot of the book is devoted to clearing away matters concerning Communist cells and British politicians, before police Detective Inspector Manciple makes an arrest (actually his second one, but this one sticks).  The rest of the novel concerns the trial of the arrested person, with Charles trying to find the evidence that will secure a case against the individual he believes actually to be guilty.

Fatality in Fleet Street has a broader canvas than both Crime in Kensington and The Perfect Alibi, the two other Venables detective novels I have read (I have never read Death of a Queen, a mystery set in a fictional Balkan kingdom, alluded to in The Perfect Alibi), but I think I preferred the guest house and village settings of Kensington and Alibi. In Fatality I wasn't as interested in the mild press and political satire and the trial (influenced by Sayers' Clouds of Witness, perhaps?).

Still there is characteristic Sprigg wit here.  I especially liked Venables' interview with a mysteries-avid landlady:

"Give me blood," said Mrs. Tremlow, buttering a thick slice of bread.  "Give me action; and give me love.  Say what you like, none of them ever comes up to Edgar Wallace, not for real thrillers."

Sprigg manages what I think is an original twist in the mystery plot, though the reader is never made privy to a key clue.

There are twelve press suspects, as well as Communist cell members and British politicians (including even the prime minister), but only six or seven of the press characters make an impression.  There is a native Chinese correspondent who speaks in cryptic Eastern proverbs, but he does this ironically.  Miranda Jameson, Lord Carpenter's wife and a certain designing clerical worker are women characters whom Sprigg portrays well, better than most of the men, in fact.

The events in Fatality in Fleet Street are moved up five years from the then present day to 1938 (not, I believe, 1937, as is stated on the back of the book).  I had assumed Crime in Kensington takes place in 1933, or are we to understand now that Crime in Kensington takes place in 1938 too, since several times people refer to events in that earlier novel as if they have taken place quite recently?

I found this all a little odd, but I assume that Sprigg felt the events concerning the Soviet Union would be more realistic in 1938.  Sprigg tells us that Russia's "Twelve Year Plan" has been a great economic success and that "Stalin and his like had given place to rulers gentler in political methods." Didn't quite work out that way in real life!  Sprigg himself was soon to become a defender of Stalin's political methods, which tragically did not become gentler.

Certainly if you like classic English mysteries you should give Fatality in Fleet Street a look.  I hope the other Charles Venables mysteries (along with Sprigg's non-series criminous works) will be reprinted as well.  Sprigg's first six detective novels are of interest as Sayers-influenced mysteries (and Dorothy L. Sayers herself lavished great praise on two of Sprigg's books).  The last novel, an expose of spiritualism, is quite a bit grimmer, reflecting, I think, Sprigg's post-conversion mindset. It was posthumously published, after Sprigg's untimely death in Spain, at the age of twenty-nine.

See also this post, on Sprigg's "lost" short stories.
Posted by The Passing Tramp at 1:32 PM