Churning It Out: Fifty Years in the Fiction Factory The Working Life of Herbert Allingham (2012), by Julia Jones

Today Herbert Allingham (1867-1936) is known, if at all, as the father of Margery Allingham (1904-1966), one of the four (maybe five) women writers from the Golden Age of detection crowned Queens of Crime.  But for half a century, from the 1880s to the 1930s, Herbert Allingham had a fascinating career in entertainment all of his own, amazingly preserved through the efforts of Margery Allingham, her younger sister Joyce and Margery Allingham biographer and authority on all things Allingham, Julia Jones, Jones also is the author of the book under review here, Fifty Years in the Fiction Factory: The Working Life of Herbert Allingham (2012), a compelling and important work of English literary history over five decades that deserves a wide readership among both fans and scholars of popular genre fiction. 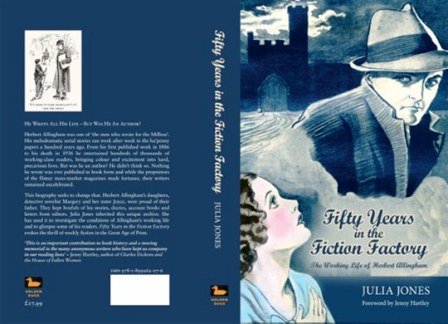 When one is a writer who writes about writers, one lives for finding caches of personal papers by one's subjects.  Very late in the day when writing Masters of the "Humdrum" Mystery, I gained access to a rich correspondence exchanged between Alfred Walter Stewart (J. J. Connington) and Rupert Thomas Gould.  When writing Clues and Corpses, I gained access to Todd Downing family letters, located and transcribed by Charles Rzepka, from which I was able to extract considerable interesting information.

Julia Jones was close to Margery Allingham's younger sister, Joyce, and inherited from her at her death in 2003 sixteen boxes of material from her father, Herbert Allingham, from which Jones was able to identity ninety-eight full-length picture paper serials "published at least 299 times in various formats."  Writes Jones: "Over many years Allingham's words touched very many lives, however fleetingly."

Yet literary history has tended to be a "trickle-down" discipline.  From the period between WW1 and WW2 scholars used to restrict themselves to studying highbrow authors like James Joyce and Virginia Woolf.  Nowadays we deign to look even at "middlebrow" (or perhaps no brow) crime fiction, although even here, ironically, we see a hierarchy, even a canon.

Raymond Chandler and Dashiell Hammett, American hard-boiled authors, are honored as higher literary writers who have produced serious crime fiction, works that transcend the genre, to use that threadbare phrase.  The Crime Queens Dorothy L. Sayers, Margery Allingham and Ngaio Marsh (sometimes Josephine Tey), key figures in the novel of manners English school of crime fiction, have their supporters as well, despite some carping from the hard-boiled admirers traditionally, who dismiss the ladies as classist and conservative.

Agatha Christie gets attention as well, largely because of her great sales (though often she is concomitantly disparaged as an author of "mere puzzles" of no literary distinction).

Yet the thriller writer Edgar Wallace, for example, who in the 1920s and 1930s racked up many more actual book sales than even Agatha Christie (who like most true detective fiction writers sold more to rental libraries in those days), is practically a non-person even in most mystery genre histories.

In his day Wallace often was dismissed, with unabashed class condescension, as a writer of cheap thrills who appealed only to clerks, mechanics, shopgirls and house servants.  It was ratiocinative detective fiction, even before the literary movement within the mystery genre took form, that was hailed as more respectable, because it appealed to the "educated classes."

Now, let's turn to Herbert Allingham. Critics who see Cecil John Charles Street, one of my Masters, who wrote over 140 mystery novels, and Edgar Wallace, author of scores of thrillers, as beneath notice, surely haven't a glance to spare at an anonymously published penny paper serialist. Surely this is the definition of literally "disposable" literature.

Fortunately there was Margery and Joyce Allingham, who preserved their father's fantastic trove of serial literature, which spanned a variety of picture papers over many decades, and there is Julia Jones, who has now produced a book from it.

As Julia Jones notes, "the vast majority of working-class readers in the Great Age of Print (and working class readers were the cast majority)" who made up Herbert Allingham's readership "read newspapers and disposable serial fiction....[Allingham's] archive offers us an insider's view of a truly popular art form."

I think this is a very fair point.  Learning more about Herbert Allingham's body of work will tell us more about his very wide readership and thus more about English society at that time.

With Allingham, Jones counters some previous writers who have looked at mass literary culture: Marxist critics Theodore Adorno and Max Horkheimer as well as George Orwell, who in his 1940 essay Boys' Weeklies, writes Jones, "presented writing for the mass-market as cultural brainwashing for the masses."  Turning to Allingham's work, Jones asks: "Was he part of a capitalist conspiracy to keep the common people quiet whilst the elite manipulated the situation to their own advantage?"

Jones makes a good case that the serials Allingham produced were more nuanced than critics have credited the form with being and that Allingham's readers were not mere cultural automatons, zombies of that old voodoo capitalism, but rather retained "their right to individual discussion and response."

Jones recognizes that today we must work hard to try to reach the imaginative world of the working-class reader of eighty, ninety, a hundred years ago.

"Not only are we reading at the wrong speed and in the wrong place to re-capture the original readers' enjoyment," she pointedly writes. "But we are also living the wrong lives."

Jones also goes into great detail about the serials themselves.  This is the heart of the book, and it beats strongly.  Allingham wrote a bewildering number of serials: school stories (Barrington's Fag), romance stories (Life for Love), adventure/thriller stories (A Devil of  a Woman). As "Mab," he even wrote a women's gossip column.  Allingham's mastery of this material, which must have seemed overwhelming at first--and second and maybe third--blush, is impressive.

There is so much material that one cannot of course detail it all, but let me pluck out the tale of Plucky Polly Perkins (subtitled "a story of Pathos, Fun, and Adventure, with a bit of Love-making Thrown In"), "one of Allingham's most popular creations...reprinted at least five times during his life."

"Polly and her brother and sister are the children of artistic, middle-class parents," writes Jones, but when the story begins "the children have been orphaned and face destitution."  Polly invests their modest legacies in a sweet shop and from there continuously--and pluckily--defeats the obnoxious authority figures who get in her way.  Polly is decidedly "left-of-centre," writes Jones.  "She routs a Major General  slaps a policeman who harasses her for a kiss and, when the workpeople go out on strike, she proves equally able to stand up to a bullying mill-owner or an incensed lynch mob."

Jones notes that typically in his serials social problems are displaced on the middle class or even the gentry; in that way working class readers could identify with the problems in the stories without having them hit too directly. As she puts it, when discussing Allingham's serial She Sinned for Her Children/For the Love of Her Bairns: "In Allingham's story suffering and struggle are transposed into the idiom of another class....Strong emotional involvement is possible but so too is escapism."

A perennial theme, which strongly resonated with working class readers, is the loss of home and children due to the machinations of unscrupulous connivers (see for example, Driven from Home and Mother Love). "The individual incidents and monstrous villains in Allingham's fiction might qualify then to be described as 'sensational shockers' but what is truly shocking," notes Jones incisively, "is the accuracy with which Allingham's serials depict a world where everything conspires against the attainment of this simple human dream of a home."

Working class characters, like Babs, the "gallant little cockney girl" in Human Nature, are treated sympathetically as resourceful and admirable types who "can cope in situations where the more refined hero or heroine is at a loss."  Scornful satire is reserved for the rich and privileged: "Certain professions are beyond the pale. Millionaire financiers are rarely to be trusted; lawyers are viewed with suspicion; prison warders and policemen are presented with unremitting dislike."

For those--and there should be many--interested in Margery Allingham, she definitely makes memorable appearances in the narrative. The book is chronologically ordered around Herbert Allingham's working life, but Jones brings personal details into into the narrative. There is some interesting detail as well about Margery's brother Philip, who published his own book, Cheapjack, highly praised and then forgotten, which Jones' publishing house Golden Duck has reprinted.  I found the passages on Herbert Allingham's sudden decline and death, after a lifetime of such prolific scribbling, quite moving.

Additionally, Fiction Factory is a quite attractively designed book, with illustrations from the serials themselves, very appropriately illustrating chapter themes.  This is a tremendously enjoyable and informative book that both Margery Allingham fans and those interested in English literary history should find makes quite rewarding reading.

Some additional reviews of this fine book here, here, here, here.  For more on Jones' 2006 thesis version of the book, Family Fictions, see here.
Posted by The Passing Tramp at 6:00 PM