Frank Gruber (1904-1969) was one of the great pulp fiction writers of the twentieth century. The Frank Gruber webpage over at thrillingdetective.com lists over one hundred stories by him, as well as more than thirty novels (he also wrote western tales).  He obviously had a quite a work ethic!

Often Gruber's tales revolve around interesting depictions of different sorts of employment.  His longest crime series was the Johnny Fletcher and Sam Cragg series of novels, fourteen of which appeared between 1949 and 1964 (a dozen of these in the 1940s, by far his most productive decade as a crime writer).

This series, about two guys who are constantly on the make for big moneymaking chances and who just happen to constantly encounter murder along the way, probably influenced Craig Rice's own excellent Bingo and Handsome series (The Sunday Pigeon Murders, 1942, The Thursday Turkey Murders, 1943, The April Robin Murders, 1958). 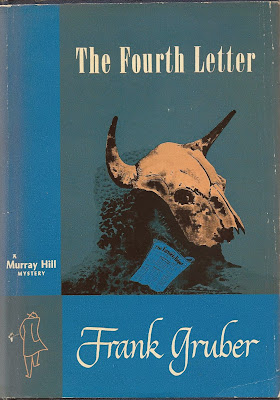 Aside from the presence of "fourth" in the titles of both novels, mail plays a key role in both books. Given the close proximity of their years of publication, I think it not unlikely that there was a connection, whether conscious or not, on Rice's part.

I quite enjoyed The Fourth Letter, but more for the milieu than the mystery per se.  Frank Gruber was born on a farm in Elmer Township (population 151 in 2010) in Minnesota's iron triangle, about an hour northwest of Duluth, and judging by The Fourth Letter, he probably was glad to get out of there. His view of small town life is definitely akin to that of Sinclair Lewis in Main Street (1920).

The novel details newsman Tom Haggerty's relocation from Chicago to little Elmhurst, Iowa, where he has accepted a job as circulation manager for the rural newspaper The Farmer's Helper.  Within twenty-four hours of his first day at work, he is falling in love with one of the newspaper secretaries, who happens to be the most beautiful "girl" in Elmhurst, and coping with a murder on the premises, for which he becomes the chief suspect of the stupid and unethical local police.

The mystery is honestly worked out and interesting enough, but, as stated above, it is Gruber's depiction of life in a small Midwestern, mid-century American town and the workings of a rural newspaper that most interested me.  The author also has a good light touch with character and dialogue.  At a bit under 60,000 words, Letter is quite a short book and it won't change your life, but it's a good, quick mystery read.  I will definitely seek out more of Frank Gruber's writing.
Posted by The Passing Tramp at 7:54 PM