"I'm assuming that a competent private investigator can take care of the matter, for a reasonable fee, and without involving us in any Sam Spade nonsense." 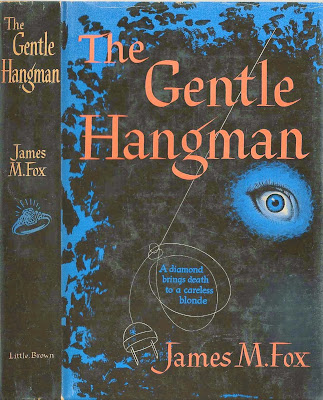 In the New York Times Book Review in 1950 Anthony Boucher praised James M. Fox's The Gentle Hangman for its convincing setting in Hollywood, "which Mr. Fox knows down to its last hand-painted cravat," and its "plot of tremendous intricacy" (involving "radio giveaways, labor racketeering, and a touch or two of sexual aberration").

Boucher also noted that in The Gentle Hangman there was "not a single turn of phrase or thought to indicate that [Fox] began writing in English only a dozen years ago" and that the author "has taken two of the prime American patterns, the Private Eye and the Bright Young Couple, and fused them delightfully so as to avoid either the excess toughness of the first or the cloying cuteness of the second."

Myself I found there were some good points to The Gentle Hangman, but I'm afraid I can't be nearly so positive about the book as Anthony Boucher.

What is the book about?  Well, as the jacket says, "a diamond brings death to a careless blonde" (I guess diamonds aren't a girl's best friend, eh?).  It seems that a woman tasked on a sort of radio game show with selling a diamond ring on the street for $10 instead absconded with it.  PI Johnny Marshall in turn is tasked with finding this blonde, and he does--dead, "gently" hanged from a bedpost.  By the by, the events take place at Christmas time, so technically this novel is a Christmas mystery, if only tepidly so.

Anyway, thus is launched a plot of, as Boucher wrote, "tremendous intricacy."  The problem is it doesn't uncoil nearly as well as it should.  At the end I wasn't totally clear on just who was who and which parts of which stories were true and which false.  Fox may have been a fan of R. Austin Freeman and Dorothy L. Sayers (see my previous post), but those two authors were much better plot untanglers.

Johnny Marshall is a smart guy.  He's Cornell '39, apparently, quotes Robert Burns and uses big words (a man displays "a couple of prominent, heavily auriferous eyeteeth"--I had to look up that word "auriferous").  He has a good descriptive sense (there are some vivid pictures of LA) and slings narrative one-liners in the classic tough guy tradition:

"She offered us a smile you could have bottled and sold for weed killer."

"It was small enough for a Carmelite nun to develop claustrophobia."

"The Mexican waitress looked like a high-school girl recently recruited into a life of sin; she didn't use quite a full ounce of mascara, and she sported a set of falsies big enough to bounce a truck off."

I found the police predictably unlikable, even though they didn't actually beat up our hero, as so often happens in Raymond Chandler's books.  Instead they beat up a cheap crook, in a lengthy and quite repulsive police interrogation scene.  Johnny seemed to disapprove in a general way, although he primarily expressed contempt for the hood (noting his "halitosis" for example).*

*(In the front matter of the novel we find this disclaimer: "This story is fiction....Apologies are tendered to Sheriff Eugene Biscailuz of Los Angeles County, and to his staff, under whose capable administration such goings-on as these could not possibly have occurred."  Well, that's certainly reassuring.)

In his page on the Johnny and Suzy Marshall series over at thrilling detective.com, Kevin Burton Smith refers to Suzy's "Kiss me, I'm stupid" ditziness, which he finds grating.  I don't know that I would call Suzy a ditz in this book, but she does ask a lot of "but why?" questions, which does get old by the end.  She is clearly the Watson figure in this relationship (Johnny even mentions Holmes and Watson several times).

Especially tiresome is Johnny's seemingly endless series of "cute" pet names for Suzy.  I made a list:

I was wondering whether Fox used a random generator for these. Let's try some others: cherry bun, honey pie, sugar doll, angel lamb--hmm, I'd better stop here. Johnny also refers to Suzy as "the little woman."  You definitely get the sense that the war is over and women are expected to get back inside the home, cooking, cleaning and cooing over their he-men.

Personally, I wish this series had continued until the 1960s, when Suzy might have read Betty Friedan and come up with her own pet name for Johnny: smug bastard.

The only other significant woman character in the novel is a female professional described as such by Johnny:

It wore a Kelly-green silk blouse with matching Paisley scarf and pure white gabardine slacks under the mink, on a body like a man's: tall, broad-shouldered and slender-hipped, the chest as flat as a billboard, the ankles thick and heavy over size-ten feet in low-heeled English saddle brogues. Paradoxically, the over-all effect achieved was somehow feminine and seductive.

Miss Luanna Bouquette is soon out to seduce Johnny, assuring him that she's not one "one of those queers--you know, the ones who like little girls and things."  Johnny later sums her up as a "nymphomaniac."

"Nylons they wear, yet, and they haven't changed a particle in ten thousand years--they still like to see blood so much they even paint their fingernails to preserve the illusion" (this after Suzy can't "suppress the pleasurable inflection" from her voice after Johnny beats two hoods to pulps).

"I was satisfied that there could be only one answer, but it was an answer based on cold, sordid logic of a kind no woman could be expected to appreciate....It simply wasn't the sort of deal that lent itself to argument from an emotional angle, such as a woman by nature always must take" (this on why he's not explaining things to Suzy).

As far as minorities go, a bucktoothed Japanese character is referred to by Suzy and Johnny as "the Jap" (perhaps not so surprising five years after WW2) and Johnny refers to a bulging-eyed "old Negro" diner worker as "the colored boy."  Blah.

Reading The Gentle Hangman, I couldn't help thinking of Ross Macdonald's classic detective novel The Ivory Grin (1952), which is light years ahead in terms of the author's handling of social relations and sympathy and his ability to unravel an extremely complex plot coherently.  Still, an Ivory Grin doesn't flash at one every day.  I might yet give another Fox novel a try next year.  At the very least it should make an interesting lesson in literary sociology.
Posted by The Passing Tramp at 1:16 PM