Listen to Your Mother (s) 2: Women Writers and Detectives in Nineteenth-Century Crime Fiction: The Mothers of the Mystery Genre (2010), by Lucy Sussex, Part 1

Lucy Sussex's Women Writers and Detectives in Nineteenth-Century Crime Fiction: The Mothers of the Mystery Genre (2010) is one of the most important scholarly accounts of overlooked mystery fiction by women writers, an area of study that has attracted much interest from academia in the last twenty years. The traditional histories of detective fiction, while giving recognition to such women as the Americans Anna Katharine Green, and Mary Roberts Rinehart and the celebrated English Crime Queens, scanted nineteenth-century female crime writers, according to Sussex:

The popular view cites Poe in the 1840s, as the "first" detective writer, of classic short stories.  He was followed by Wilkie Collins with The Woman in White (1860) and The Moonstone (1868), a mystery and a detective novel respectively.  In the late 1880s appeared Conan Doyle and his Sherlock Holmes tales--just at the time when detective fiction became identifiable as a popular and wide-spread publishing category....

This popular history of crime fiction's origins, with its 20-year intervals between the three canonical, founding fathers, is a progression that resembles three generations, a genealogy with no apparent maternal input....


Sussex notes that more specialist studies often add other male names, such as William Godwin (Caleb Williams, 1794), Emile Gaboriau and Fergus Hume (The Mystery of a Hansom Cab, 1886, and scores of other, now largely forgotten, mysteries), along with Anna Katharine Green, routinely pronounced to have been the first woman to write a detective novel (The Leavenworth Case, 1878).

Sure enough, when one looks at Howard Haycraft's Murder for Pleasure (1941)--for three decades, until the publication of Julian Symons' Bloody Murder (1972), the primary popular mystery genre history--we find, after a discussion by Haycraft of Edgar Allan Poe in Chapter One, a profile of Gaboriau, Collins and Charles Dickens in Chapter Two ("Gaboriau, Collins, Dickens.  Each contributed something toward fictional detection. Jointly, they kept the form alive: saved the theme, perhaps, from premature extinction."), followed by a third chapter devoted to the adventures of Arthur Conan Doyle and a certain Sherlock Holmes.

Fergus Hume makes a cameo appearance in Haycraft's Chapter Four, on account of, naturally, his massively successful The Mystery of a Hansom Cab, but Haycraft peremptorily dismisses the novel as a "shoddy pot-boiler....[s]carcely readable today" that "is mentioned here for its historical interest only."

Nary a woman is sighted in the pages of Murder for Pleasure until the formidable Baroness Orczy pops up on page 70, for her Man in the Corner tales.  Finally Anna Katharine Green crashes the scene on page 83, to be received with somewhat more welcome than Hume.  Haycraft allows that Green's The Leavenworth Case is "one of the true historical milestones of the genre" with a "remarkably cogent plot," despite what he considers "some incredibly bad writing."

For his part, Julian Symons in Bloody Murder introduces William Godwin into his Poe chapter, then moves on to discuss Dickens, Collins and Gaboriau.  He also includes a discussion of Charles Felix's The Notting Hill Mystery (1865; serialized 1862-1863), declaring that "there is no doubt" it was "the first detective novel."

This contention, incidentally, has been contested by those who make the case for Mary Elizabeth Braddon's The Trail of the Serpent (1860/1)--see, for example, Anne-Marie Beller, who in her excellent Mary Elizabeth Braddon Companion (2012), edited by Elizabeth Foxwell, has condemned Symons for having "notoriously overlooked female contributions to the emerging mystery genre." 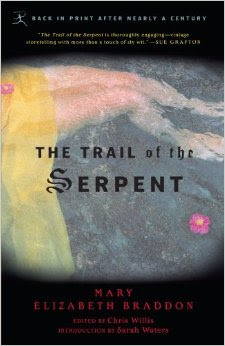 Symons also looks at the contributions to crime fiction of the great Victorian author Sherida Le Fanu, whom he calls "a romantic writer in the Gothic mode, working half a century after the Gothic novel had faded."

As I discussed in my previous post, Symons' omission of any discussion of women Victorian sensation novelists as such seems curious, when one considers that, from the evidence of his own book, he clearly had read Alma Murch's The Development of the Detective Novel (1958), wherein Murch devotes an entire chapter to the subject. In Bloody Murder Symons allows that Murch's book "contains a lot of detailed and valuable materiel about nineteenth-century crime fiction, not easily found elsewhere."

However, when Symons takes time to note that Mark Twain's Life on the Mississippi "contains a chapter about fingerprints as a means of identification," but passes over Braddon and Wood, both of whom were praised by Murch for their contributions to developing detective fiction, one can only conclude some value judgments about basic literary worth were being made.

Yet Symons also finds space for a Major Arthur Griffiths, who wrote some "crime stories and historical romances" that "include detectives of sorts," but "are fifth-rate thrillers redeemed only by the writer's knowledge of criminal habits."  How can Major Griffiths merit mention, but neither Braddon nor Wood nor, for that matter, Elizabeth Gaskell, whose "The Squire's Story" Murch calls "a neat little tale of crime and detection, though presented as social commentary, thus escaping the stigma of 'sensationalism'"?


Fergus Hume again receives notice, this time more positively, Symons allowing that his Hansom Cab is a "reasonably good imitation of Gaboriau, contributing some convincing scenes of low life." Anna Katharine Green comes off much more poorly, Symons being hard-pressed to explain the popularity of her Leavenworth Case, beyond suggesting that this "was perhaps partly due to her sex, partly because of the familiarity she showed with legal and criminal matters (her father was a lawyer), and partly--one is bound to think--because there were so few detective novels being written."

Ouch!  Well, in Mothers Lucy Sussex definitely has more to say about such assumptions, as I will be discussing in Part 3.
Posted by The Passing Tramp at 3:29 PM