Cottage to Let is an enjoyable British mystery thriller directed by Anthony Asquith, a prominent British film director best known for his adaptations of plays, including Pygmalion (1938), The Winslow Boy (1948), The Browning Version (1951) and The Importance of Being Earnest (1952). 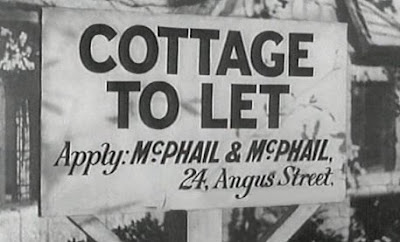 Cottage to Let is very much a light crime thriller in the manner of Edgar Wallace, but it is very well done.  Set, of course, during the Second World War, in the environs of a country house, it concerns one of those gentleman genius amateur scientists you read about in British mystery fiction of the era, who in this case has invented a bombsight that is not only greatly valued by the British government, but fervently desired by a den of Nazi spies.  The Nazis are out at any cost to grab the plans, or the formula, or, hell, let's just call it, as Alfred Hitchcock did, the MacGuffin.

The scientist, John Barrington, is played by Leslie Banks, an actor with quite a respectable mystery/suspense genre pedigree, including the suspense classic The Most Dangerous Game (1932); Hitchock's original version of The Man who Knew too Much (1934)--the one with Peter Lorre; The Murder Party (1935); Jamaica Inn (1939) (Hitchcock again); The Arsenal Stadium Mystery (1939); and Haunted Honeymoon (1940), the film adaptation of Dorothy L. Sayers's Busman's Honeymoon (1937) (though it's American Robert Montgomery who plays Lord Peter Wimsey).


Banks is good in this, although others in the cast have more colorful roles.  Who are the others?  Well there's John Barrington's scatty but very socially active wife, humorously played by Jeanne De Casalis; their lovely daughter, Helen, played by Carla Lehmann (though you might be forgiven for thinking it's Carole Lombard); Barrington's bespectacled young assistant, Alan Trently (Michael Wilding); and a trio of guests, originally all meant to stay at the Barringtons' cottage to let: the enigmatic Charles Dimble (Alastair Sim); a convalescent bomber pilot, Flt.-Lieut. Perry (John Mills); and a pugnacious adolescent Cockney evacuee named Ronald (George Cole).  Among this cast, there may be some individuals who are up to no good--but who???

As stated, this is an enjoyable film, with good acting, a clever script, some charming bits of humor, a little romance and a suitably thrilling ending.  Sim is fun as always of course, but it's really George Cole, the Cockney Sherlock Holmes enthusiast, who walks off with the film. (Cole, incidentally, just celebrated his ninetieth birthday this year.)  Also especially notable is John Mills, who lends the film some dramatic heft.  You might at times mistake Cottage to Let for an early Hitchcock movie like Young and Innocent (1937).  Evidently the film is public domain and can be viewed on youtube; there's also a good copy of it available on DVD.