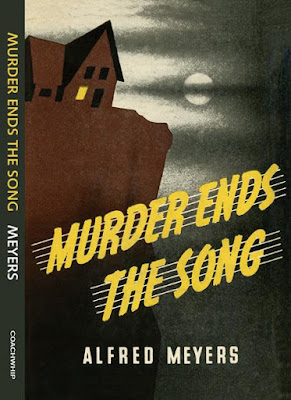 Coachwhip has reprinted Alfred Meyers' Murder Ends the Song (1941), a detective novel I reviewed, very favorably, back in March 2013. Intriguingly similar in some ways to Ngaio Marsh's penultimate murder mystery, Photo-Finish (1980), published four decades after Murder Ends the Song, Meyers' sole known detective novel conveys the artistic world of opera while at the same time providing an intricate mystery puzzle about the murder of a coloratura soprano.

In Marsh's novel, the murder takes place at a mansion on a millionaire's private island in New Zealand, where the hateful operatic soprano and her extended entourage have been stranded!

In Meyers' novel, the murder takes place in Oregon at Lucifer's Pride, a hulking barn of a decrepit old mansion, built above the Columbia River Gorge, where a hateful opera soprano, Marina Grazie, and her extended entourage have been stranded!  Prior to their murders, both sopranos had been receiving threatening messages.

Had Marsh ever read Murder Ends the Song? Interestingly, PD James' The Skull Beneath the Skin, published two years after Marsh's novel, rather resembles the plot lines of Photo-Finish and Murder Ends the Song, although the murder victim in the James novel is a hateful actress, rather than an opera singer.  She and her entourage are on an old mansion on a island, where they have been--you guessed it--stranded! Additionally, the hateful murdered actress had been receiving threatening messages before her death.  Maybe these trio of novels should be published as a three-volume omnibus: The Diva Murders.

As befits a novel published in the heyday of Ellery Queen and his followers, Murder Ends the Song is chock-full of graphically-presented material elements (puzzle pieces, if you will), including thee illustrations, a floor plan, a list of documents and, near the end of the tale, a tabulation of clues.  The novel should appeal to puzzle fans, as well as those who enjoy the sophisticated "manners mystery" style of the Crime Queens and Detection Deans. Additionally there is unexpected emotional resonance in the ending.  It's only too bad that Murder Ends the Song never had an encore.

Alfred Meyers (1906-1963) grew up in La Grande Oregon, where his German Catholic family was harassed by the town's highly active Ku Klux Klan klavern.  In the 1920s Meyers attended Notre Dame University, where he received an MA in English and sang bass in the college's highly-respected Glee Club. After his bank cashier father's death in 1937, Meyers moved to San Francisco, where he sang in the chorus of the city's opera and found time to write a single mystery novel.

He later wrote one of the essays in the true crime anthology San Francisco Murders (1947) and served as the first treasurer of the northern California chapter of the Mystery Writers of America.  He was friends with Anthony Boucher and Lenore Glen Offord, but, unlike them, he has faded into obscurity--a state of neglect that I hope the reprinting of his novel will rectify!

Incidentally, while researching Meyers' life I found out that, although his mother was Catholic, her original ancestry was Quaker, going back to Pennsylvania at the time of William Penn.  In fact, way back in 1720, slightly under 300 years ago, a sister of his six great grandfather, John Palmer, wed my eight great grandfather Richard Buffington.  But I assure that this ancient family connection has not biased me unduly in Meyers' favor.  I quite enjoyed Murder Ends the Song before I knew anything about this!