The Spectrum of English Murder (2015), by Curtis Evans; Plus, the Punshon Project 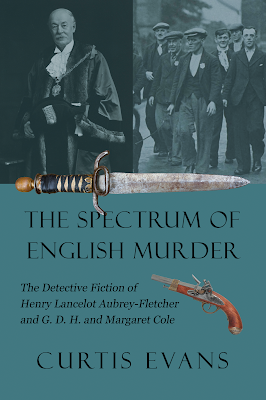 Although Aubrey-Fletcher was a Tory and a member of the country's traditional landed elite, his detective fiction offers searching and sometimes searing criticism of myriad aspects of British society.  A pioneer of both the police procedural and the crime novel (though no mean puzzler when he chose to be), Aubrey-Fletcher was an important figure in the movement to transform the classical tale of detection.

As a sideline from their serious writing on politics and economics, the Coles produced a significant body of detective fiction, much of it mocking conservative British values. Although less formally innovative in their mystery writing than Aubrey-Fletcher, the husband and wife were exceptional within the genre at this time for their employment of leftist-tinged satire and farce. 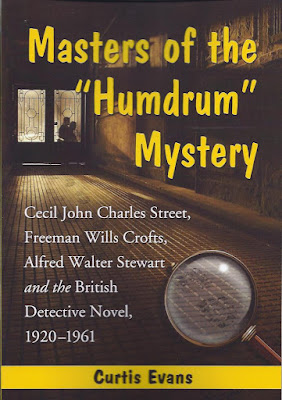 Following the path laid in 2012 with my book Masters of the "Humdrum" Mystery, which studies the so-called "Humdrum" detective fiction--so styled because of its narrative focus on carefully structured puzzle plots--of Cecil John Charles Street (John Rhode/Miles Burton), Freeman Wills Crofts and Alfred Walter Stewart (JJ Connington), The Spectrum of English Murder analyzes the work of three additional important British Golden Age mystery writers. All six authors, incidentally, were original members of the Detection Club and some of their work gets notice in Martin Edwards' recently published book on the Detection Club between the two world wars, The Golden Age of Murder.

Additionally, I am near completion of my latest round of introductions to reprints of the Bobby Owen detective novels of another Golden Age English mystery writer and Detection Club member, E. R. Punshon.  These reprint editions are published by Dean Street Press, who earlier this year reprinted the two Golden Age John Christmas mysteries of original Detection Club member Ianthe Jerrold, for which I also wrote introductions.

When the Punshon project is completed, I likely will have written about him some 35,000 words, as each individual introduction in the series is about 1000 words and there are 35 Bobby Owen detective novels. This 35,000 words will be about the same length of my individual chapters on Crofts, Stewart, Aubrey-Fletcher and the Coles.  I am pleased that the Punshon project not only makes a notable and accomplished Golden Age mystery writer more accessible to classic mystery fans, but that it has allowed me a platform on which to discuss the fascinating mysteries of Golden Age murder fiction.
Posted by The Passing Tramp at 2:42 PM