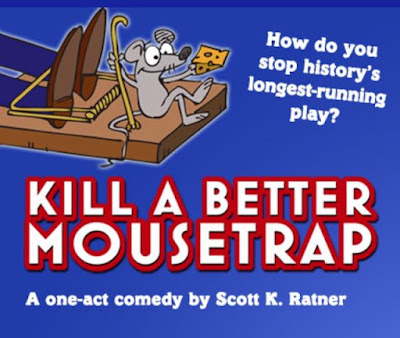 Ah, then I take it you're not much of an Agatha Christie fan.

Not much of--?  I love Agatha Christie!!  Love!!  She was amazing!!  The greatest mystery writer of the Golden Age.  Well, maybe second to John Dickson Carr, but it was close. Very close!

Oh yes, The Mousetrap!....All the superficial trimmings of a great Christie work, with none of the ingenuity....Cardboard characters, cliched situations, stilted humor, and a "surprise twist" that anyone could see coming a mile off--

Oh, I couldn't tell you that! 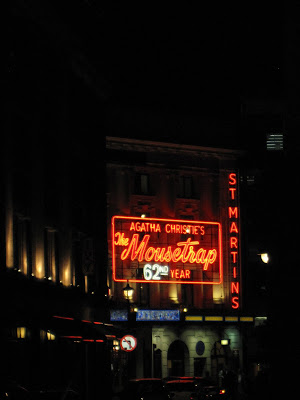 Agatha Christie's mystery thriller play The Mousetrap opened in London in 1952 and has been catching audiences ever since, making it the longest running play in history.  It is renowned for its much-hyped "twist" ending, which audiences are requested not to reveal.

And this is no idle request.  Back in 2010, Agatha Christie's grandson, Matthew Prichard, complained that, in Wikipedia's entry on the play, the twist was detailed in the summary of the play's plot. (It's still there, five year later, so exercise due discretion if you read the Wikipedia entry--don't say I didn't warn you!)

If you want my opinion of the twist--well, perhaps I'd better not say anything....

Rest assured that in his droll one-act 2011 play, Kill a Better Mousetrap, Scott K. Ratner does not reveal the ending of Christie's famous play, but he certainly lets the play in for an amusing critical drubbing, by means of the ravings to an analyst made by a seriously neurotic mystery fan, one Miles Edward Merbinoe.

Ratner's play is both an affectionate and deeply informed homage to the Queen of Crime's unique and enduring literary genius and a hilarious portrayal of an obsessive mystery lover's attempt to deal with his intense disappointment with one of her most famous works.

Filled with rich observations of Christie's writing, snappy one-liners and even its own share of twists, Kill a Better Mousetrap is a hugely enjoyable piece of work.  It has been performed over the last several years in California and I hope it sees performances elsewhere in the future.  If you get a chance to see it, however, just don't reveal the ending!
Posted by The Passing Tramp at 1:53 AM