P. G. Wodehouse is known to have been a great fan of detective fiction, and one can certainly see evidence of of Wodehouse's criminal whimsy in The Code of the Woosters, the author's 1938 novel saga of the further antics of his most renowned series characters, the amiable ass Bertie Wooster and his profoundly capable valet, Jeeves.  Sprinkled throughout the Wodehouse novel are general references to detective and thriller fiction as well as a very specific reference to a 1937 mystery by E. R. Punshon. (The credit for the latter discovery belongs to the late William A. S. Sarjeant, an admirer of both authors.)

The Code of the Woosters, as Bertie informs readers at the outset, tells the tale of "the sinister affair of Gussie Fink-Nottle, Madeline Bassett, old Pop Bassett, Stiffy Byng, the Rev. H. P. ("Stinker") Pinker, the eighteenth-century cow creamer, and the small, brown, leather-covered notebook."  There is, as this suggests, a lot going on in this novel! (Bertie actually left out the part about the policeman's helmet.)

When the novel was adapted for the 1990s Jeeves & Wooster television series, the scriptwriters, apparently finding the multiple plot threads too challenging to untangle simultaneously, actually divided the whole story into two episodes, with the first dealing with the affair of the cow creamer and the second addressing the matters of the small, brown, leather-covered notebook and the policeman's helmet.  Mystery readers who like a twisting plot, The Code of the Woosters is a book for you!

Although of course the book is farcical, there actually is quite a bit of country house criminality going on in it. And throughout the novel knowing allusions are made to detective stories and thrillers.

Extorted by his Aunt Dahlia into snitching from a rival silver collector, Sir Watkyn Bassett, an eighteenth-century cow creamer to which she feels her husband is morally entitled, Bertie makes his way to Bassett's country estate, Totleigh Towers, to commit the criminous deed.

There he encounters in addition to Bassett--who, before he retired as a magistrate, fined Bertie for snatching, while on a drunken lark, a policeman's helmet--one Roderick Spode, leader of a fascist organization known as the Black Shorts. (By the time Spode formed his group, you see, all the black shirts had already been taken by British fascist leader Oswald Mosley, so Spode had to settle for shorts.)

Both men dislike, and are quite suspicious of, Bertie, causing him to reflect doubtfully:

I mean, imagine how some unfortunate Master Criminal would feel, on coming down to do a murder at the old Grange, if he found that not only was Sherlock Holmes putting in the weekend there, but Hercule Poirot, as well.

Soon he finds another party, Stephanie "Stiffy" Byng, Sir Watkyn's niece, extorting him to steal the cow creamer for her! Bertie finds the whole situation is getting dashed confusing, leading to this exchange with Jeeves:

"I think it would help if we did what they do in thrillers.  Do you ever read thrillers?"

"Well, there's always a bit where the detective, in order to clarify his thoughts, writes down a list of suspects, motives, times when, alibis, clues and what not. Let us try this plan. Take pencil and paper, Jeeves, and we will assemble the facts."

This is, indeed, something that is done in several E. R. Punshon detective novels from the period, and it's clear from further references made by Bertie that Wodehouse had read Punshon's Mystery of Mr. Jessop, published the year before in 1937. 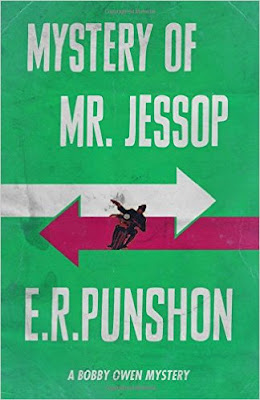 At one point in the novel, Bertie curls up with a good mystery:

A cheerful fire was burning in the grate, and to while away the time I pulled the armchair up and got out the mystery story I had brought with me from London.  As my researches in it had already shown me, it was a particularly good one, full of crisp clues and meaty murders, and I was soon absorbed.

This mystery is in fact Mystery of Mr. Jessop. Yet later in the novel, when Bertie is trying to retrieve the small, brown, leather-covered notebook that Siffy has swiped from Gussie Fink-Nottle, he finds inspiration to action in the pages of his mystery:

To give the brain a rest before having another go at the problem, I took up my goose-flesher again. And, by Jove, I hadn't read more than half a page when I uttered a cry.  I had come upon a significant passage.

"Jeeves," I said, addressing him as he entered a moment later, "I have come upon a significant passage."

The "significant passage" concerns a section of the book where a young woman's flat has been ransacked, by a person or persons unknown searching for "missing jewels" (actually a diamond necklace). Bertie quotes a portion of the book where the detective--called Postlethwaite by Wodehouse, but actually Punshon's Superintendent Ulyett--lectures "his pal" (actually his subordinate, Punshon's series sleuth, Detective-Sergeant Bobby Owen) about "the top of the cupboard" being "every woman's favourite hiding-place."  This all comes directly from a passage in Mystery of Mr. Jessop.

To Bertie it suggests an immediate course of action:

I eyed him keenly.

"You see the profound significance of that, Jeeves?"

"If I interpret your meaning aright, air, you are suggesting that Mr. Fink-Nottle's notebook may be concealed at the top of the cupboard in Miss Byng's apartment?

"Not 'may,' Jeeves, 'must.'  I don't see how it can be concealed anywhere else but.  That detective is no fool.  If he says a thing is so, it is so.  I have the utmost confidence in the fellow, and am prepared to follow his lead without question."

Of course not all goes as smoothly as Bertie naively expects, and he finds detective novels are not always quite the same as real life.

Another interesting similarity between the two novels has to do with the references to British politician Oswald Mosley's fascist Blackshirts, who in the mid-Thirties were involved during political demonstrations in violent street brawls with communists. Wodehouse's Roderick Spode and his Black Shorts clearly spoof Mosley and his gang.

"The trouble with you, Spode," Bertie lectures (once he has been supplied by Jeeves with a dirty secret on Spode that he can use to keep the obnoxious man in check):

is that just because you have succeeded in inducing a handful of half-wits to disfigure the London scene by going about in black shorts, you think you're someone.  You hear them shouting, "Heil, Spode!" and you imagine that it is the Voice of the People.  That is where you make your bloomer. What the Voice of the People is saying is: "Look at that frightful ass Spode swanking about in footer bags!  Did you ever in your puff see such a perfect perisher?"

In Mystery of Mr. Jessop E. R. Punshon satirically references the London brawls between fascists and communists, indicating that he holds totalitarian ideology in disdain.  He would have more to say on this subject the next year in his detective novel Dictator's Way, which appeared the same year as The Code of the Woosters.

Note: Both the Punshon novels mentioned above, as well as three others--Death Comes to Cambers, The Bath Mysteries and The Dusky Hour--will soon be reissued from Dean Street Press.  They will have introductions by me in which I further ruminate on the mystery writing of Mr. Punshon. As for Mr. Wodehouse, you should be reading him already!
Posted by The Passing Tramp at 10:41 AM