Lucy Beatrice Malleson published her first mystery novel, The Man Who Was London, in 1925, under the singular pen name J. Kilmeny Keith.  This was followed in 1927 with another Keith novel, The Sword of Harlequin, described as "less a detective novel than a psychological study." That same year Malleson also created the pseudonym for which she is best known: Anthony Gilbert.

Tragedy at Freyne, the first Gilbert novel, introduced amateur sleuth Scott Egerton, who would serve as Gilbert's series detective in ten novels, published between 1927 and 1935. (After dropping Egerton as a series character Malleson created the lawyer sleuth Anthony Crook, for whom she is best known.) In 1928 the second Anthony Gilbert novel, The Murder of Mrs. Davenport, appeared, followed by three more detective novels over the next two years: Death at Four Corners (1929), The Mystery of the Open Window (1929) and The Night of the Fog (1930).

So "Anthony Gilbert" was quite busy with her own books in 1929, when Annie Haynes died, leaving an unfinished mystery manuscript; but perhaps the fact that Gilbert published "only" one detective novel in 1930 is a pointer in favor of the theory that Gilbert took some time out to complete The Crystal Beads Murder.  Also in favor of Gilbert as the "culprit" is that, compared with Agatha Christie and A Fielding at this time, she was a relatively less established name in mystery.

We know also that Gilbert was unmarried and greatly involved in women's club life, a milieu that would have been familiar to Annie Haynes and her companion, the prominent feminist and philanthropist Ada Heather-Bigg.  Furthermore, the writing style of the later portion of The Crystal Beads Murder strikes me as similar to Gilbert's in her own books. In both there is a greater reliance on descriptive writing and a more prominent authorial voice.

Additionally, the phrase "flotsam and jetsam," used to refer to a bedraggled piece of humanity, pops up in the later portion of The Crystal Beads Murder; and this is a term and image that appears recurrently in Gilbert's own work.  Compare the use of the term in The Crystal Beads Murder with its use in Gilbert's The Long Shadow (1932), for example, and you should see what I mean: 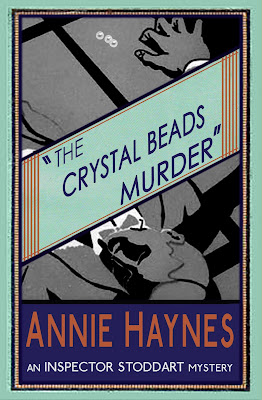 She was a kind-hearted woman and the slowly moving figure [note: a passing tramp!] appealed so eloquently as a bit of human flotsam and jetsam, drifting through the murk of an autumn morning, that she impulsively threw the window open and called to him as he passed.

Nobody knew who the old woman was; nobody ever asked.  Nobody cared.  She was part of the flotsam and jetsam flung up by life to end its days in Sullivan's Dwellings.

In both cases it is not merely the use of the phrase, but the sentiment behind it, the empathy for the downtrodden, that is notably similar.  This strong concern with the plight of society's unwanted is highly characteristic of Anthony Gilbert's work (including her revealing memoir, Three-a-Penny) and, I think it's fair to say, rather less characteristic of Golden Age mystery in general.

Conclusion: All right, guv, it's a fair cop!
Posted by The Passing Tramp at 6:18 PM