Are you happy?  If not, consult Mr. Parker Pyne.

By all means, if Hercule Poirot is not available.

When people praise Agatha Christie short story collections, Parker Pyne Investigates (1934) doesn't normally get a lot of mention, in my experience, but I think the book is both an entertaining collection in its own right and of interest for its relationship to Christie's vastly more famous Hercule Poirot canon.

Professionally, Parker Pyne is not a detective.  A portly, bald, benevolent-looking man in spectacles, Pyne retired from thirty-five years of work in a government office compiling statistics and went into the business of making people happy, for a fee.  "It is all so simple," he tells a client.  "Unhappiness can be classified under five main heads--no more, I assure you." 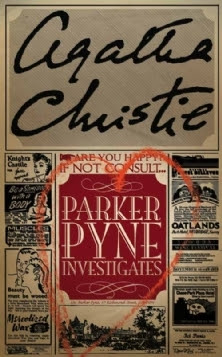 The first six Pyne tales, all titled "The Case of [something or other]," are very light, humorous pieces, all detailing how Mr. Pyne uses his wits and his organization to bring happiness into the lives of his various troubled clients.  The formula started to wear thin by the last two stories in this first cycle (the last tale, "The Case of the Rich Woman,"is truly bizarre), but the first four tales all have their points.

Only one of these early Pyne tales, "The Case of the Distressed Lady," involves crime in any way (unless you count Pyne's outrageous activities in "The Case of the Rich Woman"). The next six Pyne tales are a different matter, however. Pyne goes on vacation abroad and the stories take place in various scenic Continental European and Middle Eastern locales, to wit:

"Have You Got Everything You Want?" Paris to Stamboul aboard the Orient Express

"The Gate of Baghdad" Damascus to Baghdad through the Syrian Desert

"The House at Shiraz" Shiraz, Iran

"The Pearl of Price" Petra, Jordan

"The Oracle at Delphi" Delphi, Greece


These stories involve Parker Pyne in crime sleuthing: jewel theft in two stories, kidnapping in another, and unnatural death in a trio of tales.  Several of these tales have considerable ingenuity, especially "The Pearl of Price" and "The Gate of Baghdad." These two bafflers would have made fine cases for Poirot canon.

Of the last two tales, "Problem at Pollensa Bay" is a humorous human relationships tale and "The Regatta Mystery" is another clever jewel theft story.  The former takes place on the island of Majorca and the latter, a sort of locked room problem on a yacht, is set in Dartmouth, Devon, Pyne having finally made his way back to England. 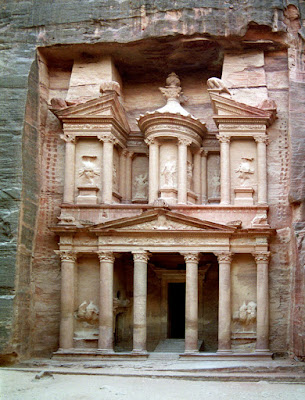 One point about these stories that struck me immediately is how they reflect Christie's travels with her noted archaeologist husband, Max Mallowan, and anticipate, in terms of "exotic" settings, several Poirot novels in the 1930s: Murder on the Orient Express (1934), Murder in Mesopotamia (1936), Death on the Nile (1937), Appointment with Death (1938). Indeed, as you can see above, one Pyne story even is called "Death in the Nile" (though it is much different from the novel).

Also, "The Regatta Mystery" began life as a Poirot short story.  I don't know why Christie later wrote a Parker Pyne version of it, but that is what she did.

But Parker Pyne and M. Poirot have even more in common than this.  Two characters associated with the Poirot canon--the Belgian's highly efficient secretary Miss Lemon and and his mystery-writer friend Mrs. Oliver--made their debuts in Parker Pyne stories. 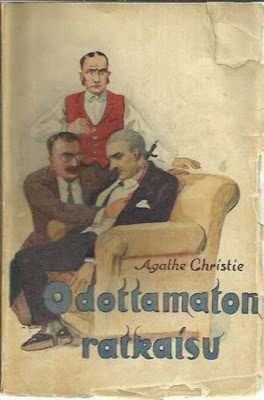 Miss Lemon is Parker Pyne's secretary (and highly efficient indeed), and Mrs. Oliver, though a bestselling mystery writer, likewise is employed as a cog in Parker Pyne's organization, albeit in a creative capacity.

Already by 1932 Mrs. Oliver has authored "forty-six successful works of fiction, all bestsellers in England and America, and freely translated in French, German, Italian, Hungarian, Finnish, Japanese and Abyssinian."

Mrs. Oliver seems at this time to have specialized in improbable Edgar Wallace style thrillers. Apparently she has not yet created her celebrated Finish detective, Sven Hjerson.  Must have been her popularity in Finland that led her to it!

When did Miss Lemon actually go to work for Hercule Poirot? We will look at this matter, and much more, in next week's Christie posting at The Passing Tramp. 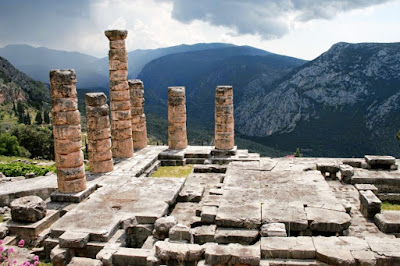 Posted by The Passing Tramp at 4:46 AM