Symphonie Fantastique: March to the Gallows (1964), by Mary Kelly

Mary Kelly (1927) once appeared to have a very promising long-term career in crime writing, but she seems to have been largely forgotten by the reading public today, while her older "Crime Queen" predecessors from the Golden Age of detective fiction--Agatha Christie, Dorothy L. Sayers, Margery Allingham, Ngaio Marsh--have gone into new paperback edition after edition. Moreover, Kelly's own path-breaking modern Crime Queen contemporaries, the late P. D. James (1920-2014) and Ruth Rendell (1930-2015), remain very popular and other more traditionalist contemporaries of hers, like Patricia Moyes (1923-2000) and Catherine Aird (1930), remain in print today.

Without meaning to be disrespectful to this accomplished author, I'm not even certain that Mary Kelly is still living, although the few entries on her record no death date. (If living, she would be 87 or 88 today.) When one looks on the internet for information about her, one is more likely to find detail about Mary Jane Kelly (c. 1863-1888), widely believed to be the last of the victims of Jack the Ripper.  Why is Mary Kelly so much less remembered than some of her 'sixties contemporaries?

One answer seems to be that Mary Kelly simply stopped writing.  Her output of ten crime novels has been referred to as "small," but in actuality she was fairly productive in the period when she was active, 1956 to 1974, publishing a book of crime fiction about once every two years.  By comparison, in PD James's first two decades of crime fiction writing, 1962-1982, James published nine genre novels. James, however, kept writing, extending her crime writing career, launched when she was 42, to nearly a half-century's duration; and she also had the inestimable advantage of a long-running popular series detective, Adam Dalgliesh, who appeared in fourteen of her novels.

After an initial run of mystery novels (A Cold Coming, Dead Man's Riddle and The Christmas Egg) featuring a poshly-named series sleuth, Inspector Brett Nightingale, who came complete with an opera diva wife, Kelly in the 1960s abandoned classic series detective fiction in the traditional mode. In 1961 she published her most successful novel, The Spoilt Kill, which won the Gold Dagger from Britain's Crime Writers' Association and was reprinted more than any of her other novels (Penguin, 1964, Harper Perennial, 1982 and Virago, 1999).  Kill was hailed as a model of the new school of detective fiction, praised not only for the authenticity of its workplace setting (a pottery), but for its bleak mood and convincing presentation of emotional states. (Kill and its two immediate followers also are series detective novels of a sort, but in an odd way.) 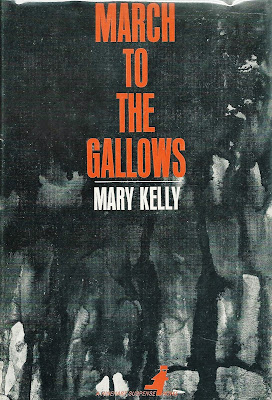 During the rest of the decade Kelly followed Kill with Due to a Death (1961), reprinted as The Dead of Summer in the US; March to the Gallows (1964); Dead Corse (1966); and Write on Both Sides of the Paper (1969).  The latter three novels all were finalists for the CWA Gold Dagger, and Due to a Death and Dead Corse in the 'sixties both were reprinted in paperback in the UK by Penguin. (In the same decade Dead Corse was reprinted in paperback in the US by Avon.)

Two novels followed from Kelly in the 'seventies, The Twenty-Fifth Hour (1971) and That Girl in the Alley (1974), but these won the author less critical attention, and neither title was reprinted.

In the 'seventies Kelly also lost her American publisher, Holt, Rinehart, who after the success of The Spoilt Kill  had picked up her books and published three of her works to much acclaim as "Rinehart Suspense Novels." After Kelly retired from crime fiction writing at the age of 47, her reputation began to fade, so that her fame receded to the status (if that) of a one-hit wonder, as the author of The Spoilt Kill.

This is most unfortunate, as Kelly's body of work in the crime fiction genre is a distinguished one, with no less than six of her crime novels still standing, in my estimation, as fine examples of the crime writers' art.  The early Inspector Nightingale novels are more traditional works (the latter two in the series recommended by me), while the next four Kelly novels are prime examples of the more modern, angst-filled crime novel, with intricate plotting still present.

March to the Gallows is one of these later novels.  Its title is derived from Hector Berlioz's Symphonie Fantastique, most particularly the symphony's March au supplice (March to the Scaffold/Gallows) movement. (A neighbor boy in the novel repeatedly plays a record of the symphony and there is a park area called the March that plays a major role in the novel).

Traditionalists Jacques Barzun and Wendell Hertig Taylor, who in their landmark mystery reference work A Catalogue of Crime deprecated the modern tendency to commingle the detective tale of entertainment and escape with the serious novel, were rather vexed by Mary Kelly's crime fiction.

Due to a Death they dismissed as a "tedious essay in self-torture" and they complained that The Spoilt Kill was, well, spoiled by Kelly's insistence "on laying bare each nerve of each character and playing a sinfonietta thereon."  Of March to the Gallows they complain that the protagonist, "a young woman librarian," is "ill and neurotic."

This kind of critical commentary says more about the cramped nature of Barzun and Taylor's view of the proper boundaries of the detective novel than it does about the quality of Kelly's work.

To be sure, Kelly's novel is very much in the modern mode.

Gallows's protagonist, Hester Callard, unquestionably is an embittered individual, still trying to recover from the sudden, accidental death of her late lover. Evidently to the phlegmatic Barzun and Taylor this understandable emotional state makes Hester "neurotic." Admittedly, the young woman has a sharp tongue and we frequently feel cuts from it in the novel, since she narrates the events.  She does so in a highly literate manner, with sharp observations and literary allusions. (If you didn't know who Lady Hester Stanhope was before you read this novel, you certainly will after you are done so.) I thought Kelly's writing was compelling, though Barzun and Taylor apparently did not consider that aspect of the book worth mentioning.

Hester has returned to her old family home on Colwell Street in Waterhall, part of the greater London metropolitan area, taking on a job in reference at the local public library. On Colwell Street she resides with her elderly father (Hester is 25, but her father was well into middle age when she was born) and her Uncle Percy and Aunt Norah.  The latter, a tartly outspoken but by no means unintelligent traditionalist, is a most engaging character, and I enjoyed following her exchanges with Hester.

This family made their money in--gasp!--trade, in contrast with their longtime genteel neighbors, the Leyburns, with whom Hester has always had an equivocal relationship. Not only are class relations a predominating concern of the novel, but race relations as well, with the rising presence of "Negroes" in London coming under scrutiny, as well as a nativist anti-immigrant backlash. The more things change....

Readers of the blog will know I just reviewed Agatha Christie's swinging 'sixties mystery, Third Girl, and I must say that while I didn't find Christie's portrayal of the mod era risible like some have, it was clear to me that Kelly, eight years younger than Christie's daughter, was much more familiar with these times than was the Golden Age Queen of Crime, as might well be expected. 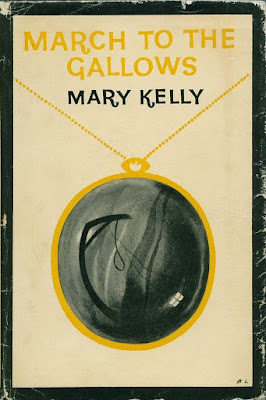 Kelly's novel comes off very much more as character study and social observation, especially during the first half or more of the novel, when the crime problem, which we know surely must be there somewhere, is presented quite allusively.

There's the theft of Hester's handbag, in which she kept a memento from her dead lover (a medallion necklace she recently accidentally broke), and we hear briefly of a body discovered on the march, but just what exactly is going on around Hester is challenging for the reader to determine.  However, it all comes together beautifully at the end, when we discern the criminal design in what seemed a series of disconnected events.

Barzun and Taylor complain that there is "no detection" in the novel, by which they mean a formal investigative process; yet there are numerous clues provided to the reader and the plot elements dovetail beautifully. (One bit is classically Christie-esque.) Berlioz's symphony is nicely worked into it all as well. For once I defer to the publisher's jacket summary, which really does put it well (much better, in my view, than Barzun and Taylor):

This haunting, bittersweet love story of lost love and life brings to a culmination Mary Kelly's skill not only as a teller of tales but as a magnificent exponent of the detective story....March to the Gallows is a challenge to the reader who is delighted by puzzles and the discovery of human nature in all its aspects.
Posted by The Passing Tramp at 1:45 AM