Note: For non-American readers of this blog, or American readers under the age of, say, forty-five or so, the post title references the theme song to the That Girl television series (starring Marlo Thomas), which premiered the same year Agatha Christie's Third Girl was published. 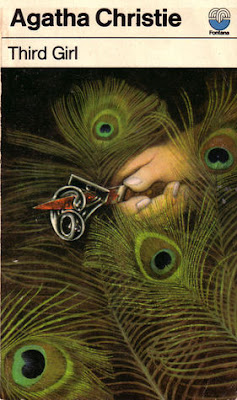 "She's a third girl....It's the way girls like living now.  Better than P. G.'s or a hostel.  The main girl takes a furnished flat, and then shares out the rent.  Second girl is usually a friend.  Then they find a third by advertising, if they don't know one...."
--Ariadne Oliver in Third Girl (1966)

Third Girl traditionally has not been much esteemed by critics.  In his book Adventure, Mystery and Romance John G. Cawelti cites Third Girl as an example of one of Christie "artistic failures," and Robert Barnard, in his generally quite favorable Christie monograph A Talent to Deceive, dismisses the novel as "one of Christie's most embarrassing attempts to haul herself abreast of the swinging 'sixties."

More recently, however, Laura Thompson in her 2007 biography of Christie praises Third Girl, declaring that the sixties milieu is "utterly convincing." Where do I stand on this one?  When I first read Third Girl when I was about twelve or so I must admit I thought it was one of the "boring" Christies. I didn't pay much attention to publishing dates at the time, but I now realize that I thought most of the later Christies, from 1965 (At Bertram's Hotel) onward, were pretty boring.  Rereading some of them now, I am finding them of greater interest.

One thing that appealed to me about Third Girl is how this is a full-bore Poirot mystery, something that was an increasing rarity after the mid-fifties, when Hickory, Dickory Dock and Dead Man's Folly were published. Between 1957 and 1975, a nearly twenty-year period, only six Poirot detective novels appeared: Cat among the Pigeons (1959), The Clocks (1963), Third Girl (1966), Hallowe'en Party (1969), Elephants Can Remember (1972) and Curtain (1975).

Of these novels, the last title was actually written by Christie during the Second World War, and Poirot plays a recessive role in both Cat and Clocks. (In both of those latter novels I believe he is writing a book on detective fiction, which he has finally finished in Third Girl.)

When Hercule Poirot popped up in Third Girl, it was his first fully active performance since Dead Man's Folly was published a decade earlier. Contemporary reviews of the novel, Cawelti and Barnard notwithstanding, were favorable For example, Anthony Boucher thought the plot "only moderately good Christie," but lavished praise on Poirot and his mystery writer sidekick Ariadne Oliver and the author's "acute sense of the immediate contemporary scene."

I think one can appreciate why critics were positive: it's nice to have Poirot back in a truly active capacity, even if he does rely extensively on subordinate investigations by a Mr. Goby, who appears on occasion in Poirot novels.  The brilliant Belgian sleuth is in his environment, with manservant George, the ever-efficient Miss Lemon, endearingly scatty Mrs. Oliver, his magnificent vanity and moral force, his tisane, his sirop de cassis, his chocolate, etc.--it's a warm bath of authentic Christie nostalgia, something I most definitely missed in Sophie Hannah's ballyhooed Poirot continuation novel, The Monogram Murders.

And Christie has worked up a good "situation" for Third Girl. When the distraught young "third girl" of the title, Norma Restarick, barges into Poirot's flat, telling him she thinks she "might have committed a murder" before abruptly departing, declaring that Poirot is just "too old" (the generation gap rearing its head), it's a set-up that immediately entices the reader.

The plot itself employs time-tested Christie devices and deceptions in an enjoyable manner, if not quite as smoothly as in the past. Aspects of the plot, though clever, take a bit of swallowing and the resolution of two of the characters' fates felt forced.

While there are not actually all that many scenes devoted to swinging 'sixties London in Third Girl, I didn't find Christie's portrayal of this milieu "ridiculous" like Robert Barnard did. (To be sure, Christie does drop drug references with abandon: Purple Hearts, Dream Bombs, coke, snow, hash, etc.) 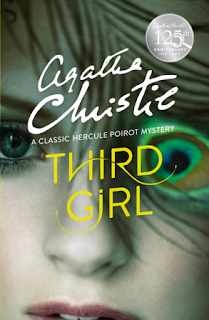 In fact, I thought David Baker, the modster artist character described by Christie as "a young man with lavish chestnut hair curled on his shoulders, wearing a red velvet waistcoast and a very fancy jacket" and nicknamed "the Peacock" by Mrs. Oliver, actually was the most interesting new character in the novel. Over the years he has inspired much of the cover art for Third Girl.

The basic idea of the "third girl" works beautifully, I think, Christie having alertly caught onto and cleverly employed a phenomenon of modern English life. (It's a shame the television adaptation moved the time period back to the Thirties.)  I was fascinated with Borodene Mansions, the London block of flats where the three girls live, which Christie likens in appearance to the prison Wormwood Scrubs; and I noted the harlequin wallpaper in their flat, captured on the Pocket paperback cover illustrated above. Christie was always fascinated by the Harlequin motif.

All in all, Third Girl is a worthy addition to the Poirot canon. If the novel doesn't make it to home base, it certainly hits a double, or, dare I say...a triple?


Postscript: In Third Girl there's a marvelous instance of the "odd" English terms to which Christie books used to introduce me, a young American reader.  Mrs. Oliver, in one of the novel's unlikely coincidences, happens upon Norma Restarick and David Baker in a cafe called The Merry Shamrock. The two are eating beans and toast, which always sounded singularly unappealing to me as a lad.  Is it really as simple as canned baked beans on toast with Worcestershire sauce on top?  I'm afraid my reaction, if actually presented with this dish, might be rather like that of these Americans:

British-style Beans on Toast
Posted by The Passing Tramp at 9:39 PM