Longtime readers of this blog will know that I have made a great cause of the fascinating crime fiction of Todd Downing (1902-1974), the Oklahoma Choctaw mystery writer who during the Golden Age of detective fiction published nine detective novels, a body of work much praised in both the US and the UK.

I detail a good deal about his life and family history in my 2013 book Clues and Corpses: The Detective Fiction and Mystery Criticism of Todd Downing, and there's also quite a bit in this blog post here. See also this shorter post about Coachwhip's reprints of his novels and my review of Todd's highly-regarded mystery Vultures in the Sky, along with Michael Dirda's Washington Post review of both this novel and Clues and Corpses. 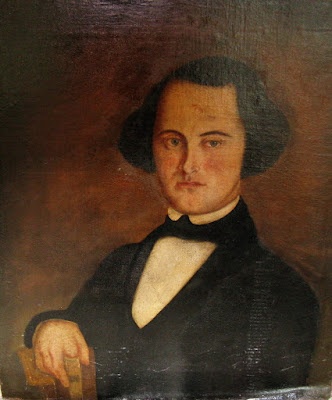 Todd Downing's Indigenous American ancestry was very important to him, and he is rightly considered an important Native American author; but he was in fact only partly American Indian (probably one-eighth), though he was an enrolled member of the Choctaw Nation and his father, Sam, was a figure of stature in Oklahoma's Choctaw community.

On the other hand, the ancestry of Todd's mother, Maude (Miller) Downing, was German (on her father's side) and Scots-Irish (on her mother's side), and both sides of her family originally hailed (like my own mother's incidentally), from early European settlers in Pennsylvania.

Todd's great-grandfather, Dr. James D. Shields (1816-1887), pictured immediately above, originally practiced medicine in the Lawrenceville section of Pittsburgh, Pennsylvania, before moving in the 1850s to Albia, Iowa, where he lived the rest of his life. Recently the son of Todd's sister, Ruth, sent me this photo of a portrait of Dr. Shields, which I naturally wanted to upload to me blog, being the completist that I am!  So here it is.  This portrait used to hang in the Downing family home in Atoka, Oklahoma, pictured below.

At the top of this piece I also included a recently unearthed college annual photo of Todd, when he was a student at the University of Oklahoma. Todd would go on to get a BA and an MA at OU and there serve as an instructor of languages--he was fluent in five--for a decade, during which time he wrote his first several detective novels (all in English, though they are set, most atmospherically, in Mexico).
Posted by The Passing Tramp at 1:26 AM