Sometimes I get distracted with other jobs and don't continue a blog post series in what you might call a timely fashion.  In this case, it's been nearly two years!  Back in December 2013, I started writing about the correspondence between Raymond Chandler and a much lesser-known hard-boiled (sometimes medium-boiled) writer, James M. Fox. (See my admittedly rather tepid review of his novel The Gentle Hangman.)  The correspondence sheds revealing light on attitudes toward the crime fiction craft by two mid-twentieth-century practitioners of it, one of them one of the mystery genre's most important figures.

When I left off, Fox, in a letter from 3 March 1953, had just informed Chandler that he had, at Chandler's suggestion, started writing a spy novel, nearly completed, which he wanted to dedicate to the older author: The basic format is not unlike that of [Somerset Maugham's] Ashenden, although I can hardly hope even to approximate Maugham's craftsmanship and general excellence.

Chandler replied that "I should be only too flattered at the idea of having one of your books dedicated to me," adding that "I have read quite a few spy stories (I mean recent ones, written since the war) but I can't say that I have read anything that impressed me much."

Although he admired crime writer Dorothy B. Hughes "very much," he wasn't impressed with her recent espionage novel, The Davidian Report.

"It may be that there is something self-defeating in the spy story itself and that intelligence or counter-intelligence work in fiction is ether damned dull stuff  or so oversimplified that it becomes silly," he ruminated.  "The same thing could probably be said about police work, and perhaps this is why so few mysteries of any quality (when I say so few, I can't offhand think of any) are written around actual police detectives, or to be more accurate I should say police detectives who might conceivably actually be policemen." 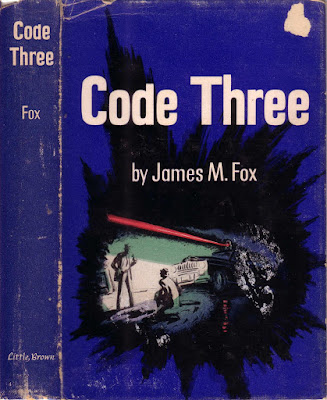 In his response Fox noted that he was about to publish a new novel, Code Three, the first in a new series, with a police sergeant protagonist. "The publisher likes it, which means very little, of course" he noted bluntly. "It will probably sell all right because of the sex plus violence element in it, and because it contains at least a flavor of actual police work, but the word 'quality' is one I hardly expect to hear mentioned in connection with it."  [In the event critic Anthony Boucher found the material in the novel over-familiar, but declared that "it reads at such a terrific clip, with such economy and vividness, that your reservations come only after you've finished it."]

On 8 January 1954 Fox sent Chandler a copy of his completed spy novel, Dark Crusade, and three weeks later Chandler replied, bestowing considerable praise on the book, though not without some qualification: 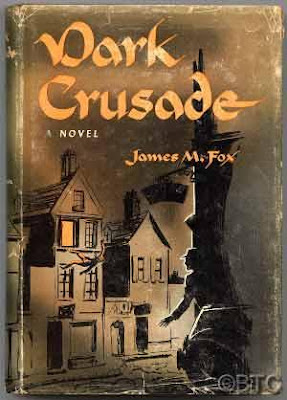 I liked the book so much that I wish I had three more just like it to look forward to....I like the cool literate way in which you write.  I think some of your stuff will go over the heads of the lending library creeps, but that can't be helped....What the story lacks is a central drive.  I'm talking, please understand, in terms of popular support....As for comparisons your stuff makes most of the so-called spy novels seem pretty fantastic [i.e., unbelievable].  I'm not thinking of a terrible piece of rubbish like Little Red Monkey (which is practically G. A. Henty) but rather of competent writing jobs such as The Davidian Report or [Julian Symons'] The Broken Penny.  Neither sounds in the least as if the author knew anything about intelligence or C. I. work  Of course there is always a danger in knowing too much.  You forget to simplify.  I don't think you did, not for me anyhow, but I do think the book might have had a possibly better sale if the central story line had been simpler and more emotional.

Occasioned by his reading of Dark Crusade, Chandler went on to express his views of the Cold War, as well as, incidentally, the American Civil War, by my reading denouncing the United States for not sufficiently resisting the Soviet Union and avowing support for the Lost Cause:

I don't suppose the people of this country will ever let themselves realise how much harm to themselves and their future their foreign policy has done.  The principle of self-determination seems to work everywhere in other people's colonies, unless of course it is a question of placating some swine like Stalin, when you toss whole nations into the incinerator without a qualm. The only domestic problem of self-determination we have faced was in the War Between the States (in which I should most certainly have fought on the losing side). It was also almost the first demonstration of high-powered propaganda in convincing the world that the war was about slavery, which it was not. The nation, said Lincoln, cannot exist half slave and half free, but apparently we think the world can. So much for that.

Chandler also noted that his new Philip Marlowe novel, The Long Goodbye, had sold close to 30, 000 copies in the UK, adding "I only wish American sales could compare. Adjusted for population that would mean a real sale here." He promised he would send Fox a copy of the book, which the next year would win the Edgar for best mystery novel.

In his reply Fox expressed dissatisfaction with Dark Crusade, explaining that he had to draw on pre-1939 memories of Europe and had been allowed only six months to complete the book: "This sort of writing really shouldn't even be attempted without at least 50, 000 words in background notes, made on location within the past year or so."

Fox ruefully admitted to Chandler that

The question of compromise between cool fact and emotion is one that has always bothered me, badly.  I realize full well that the average reader craves emotional experience, yet it is very difficult for me to supply anything of the sort.  My instinctive tendency is to supply only "facts," whether fictitious or not; to place them in studied relationship to each other, preferably ironical relationship; and to demand that the reader understand thoroughly, grasp the meaning, perform the often necessary doubeltake and work up his own emotional reaction.  This procedure is against the rules, I know, and sells no books.

Fox noted that he was planning a trip to Europe and he hoped to write another espionage novel set there. However, he feared that financial considerations would force  him "to stick to routine bread and butter stuff for quite awhile. Right now I'm on one of those three-and-four-letter word, six-word sentence, cops and gangsters stories for which the reprint publishers are yammering."

In the hope of facilitating his book sales Fox was now advising publishers in publicity material "not to emphasize my Dutch origins."  He wryly explained that the "average American reader tends to associate the adjective Dutch only with cheese, wooden shoes and little boys plugging holes in dykes with their thumbs."

Chandler, who now was calling his correspondent simply "Fox" (rather than "Mr. Fox") urged in his next letter, "Cut out the 'mister' please."  Later in the year the two would advance, in term of their epistolary intimacy, to calling each other "Ray" and "Jimmy." More to come soon, I hope!
Posted by The Passing Tramp at 4:50 PM