Elizabeth Daly's late-blooming but successful mystery-writing career was launched in 1940, when the author was past sixty, and ended, sixteen novels later, in 1951, when she was 73.  Daly lived for sixteen more years, passing away in 1967, so why she stopped writing mysteries I have no idea. Personally, I would have liked some more books from her, but at least she retired on a comparatively high note, with The Book of the Crime.

As I mentioned in my review of Daly's excellent Night Walk (1947), many of the author's detective novels have something of a minimalist feel, much in contrast with many modern mysteries, being rather short and sparely, though very pleasingly, written.  The Book of the Crime is even more minimalist than usual with Daly, by my estimate being around 45, 000 words, barely more than the length of a long novella.  It is set in April 1950 and concerns the travails of a young wife, Rena Austin, married for just a year to a lame war hero husband (wound to the leg), recently widowed when he met Rena. 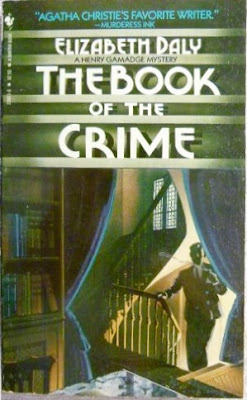 This being a Daly novel, the husband, Gray Austin, recently inherited from a deceased uncle one of those New York brownstone row houses, wherein he resides in idleness, along with Rena; his siblings, brother Jerome and sister Hildreth (love that name); Irish housekeeper Norah Callahan; and Boston terrier Aby.

One feels that, along with Daly's bibliophile detective, Henry Gamadge, S. S. Van Dine's Philo Vance and Rex Stout's Nero Wolfe might be just around the corner.  This old New York atmosphere, surely already anachronistic in 1951, is a huge part of the pleasure of the Daly mysteries, as noted by one of Daly's biggest fans, Agatha Christie (whose birthday is tomorrow, by the way--more on that soon).

Out taking Aby for a walk, Rena reflects that her quickie marriage to Gray Austin was rash indeed. Her husband has turned into a melancholy and uncommunicative living companion, while her siblings-in-law are snide and condescending and Norah surly and saucy.  When, after returning from the walk with Aby, Rena has an altercation with her husband concerning a certain book in the house, she flees from the house in fear, determined never to return. 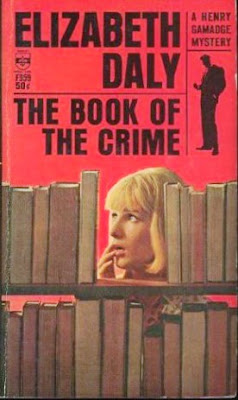 Happily, Rena once made the acquaintance of Henry Gamadge, bibliophile and amateur sleuth, and she is able to call on him to help get her out of this pickle.  We once again get glimpses of the Gamadge menage, now including, besides butler Theodore, wife Clara, two young children and a dog and cat, all of whom get along perfectly harmoniously (another part of the escapist pleasure of the Daly tales).

There is a murder, well into the story, of a character the reader never meets while he is among the living, so the emotional impact of this event is distant.  Rather, we are concerned to see that Rena gets extricated from her ill-advised marriage.  But with Gamadge on her side, we can anticipate a happy ending for the nice young woman.

Though more simply plotted than many of the earlier Dalys, The Book of the Crime has a clearly articulated mystery and all the nostalgic charm of vintage Daly.  It is surely a book that all the author's fans will enjoy. The clever last line, the very last line of the Henry Gamadge saga, is particularly to be treasured.  As I discussed in a recent blog post, Daly was not only admired by Agatha Christie, but by Eudora Welty as well.  You scarcely need more recommendation than that, but I very much like Daly too.

The Book of the Crime will be reissued next year, I believe, by Felony & Mayhem, one of the finest vintage mystery presses.  Enjoy!
Posted by The Passing Tramp at 9:07 PM