Five detective novels by Marian Gallagher Scott were published between 1932 and 1946 (the last one posthumously, Gallagher having passed away at the age of fifty-one in 1943). Four of these novels--Dead Hands Reaching (1932), Tall Man Walking (1936), The Attic Room (1942) and Death's Long Shadow (1946)--have now been reprinted by Coachwhip as dual "twofer" volumes, the first with Dead Hands Reaching and Death's Long Shadow and the second with Tall Man Walking and The Attic Room.

I wrote a single 4000-word introduction to the two volumes, along with a spoilerfiffic afterword to Tall Man Walking/The Attic Room--so make sure you read the afterword indeed after you've first read all the words of the two tales.  For the Coachwhip cover designs, which I think are quite smashingly done, see the bottom of this blog piece. Links to Amazon for each book can be found here and here.  They also are available at Amazon.co.uk.

Marian Scott illustrates the fascinating careers of many of our forgotten Golden Age mystery writers. Born in 1891 in the farming village of Wilsey, Kansas (pop. 153 in 2010), Maude Marian Gallagher, as she was known then, by the turn-of-the-century had moved with her parents and younger sister to the state capital, Topeka, where her father owned a drugstore.  There she appears to have lived the typical life of a middle-class, middle-American store owner's daughter.

After graduating from Topeka High School and a local business college Marian became a stenographer, her many jobs including a stint as a desk clerk for the Kansas State Senate. However, Marian had bigger plans in mind for herself that extended beyond the plains of Kansas.

Spurred on by her local drama class teacher, Marian in 1914 decided to move to Chicago and enroll in the Lyceum Arts Conservatory with the hope of becoming a performer in circuit Chautauqua: traveling shows that played in thousands of venues across small-town America and included lectures, oratory, music acts and performances from famous plays.

During her first year at the Conservatory Marian was chosen to play the female lead in the school's performance of The Taming of the Shrew.  Two years later, she married Earl W. Scott, the dashing young man who had played the male lead in the Shakespeare play, and the enterprising couple formed the Kenilworth Players, a circuit Chautauqua company that would, after Earl's service in World War One, perform all over the United States for the next decade.  (Follow this link to see photos of the Scotts in their signature roles from Shrew).

In 1927 the Scotts retired from circuit Chautauqua and settled in Santa Fe, New Mexico, where they turned to the writing of pulp crime fiction for a variety of magazines, including the fabled Black Mask. (They named their adobe cottage Crooks' Nook.) Occasionally the Scotts wrote stories jointly, but for the most part they published their work independently. The pair was extremely prolific in the short fiction vein, publishing some 200 known stories.

In 1932 Marian Scott published, under the slightly obscuring pseudonym Marion Scott (the name she signed to her pulp fiction), her first detective novel, Dead Hands Reaching, which introduced her series detective, police detective Courtney Brade. He would go on the appear in The Attic Room and Death's Long Shadow, these latter two novels published under the more hoity-toity pseudonym "Katherine Wolffe."

My favorite of these three interesting mysteries in Death's Long Shadow, where the murder of a mysterious hermit woman in rural Minnesota puts Courtney Brade on the trail of decades-old misdoings in a Massachusetts town. This novel was actually completed by Earl Scott, Marian not having quite finished it before her premature death in 1943.

Appropriately, Scott dispensed with the services of her series detective, replacing him, for the duration of this one novel only, with suave psychiatrist Kenneth Borden (the "tall man" of the title).

Tall Man Walking received rave reviews around the world.  In Australia, where like in England it was published under the lurid title Bride of Death, one reviewer, drawing a distinction that in the mystery genre would become increasingly pertinent over time, declared of the novel: "As an exciting story of death and crime detection this book is good; as a skillful study in suspense it is remarkable."

Meanwhile, in the United States, the talented crime writer and mystery reviewer Todd Downing deemed Tall Man Walking "one of the trickiest and and most intelligent yarns of the season" and pronounced that "Katherine Wolffe is a name to be watched in mystery fiction."

Unfortunately, "Katherine Wolffe" was forgotten, as was Marian Gallagher Scott, but four of her crime novels now are back, after many decades, for the modern mystery reader's delectation. Enjoy! 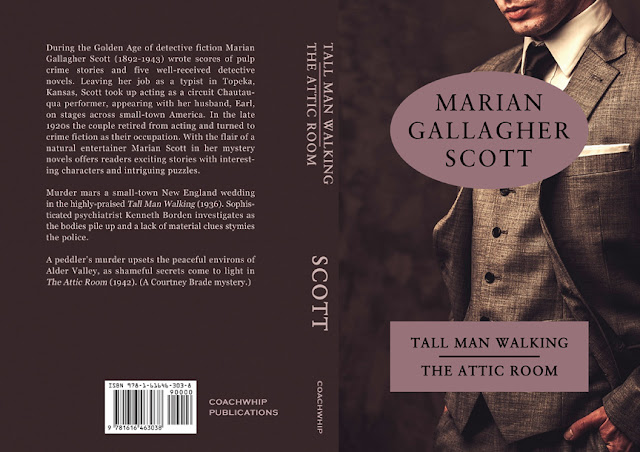 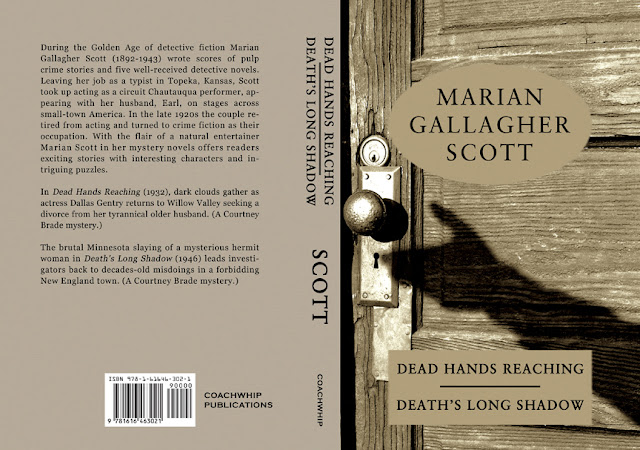 Posted by The Passing Tramp at 8:41 PM