Today at The Passing Tramp we commemorate Agatha Christie's 125th birthday.  I know so many of us encountered Agatha Christie's sublime mysteries at young ages.  In my own case it was forty-one years ago in 1974, at Sanborns Department Store in Mexico City, where I was living for a summer with my family. I was all of eight years old and, to be honest, my favorite thing about Sanborns at the time was the milkshakes and cookies I could get at the restaurant.

But one day my Mom was looking at the paperback book racks and you can guess what she picked out: Agatha Christies!  Four Pocket paperback editions, fourteen pesos apiece (about $1.12 each I believe).

These were the days when American publishers still used the American titles of Christie novels, incidentally. The three Christies were Easy to Kill (Murder Is Easy), Funerals Are Fatal (After the Funeral), The ABC Murders and Then There Were None. (I'll just pass here on the original British title of the latter novel.)

I read all four myself in our apartment several stories up, sprawled on a sofa by a window overlooking the street.  I can also recall reading on that sofa a cozy little "twist" story in one of my magazines--Alfred Hitchock's Mystery Magazine?--that I think was called "The Machete Murderer." Is it any wonder I devote so much time as an adult to mystery/crime fiction?  It was fated!

Later that year with my family I saw the film version of Murder on the Orient Express, with Albert Finney as Hercule Poirot. Agatha Christie's place in my mind as this old English lady who had written these incredibly brilliant mysteries was firmly fixed.

My guest blogger today, San Mateo High School drama teacher Brad Freidman, gives us an charming account of his "first time" with Agatha, and includes his own list top four list of Christie favorites. This is just one of several Christie pieces that will appear at The Passing Tramp this week, as we commemorate our undoubted Queen of Crime.

I met the work of Agatha Christie when I was eight or nine.  I didn't actually read a book. Instead, I had a wonderful babysitter named Steve Levy who rightly believed that young boys did not need to be cushioned or coddled with bedtime stories "appropriate" to their age.  Instead, he would create serialized versions of classic Hitchcock movies or murder mysteries that he loved, and he would regale us during each visit with enough of the story line before bedtime that my brother and I found ourselves unconsciously willing our parents to embark on another night on the town just so that we could hear the next chapter of Steve's latest saga.  He was our Charles Dickens, and we were his American fans, clamoring on the shore for the shop to debark with the latest installment on Nicholas Nickleby or Bleak House.

One night, Steve began a tale about ten strangers trapped on an island with a homicidal maniac. Needless to say, his fertile teenage memory made the murders that occurred more steeped in blood than the actual book would describe (the butler got whacked into many pieces with an axe, I believe!).

This young mind, until then satisfied with The Hardy Boys and Encyclopedia Brown, began a transition into the next phase of mystery reading that would begin in earnest two years later when, on the paperback rack in a local drugstore, I spied Ten Little Indians, newly republished to tie-in with the release of the 1965 film.  I begged my mom to buy it for me, and my lifelong relationship with Christie was sealed.

Is it a surprise that And Then There Were None is one of my four favorite Christies?  To my mind nobody has ever produced a better, more suspenseful, variation on the "old dark house" mystery than this tour de force (though the house in the novel is a sunlit modernist mansion).

In her Autobiography Christie, reticent about her writing process, writes only that she wrote the book "because it was so difficult to do that the idea fascinated me."  We know that books and films about people trapped in a abodes of lurking death abound in the Golden Age.  The Invisible Host, which predates Christie's novel by eight years, has a recorded voice threatening the guests.  But Christie's plotting skill is breathtaking.  In my opinion, it has never been equaled.

Unlike most novels about serial killers, where the motive tying the murders together is often a more interesting puzzle than the murderer's identity, Christie early on unveils a motive to the reader and the characters.  There are clues to the killer's identity, as befits the Mistress of Mystery, but they are really incidental to the novel's growing suspense as, one by one, "justice" is meted out to the victims. 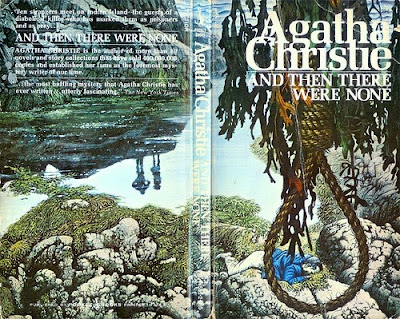 Those who accuse Christie of "cozy" sweetness cannot deny the bleakness of this book from start to finish.  And for a writer often accused of spotty characterization, Christie's work here strikes me as quite brilliant.  She manages to delve with increasing depth into the inner lives of those who survive the longest, letting us peer into these troubled souls without giving away so much that we can ever eliminate one or another as the killer--that is, until just before a character's death.

There is one passage I will always savor when I reread the book: the remaining five guests are sitting in the living room having drinks, and Christie reveals their inner thoughts, including those of the killer. It is clear that all of them are losing their marbles in one way or another, and trying to figure out which thoughts belong to which character is, to say the least, a very challenging proposition.

It is fitting that one of my top four Christies would be a stand-alone book, two would be Hercule Poirots and one a Miss Marple.  Details about my favorite Poirots and Marple will be found in Part Two of this piece. 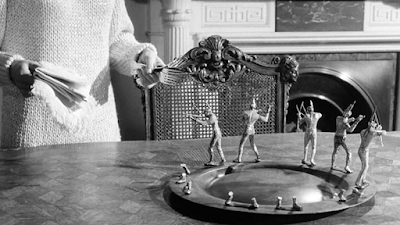 Thanks, Brad, that was great.  I must say that axe murder in And Then There Were None scared the stuffing out of me when I was a kid reading it forty-one years ago in Mexico City.  Highly sinister!  It was perhaps even more frightening than "The Machete Murderer."

Look for Part Two later today.
Posted by The Passing Tramp at 12:28 AM