In Honor of Agatha's 125th: Brad Friedman's Other Favorite Christies

In Brad's last post he discussed his introduction to Agatha Christie through her bestselling mystery, And Then There Were None.  In Part Two of Brad's post he discusses his three other favorite Christies: Death on the Nile, After the Funeral and A Murder Is Announced.

Unlike Agatha Christie herself, I have never tired of Hercule Poirot: his odd appearance, his little mannerisms, the way he plays against xenophobic tendencies in pre-WW2 England, all delight me.  I won't say I prefer Poirot to Miss Marple, for she delights me, too.  I think most Christie fans agree that the Poirot novels are better plotted and clued, while I tend to think that Christie often created more fully rounded sets of characters in her later Marple books.  Maybe it's because Miss Marple doesn't overshadow the suspects the way that Poirot does, with his larger than life personality.

DEATH ON THE NILE


The first of my two favorite Poirots is Death on the Nile.  One has to applaud the fascinating variations Dame Agatha devised in her novels on the love triangle/quadrangle.  Some of my favorites include Towards Zero, The Hollow and Five Little Pigs.

Death on the Nile is the most satisfying of all these variations, largely due to the three fascinating young people at its core.  The victim, Linnet Ridgeway, is a "poor little rich girl," not nearly as openly rotten in the novel as she is in the enjoyable film, although her callous disregard for other people provokes her own undoing.  Christie makes Simon Doyle quite likable, even though he is a cad to throw off one person for another.  I think the fact that one can sense in Simon, despite his weaknesses, true adoration for the woman he loves, makes us empathize with and root for him, despite his actions.

And then there is Jacqueline de Bellefort, one of Christie's best, and most tragic, characters.  When Poirot sees her for the first time, he worries about the depth of her passion for Simon: "She cares too much, that little one.  It is not safe.  No, it is not safe."  The simple and dramatic action of one woman stealing another woman's man sets the stage beautifully for a great mystery.

But that is not enough for Christie.  She encircles this romantic triangle with a large cast of supporting characters and transports them to an exotic setting befitting a millionaire's honeymoon. On the steamer Karnac appear many of the threads that one might find in a Golden Age mystery: conniving attorneys, sneering Communists, jewel thieves, even an incognito terrorist!

It takes Poirot to sort though the complicated lives springing from the passenger list and unmask the true nature of a complex murder plot.  One of the things that touches me the most every time I revisit the novel is that, in many ways, Poirot's motive for getting involved here is his strong response to Jacqueline's love for Simon and his desire to protect her.  This leads to one of the most poignant endings in a Christie novel. 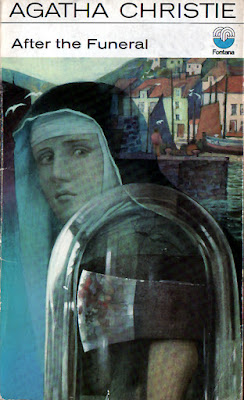 My other favorite Poirot--and to my mind the last great Poirot novel that Christie wrote--is After the Funeral.  It is hard to speak about this one without spoiling anything. Suffice it to say that it contains one of the best examples of misdirection in Christie's fiction.  The plot, the clues, the solution, all are as scrumptious as a full English tea!

That said, there are other delights to be found in the novel, including the depiction of the impact of the postwar dissolution of England's great estates. While the younger generation (and Uncle Timothy) bicker over the late Richard Abernethy's belongings the servants and the older generation (including Uncle Timothy) bemoan the long-gone glorious days of life at Enderby.

The other fun aspect of After the Funeral is seeing Poirot working undercover as M. Pontarlier of UNESCO, adopting his most emphatically foreign persona in order to watch unnoticed as the suspects incriminate themselves.  Every time I reread this one I get a pleasant tingle as each clue presents itself, leading to a thoroughly delightful denouement.

A MURDER IS ANNOUNCED

Finally, I turn to my favorite Miss Marple book, which one would have a hard time arguing is not the best Miss Marple mystery.  Christie's 50th detective novel was A Murder Is Announced, and if it suffers a little from having too many disguised people lurking about the lanes, this is a small price to pay for such a delightful excursion into a small English village right after the war, where the old families have dispersed and people find themselves trying to live the old life among virtual strangers.

It's a situation ripe for a murderer's dastardly plan, and this one unfolds in one delightful scene after another.  Christie was a master at setting up a great premise at the beginning of her books; even the weaker novels at the end of her career often have the most promising hooks.  Here Christie delivers on one of her best plot hooks, and the neighbors who show up at Miss Blacklock's cottage as a result of an open "invitation to a murder" they found in the Much Benham News and Chipping Cleghorn Gazette, along with any lucky readers who show up, are given their money's worth and then some! 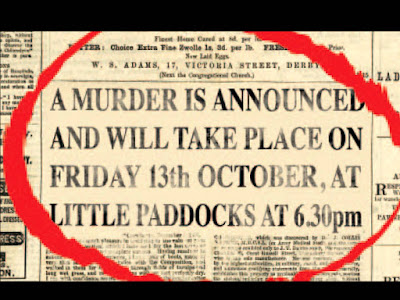 I think this is Miss Marple's best clued mystery.  The amateur sleuth relies less on instinct and village parallels and more on her keen powers of observation and some well-placed clues. I am a great fan of those scenes where Christie places a clue in plain sight, fully aware that the causal reader will take no notice of its significance.  A Murder Is Announced contains more than one of the best examples of classic Christie clueing.

Happy birthday, Agatha Christie!  The gratitude I feel for all the pleasure you have give me and all your many other fans for nearly a century now is immeasurable.

The Passing Tramp: Interesting that Brad 's favorite four include And Then There Were None and After the Funeral, two of the four Christie novels I first read, back in 1974.  What are your favorite Christies?  I may just post my own very personal top ten list tomorrow.
Posted by The Passing Tramp at 12:01 AM