Picking up where I left off last week, Hercule Poirot has now begun his seventh labor in Agatha Christie's the short collection The Labors of Hercules (1947)

"Dash it all, there's a trace of insanity in nearly every old family!"

Unfortunately, The Cretan Bull is the weakest story in the collection, in my view.  It deals with that hoary chestnut of classic English crime fiction: the county gentry family that ostensibly has a thread of insanity running through it, so that the nice young couple simply can't get married, dash it all! (As I recollect this plot is similar to the one Christie used in an early, and indifferent, Poirot short story, The Lemesurier Inheritance.)

Inevitably, there's mention of sheep with their throats torn out, and all that sort of thing, provoking this hushed exchange:

"There is--insanity, I understand, in the family?"

""Only crops up now and again," he murmured.  "Skips a generation or two."

This pack of cardboard country ninnies is clearly being led by their noses by some malign individual and you should be able to see the twist well before Poirot.  It's pure hokum, but at least I learned that "Think I'll go and see if I can get a rabbit" is country gentry code for "Cheerio, I'm about to blow my brains out."


In The Horses of Diomedes Poirot takes on the cocaine trade, that perennial scourge of gilded fast sets in Golden Age mystery fiction.  It's a pretty good story, though not comparable with the best in the collection.

The Girdle of Hyppolita creatively combines art theft with the vanishing of a proper teenage English girl on her way to school in France.  (Schoolgirls stand in for the Amazons from the mythical Hercules labor.)  The plot is a variant on a trick Christie has used before, but it's nicely done.  Chief Inspector Japp makes a welcome appearance, plus there's one of those indomitable schoolmistresses Christie always portrayed so well.

The amusingly-portrayed Miss Carnaby, who appears in The Nemean Lion, the wonderful first tale in Labours, returns in The Flock of Geryon, where she acts as a deputy of Hercule Poirot in investigating one of those odd religious cults that spring up in classic English mysteries, never favorably.

Miss Carnaby primly announces to Poirot that naturally she approves only of "orthodox religion":

You refer to the Greek Church?" asked Poirot.

"Oh no, indeed.  Church of England.  And though I do not approve of Roman Catholics, they are at least recognized." 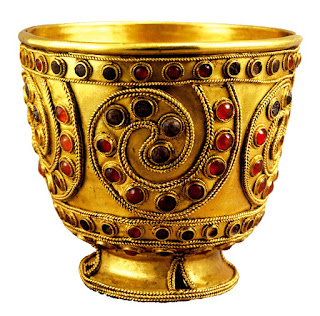 Miss Carnaby means the Flock of the Shepherd, headquartered on the Devonshire coast. She suspects the Flock gets credulous wealthy people to bequeath their estates to it before somehow bumping 'em off! The intrepid spinster enrolls in the sect to investigate--but she may be in peril of her life! Inspector Japp appears in this one too, by the way.

In The Apples of Hesperides, Poirot is tasked with tracking down a precious stolen Benvenuto Cellini goblet of gold (the ornamental decoration on it includes apples), originally used by Pope Alexander VI--i.e., Rodrigo Borgia. Robert Barnard cited this as an instance of philistinism in Christie, in that Cellini was but two years old when Pope Alexander VI met his reward, meaning that for the goldsmith to have made a goblet for this Pope he would have had to have been quite an infant prodigy indeed!

In spite of this historical error, it's an enjoyable story, with an always timely moral. In lieu of Japp, an Inspector Wagstaffe appears in the tale--could he have been inspired by John Rhode's Jimmy Waghorn? 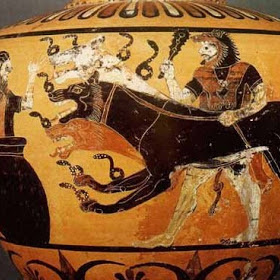 Poirot's final labor takes place in the tale The Capture of Cerberus, an excellent story in which Poirot is reunited with his old flame of sorts, the Countess Vera Rossakoff, who has left crime--or has she?--to run a fashionable London nightclub provocatively named Hell.

When Poirot unexpectedly encounters the Countess while riding in the Underground (this in itself is memorable) and asks her where he may meet her again, she cheekily answers him, "In Hell!"

This is a most ingenious and ingratiating crime story, allowing Poirot to complete his labors in high style. Inspector Japp is on hand in this tale as well.

At this point, Poirot, contrary to his stated intention, didn't retire, of course, though it wasn't long after the original serial publication of The Labours of Hercules tales that Christie wrote what actually was Poirot's last case, the novel Curtain. However, it was only published over thirty years later, in 1975, shortly before Christie's death.

Interestingly, the Poirot television series in its final season (2013) filmed The Labours of Hercules as its penultimate film (followed of course by Curtain).  Some fans have criticized this film for failing to incorporate all dozen of the labors within the story, and that is a fair criticism; yet the film did manage to include, in substantive form, four of the Labors: The Arcadian Deer, The Erymanthian Boar, The Stymphalean Birds and The Capture of Cerberus.

The Arcadian Deer, which provides the film's bookends, is most movingly done. (This is the story that details the love of an auto mechanic--in the film Poirot's chauffeur--for a vanished maid.) The Erymanthian Boar--the one about Poirot stranded at a mountainside Swiss hotel with a depraved murderer and a number of eccentric guests--provided the main basis of the film. It is also quite well depicted, as are the other two tales. While considerable changes are made to The Capture of Cerberus, a surprising amount of the material is faithful to the general idea of the story, though it is given a much more serious (and psychologically improbable) character twist. Overall the film is quite bittersweet.

I love the story collection--perhaps someday we will get a more complete adaptation, when, inevitably, a new Poirot television series is commenced!