In the Shadow of Coleorton Hall: More on the Early Life of Annie Haynes

Readers of this blog will know that I have written here about how in the early 1900s Annie Haynes (1865-1929) moved to London, where she became a successful mystery novelist and lived for over twenty years (until her death) with the prominent feminist intellectual and social activist Ada Heather-Bigg.  That much I had determined some months back, but it was only this year, as I discuss in my introduction to the new Dean Street Press editions of seven of Haynes's mystery novels, that with the help of a couple of individuals in England, Carl Woodings and Peter Harris, I was able to determine something more of Haynes's fascinating family origins.

From my reading of Haynes's detective novels I suspected that the author came from England's Midlands and it turns out she indeed did. Haynes was born in 1865 in the town of Ashby-de-la- Zouch, Leicestershire (very close to the border with Derbyshire, one of my earlier guesses for her home county, along with Nottinghamshire), the daughter of Edward (Edwin) and Jane (Henderson) Haynes.  Today Ashby-de-la-Zouch is known for its ruined castle (Ashby-de-la- Zouch Castle), once the longtime seat of the noble Hastings family.

Annie's father, Edwin as he was known (though he was baptized with the name of Edward), was an ironmonger and the son of an ironmonger, a Shropshire lad who originally hailed from the small town of Much Wenlock, where the family kept an ironmonger's shop. Edwin and his brother and sister were raised strict Methodists. 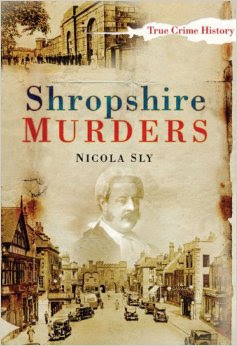 Locals are said to have whispered to themselves that Morgan had bewitched the much younger and reputedly slow-witted Davies into remaining with her and doing her bidding, though she was known to have subjected him frequently to foulmouthed harangues.

Evidently the worm turned.  Davies was found to have murdered Morgan with a large clasp knife sold to him by Thomas Haynes just two days before the murder. The bloody knife had been left on a dresser in Morgan's cottage.  Davies was convicted of murder and sentenced to death, but this sentence was commuted to life imprisonment, on the grounds of provocation.


Edwin Haynes's marriage to Jane Henderson did not end violently like the common law arrangement of Ann Morgan and William Davies, but it obviously was not a successful union of man and wife.

By 1861, when he was twenty years old, Edwin Haynes had left the family shop and moved to Ashby-de-la-Zouch, where he apprenticed with local ironmonger John Orchard. There he married Jane Henderson, daughter of a prominent landscape gardener, the Scottish-born Montgomery Henderson, who superintended the famous gardens at nearby Coleorton Hall, home of the Beaumont baronets. (The poet William Wordsworth once designed a winter garden for Coleorton Hall.)

After Annie was born in 1865, Jane Haynes became pregnant again the next year. Before she gave birth to Annie's brother, however, Edwin Haynes had left his family, under the name Edward Haynes boarding the ship "Uruguay" at Liverpool on 20 November 1866. In a development that reminds one of all those Golden Age detective novels where family "black sheep" depart England for foreign climes to start life anew, Haynes embarked to Rosario, Argentina (home to a large English community) to work on building railroads.

Once settled in Argentina, Edwin Haynes may have married again and had a son named Eduardo, who appears to have been a successful lawyer. According to a Haynes descendant, when Edwin died he left an island located near Rosario that he owned (appropriately named Haynes Island) to Annie's brother, Thomas, provided that he come live there.  Thomas declined to do so, so Edwin's English family inherited nothing from him. (Thomas himself became an ironmonger, learning the trade from his grandfather and uncle in Much Wenlock.)

After being abandoned by her husband, the pregnant Jane Haynes moved with Annie into the dwelling of her parents, the gardener's cottage at Coleorton Hall, where she gave birth in 1867 to Thomas.

Annie thus grew up on the estate of Coleorton Hall, surely giving her significant glimpses of the life of the gentry, which she would later put to good use in her fiction. In 1871, when Annie was six, Sir George Howland Beaumont, 9th Bt., resided at Coleorton Hall with his two young sons and a Dowton Abbey-ish retinue of servants, including a governess, butler, footman, groom, stables helper, nurse, cook, kitchenmaid, three housemaids, coachman, gamekeeper, laundress, laundry maid, head gardener (Annie's grandfather) and two assistant gardeners, not to mention all the people who worked on the Hall Farm.

During his lifetime did Annie Haynes ever learn what happened to her father, of whom she would have had no personal memory whatsoever from her childhood years? Evidence from one her novels suggests that perhaps she did.

In her horse-racing mystery, The Crime at Tattenham Corner, we find that the racehorse Peep o'Day, owned by murder victim Sir John Burslem, is sold by his widow, Lady Burselm, to one Ramon de Villistara, a big Argentinian horse breeder who owns a stud-farm north of Rosario. At one point in the novel, Inspector Stoddart pronounces that Argentina makes a good "hiding place" for absconded Englishmen....
Posted by The Passing Tramp at 3:52 AM