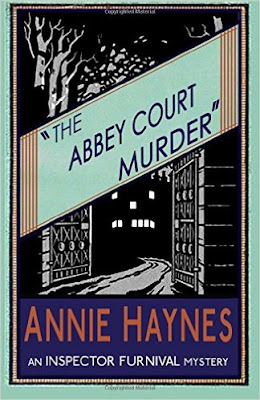 The Abbey Court Murder is Annie Haynes's second mystery novel.  It appeared in 1923, the same year that The Bodley Head published the author's debut book of fiction, The Bungalow Mystery.

The twelve detective novels Haynes produced between 1923 and 1930 reflect a shift on her part from the more sensationalist style of the Victorian and Edwardian era to the more detached modernity of the between-the-wars Golden Age detective novel.

The earlier Haynes's novels tend to be longer, with greater emphasis on emotional travails, while the later ones are shorter, with more detailed focus on detection.

It is notable in this regard that of Haynes's last six mysteries fully five have series sleuths, while of her first six only two do. (And in that case the sleuth did not actually become a "series sleuth" until three years after his first appearance, when a second novel about a murder case of his was published; in other words, it's not clear that Haynes originally intended for him to be a series sleuth.)

Here is the breakdown:

The four Stoddart and Harbord mysteries have been discussed by me here (and links to reviews of the books can be found here and here). In this post I want to say a bit more about the three Inspector Furnival mysteries, particularly, on this occasion, the first: The Abbey Court Murder.

I have already reviewed The House in Charlton Crescent here.  In my opinion it is the first of the Annie Haynes mysteries to be composed fully in the style of of the "modern" detective novel, closely resembling the sort of fiction being written at this time by such early Golden Age masters of the form as Agatha Christie and Freeman Wills Crofts.

The Crow's Inn Tragedy, which closely followed Charlton Crescent, is similarly designed, though it introduces another element one often finds in 'twenties mysteries: the criminal gang. (Despite this aspect to the tale, the book is definitely a detective novel, not a "thriller").  However, I will discuss Tragedy more later, so let me move on to Abbey Court, a rather fascinating book, I think.


The Abbey Court Murder was published in 1923, but it actually appeared originally in serial form about a decade earlier, in 1912-1913; and it was reprinted serially around the world a number of times in the 1910s.  Why Haynes decided at this time to publish an older serialized novel in book form, I don't know; perhaps her publisher was eager for an immediate follow-up to her hit debut crime tale, The Bungalow Mystery.

Tellingly, The Abbey Court Murder went under the title Lady Carew's Secret when it was published serially.  To anyone remotely familiar with the Victorian sensation novel, this title will recall Mary Braddon's smash sensation tale Lady Audley's Secret, a triple-decker novel that was originally published in 1862, just three years before Annie Haynes was born, and is one of the enduring mystery classics of its day.  Readers also likely will note certain resemblances to Charles Dickens's Bleak House and some of the sensation fiction of Wilkie Collins.


So this is to say that, despite first being published in book form in 1923, the year of the appearance of Christie's Murder on the Links, Crofts's The Groote Park Murder and Dorothy L. Sayers's classic debut mystery, Whose Body?, The Abbey Court Murder seems something more of an earlier period piece (though in fact I would argue that both of these particular Christie and Crofts novels have something of the flavor of older mystery fiction as well). 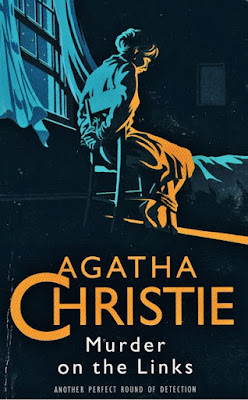 Yet, like Haynes's later detective fiction, Abbey Court is, I found, a hugely readable yarn; I finished it in two days. Once you start The Abbey Court Murder, I predict that you will want to keep going until you find out just what Lady Carew's horrible secret is and what its deadly ramifications will be.

Abbey Court opens a few years after beautiful Judith Carew's marriage to Sir Anthony Carew, the half-brother of pretty young Peggy Carew, her former charge as governess at Heron's Carew.  The couple have a young son, Paul, and live in happily wedded bliss until one day when Lady Carew, after attending a London wedding, encounters outside the church a sinister man from her past, someone about whom her husband has never been told, someone, indeed, whom she believed was most conveniently dead....

"But I am not dead, Judy.  On the contrary I am very much alive, and--I have come for my own, Judy."

The man demands that "Judy" meet him at 42 Abbey Court to discuss both their unpleasant past and their uncertain future. Under the concerned eye of her husband and the calculating eye of her French lady's maid, Celestine (calculating French lady's maids named Celestine are to Haynes's fiction what dim, adenoidal, housemaids named Gladys are to Christie's), Lady Carew makes plans to keep an undesired assignation at Abbey Court--plans that include arming herself with her husband's revolver.

Someone will die this night at Abbey Court....

And, oh, how the plot does thicken from here!

A woman from Sir Anthony's past pops up too, now widowed and not at all well-disposed toward Judith. Then there is Peggy Carew's suitor, Lord Chesterham, deemed most objectionable by Sir Anthony. And there is intrepid Inspector Furnival, "an unobtrusive-looking little man with a bushy, sandy beard" and "about the keenest-witted detective they have at Scotland Yard." He's determinedly on the hunt for the Abbey Court murderer, and the trail he's following just may take him, much to Lady Carew's mortification, to Heron's Carew....